Donate to help us reach our web update project goal! 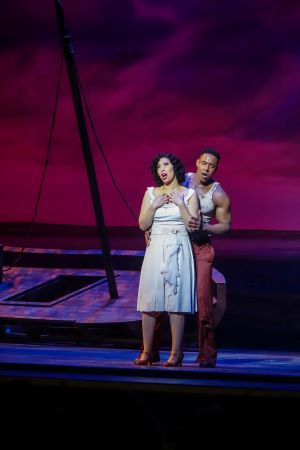 Curiously enough, Opera Carolina didn't get around to producing the Gershwin Brothers' Porgy and Bess – an opera incomparably suffused with the sounds, scents, and DNA of the Carolinas – until its 33rd season in 1980. Turns out that was somewhat bolder than Spoleto Festival USA, which waited until its 40th anniversary in 2016 to bring this opera to Charleston, where the story is set, and where its creator/librettist DuBose Heyward was born. It can be argued that the snooty world of opera recordings was even more hesitant to acknowledge this American classic, issuing the first full-length CD edition in 1976, a full 41 years after the Boston and Broadway premieres. Hesitancy has lingered a little at Opera Carolina, which brought back new homegrown productions of Porgy and Bess to Belk Theater in 1995 and 2003, but no others until now. OpCarolina did bring us a touring version in 2010, commemorating the 75th anniversary of the Broadway premiere, but that fiasco is best forgotten. A couple more touring versions have come our way over the past quarter century. The best of these was at the Belk in 2014, the touring version of the slimmed-down 2012 Broadway revival that had starred Audra McDonald and Norm Lewis (who just happened to be performing in the touring version of A Soldier's Play as it finished up its two-week Charlotte run down the block at Knight Theater). In comparison to that estimable touring treat, the new Opera Carolina production conducted by artistic director James Meena did not need to blush. At the Sunday matinee premiere, Sequina DuBose reprised her role of Clara from the Broadway tour while Nicole Cabell, featured as Clara – who sings the incandescent "Summertime" – on Decca's landmark 2006 recording of the original 1935 Broadway score, made her Charlotte debut as Bess. Kenneth Overton, who was billed as the star of that infamous 75th-anniversary tour and was replaced by a fifth-string singer at Ovens Auditorium whose name could not be determined until five days later, finally got his chance to impress as Porgy. No less prestigious, Victor Ryan Robertson gave us a taste of what made the ornate Spoleto production so splendid by reprising his slickster grace as Sportin' Life.     Read on . . .

NCCMI's 'Music by Black Composers' is a MLK Day Treasure