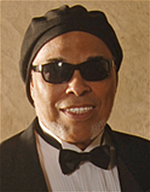 Elmer Gibson began his studies of piano with Irwin Gelber and trumpet with Sigmund Herring of the Philadelphia Orchestra at the Settlement School of Music in Philadelphia, Pennsylvania. Since the mid '60s, Gibson has been writing, arranging, and performing music around the world with some of jazz's finest musicians. When not playing with his own group, he's been performing and recording with many local and nationally known jazz artists. Gibson has toured the U.S. performing at the Newport Jazz Festival, the Berkeley Jazz Festival, the Piccolo Spoleto Festival in Charleston SC, the San Jose Music Festival, the Pleasure Island Jazz, Blues and Seafood Festival in NC, Bel Cher Festival in Asheville NC, and The New Bern Jazz and Blues Festival in New Bern, NC.

Hillsborough Arts Council's Parlor Jazz Series – Is This the Wave of the Future?

Herbie Hancock at UNC: That's Why It's Called "Jazz"

Completely at Home in the Stream: Salmon is a Jumpin'