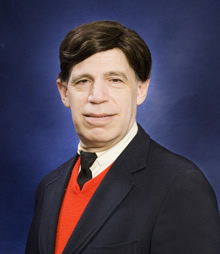 Mark Evans, Ph.D, is a composer, conductor, pianist, and organist with a multifaceted background in music, writing, broadcasting, and education. He hosts the popular, “Mark! My Words,” television program and is founder and president of “Cultural Conservation,” a foundation, “dedicated to the principle that society should preserve its cultural resources with the same care and devotion that a nation devotes to its natural resources.” He began his broadcasting career on radio, producing 500 radio programs under his trademarked title, “Mark! My Words,” also the name of his newspaper column in The New York City Tribune and his series which airs on the Pinehurst, North Carolina television station he founded

Mark Evans literally grew up in the world of film music in Hollywood. He was a private pupil of such renowned composers as Mario Castelnuovo-Tedesco and Roy Harris. His book, Soundtrack: The Music of the Movies, has been recognized as the definitive book on the history of film scoring. As a writer and lyricist, he is the author of numerous books for adults and children and has collaborated on books with such varied personalities as Robert Stack and Xavier Cugat.

His book, also titled Mark! My Words, is subtitled “How to Discover the Joy of Music, the Delight of Language, and the Pride of Achievement in the Age of Trash Talk and MTV” (reviewed here). It was the first major book to address our current cultural crisis and to provide positive solutions that can impact your life and the state of our culture.

His most recent book is Our Musical Heritage: From 'Yankee Doodle' to Carnegie Hall, Broadwayv and The Hollywood Sound Stage. It is a guided tour through four important genres of music, concert works, jazz, musical theater, and film scores. The book was written to provide parents, grandparents, and teachers a resource to share the story of how music played an important role in the development of our country and to introduce their children and grandchildren to our true musical heritage