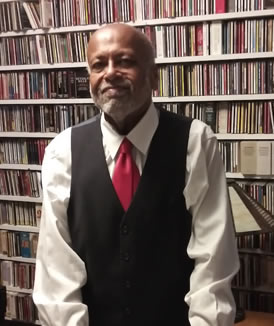 A native of Pittsburgh, Curry started conducting and composing music at age 14. His first major appointment was at age 21 when he was named Assistant Conductor of the Richmond Chamber Orchestra. On the same day, he was called in to replace a conductor who suddenly became ill for a performance of Beethoven’s Ninth Symphony. Maestro Curry’s unexpected debut was hailed by the critics and audience alike. He went on to serve as Resident Conductor with the Baltimore Symphony for six years (1978-1983) and with the St. Paul Chamber Orchestra for two years (1983-1985).

Maestro Curry was appointed Associate Conductor of the Indianapolis Symphony in 1983, a post he held until 1988, the same year he was named winner of the Leopold Stokowski Conducting Competition and performed in Carnegie Hall. He was feature conductor for the tour and recording of Anthony Davis’s Grammy-nominated opera X. He has also conducted opera productions with the New York City Opera, the Houston Grand Opera and the Chicago Opera Theatre.

Maestro Curry has conducted over forty orchestras, including appearances with the Chicago, Cleveland, Houston, National, Detroit, Denver, American and San Diego symphonies and the Los Angeles Philharmonic. In November of 1997 he made his debut in Israel with the Israel Camerata Jerusalem orchestra; he has also conducted orchestras in Bangkok and Taiwan. In the 2002-03 season he made appearances as guest conductor with the Indianapolis, Detroit, and New Jersey orchestras. He made his conducting debut in December 2002 with the New York City Ballet in their famed Balanchine production of The Nutcracker. Guest conducting reengagements include a return to the Indianapolis Symphony and the New York City Ballet, as well as debut performances with the Chicago Symphony and the Los Angeles Philharmonic.

Maestro Curry is also a composer, and his works have been played by many of America’s finest orchestras. On June 13, 1999, the Indianapolis Symphony premièred his work, Eulogy for a Dream. This work, based on the speeches and writings of Dr. Martin Luther King, Jr., was a tremendous success and received a standing ovation. This piece was broadcast nationally in January 2000 on the National Public Radio program Performance Today.

Maestro Curry is also committed to new music and has conducted premières by, among others, Schwantner, Bolcom, Foss and Hailstork. The range of artists Maestro Curry has worked with in his career run the gamut from Zubin Mehta and Aaron Copland to John Williams and Ella Fitzgerald. In addition, he has been a beacon for promising young musicians both as an instructor at the Peabody Conservatory and the Baltimore School for the Arts, and as a mentor.

Persichetti-Lincoln-Nixon – a Study in Inaugural Politics

Richard Strauss' Metamorphosen as a Contextual Memorial/Eulogy for 2020

Camelot and its Creators

Bernstein's White House Musical, 1600 Pennsylvania Avenue, and What it May Mean Today