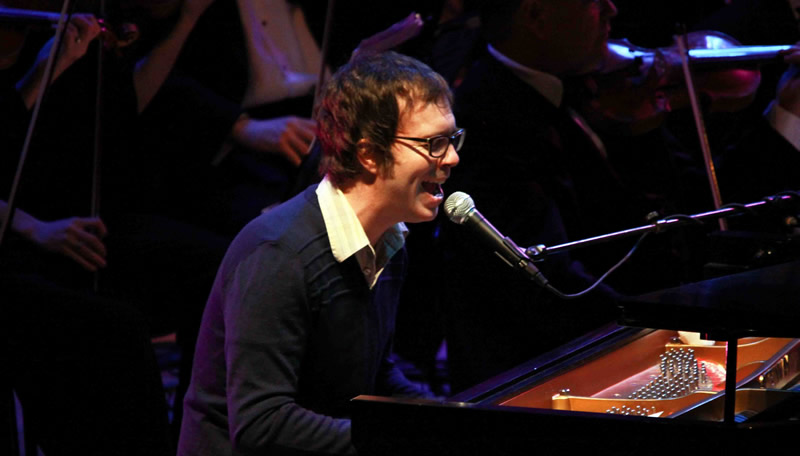 An unprecedented crowd filled Koka Booth Amphitheatre in the North Carolina Symphony's latest Summerfest installment. In fact, the performance, featuring famed singer-songwriter and pianist Ben Folds, made history as the largest audience for a Summerfest concert ever. While it is true that Folds is a native Tar Heel (born and raised in Winston-Salem), his career and renown have spread worldwide. This highly anticipated concert did not disappoint, with eager concertgoers already packed in the amphitheater more than an hour before the music began. Conductor Edwin Outwater led with an easy-going and gentle style, erring on the side of strict precision when necessary, to marry Folds' music with the orchestra behind them.

Even long-time Folds fans were in for a new experience in this concert – Folds' plethora of studio recordings, from both earlier Ben Folds Five years and his solo career, include only one album backed by an entire live symphony orchestra, 2017's Live in Perth with the West Australian Symphony Orchestra. The orchestral arrangements brought to life in Koka Booth were wonderful and, at times, shockingly intricate. The NC Symphony's role was that of an equal partner, not mere accompaniment; instrument sections and even individual players were singled out for gorgeous interludes, countermelodies, and ornaments. A wide variety of Folds' music, from his funky, up tempo songs to his ballads, was featured in this way.

The first song of the night was more of the former – "Zak and Sara" began with a fanfare-like introduction (during which Folds took the stage), then unfolded to be bouncy and boisterous. The Ben Folds Five throwback "Steven's Last Night in Town" was another bold hit, featuring the brass and percussion sections for an effervescent jazz style. The rollicking, sassy anthem "One Angry Dwarf and 200 Solemn Faces" found the whole orchestra powerfully supporting the piano's bass groove. Songs like "Jesusland," "Landed," and of course, "The Luckiest" were more pared down, showcasing Folds' consistent vocal nuance and piano skills that ranged from delicate arpeggios to full pop-ballad style. In the middle of "The Luckiest," gentle strings snuck in to support the melody, perfectly balanced with the piano. This was the penultimate song on the program, and was quite beautiful.

Despite all these beloved favorites in Folds' discography, perhaps the highlight of this concert was something entirely improvised – the song "Rock This Bitch" is a long-running joke between Folds and his fans, and resulted in a new song being composed and performed on the spot. Folds went section to section, humorously dictating what he wanted the orchestra to play with "vague directions" (his words). The end result from this slapdash style did not sound improvised at all, thanks to the NC Symphony's expertise, Outwaters' flexibility, and of course Folds' irreverent musical fluidity. The infectious, jazzy beat featured lyrics about "the mean streets of Cary" and a dazzling saxophone solo. To close the concert, the musicians onstage erupted into a joyful, brassy performance of "Army," saying goodbye and sending the audience off to navigate those "mean streets."