The Gift of Music: Women's Voices Chorus and Allan Friedman 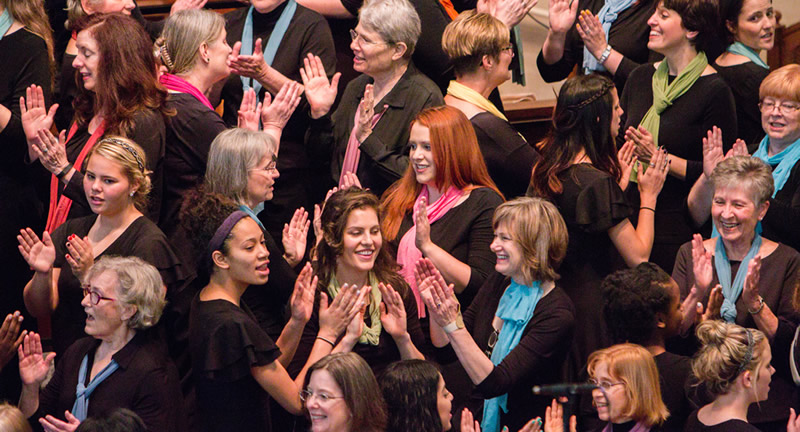 Women's Voices Chorus, founded in 1989 by the dedicated and committed Mary Lycan, and nurtured for the past twelve years under the skilled and congenial Allan Friedman, reached a landmark achievement with this final program, after which he steps aside from the chorus and the singers pursue the next stage of their artistic and development. Friedman leaves a remarkable reputation of excellence in technical and artistic achievement that was nowhere more beautifully expressed than in the "Farewell, Allan" addressed to him from the members of the Women's Voices Chorus and printed on the first page of the concert program:

"FAREWELL, ALLAN. The members of WVC thank you for the many ways you have helped us grow during the past 12 years. You have taught us songs in more than 36 languages in myriad rhythms; improved our tone through "tall vowel" drills and our listening skills in small mixed groups; expanded our stylistic variety from Vivaldi to boogie-woogie to spirituals; and enhanced our cultural understanding through two international tours. We've sung your new pieces and you've spread our names across the globe via an international composer competition. Throughout you've shown us patience, compassion, and empathy, and you've laughed and cried with us. We love you for it all! We'll miss you and we wish you the best in your new endeavors."

Women's Voices Chorus has established itself as a hard-working, enthusiastic musical ensemble, willing to tackle all kinds of challenges, making strong women stronger and sharing their skill and joy of singing with a growing and appreciative audience. We look forward to all the future will bring. A tribute should also be sounded out for Deborah Hollis, their outstanding pianist.

The sold-out program, which took place in the Moeser Auditorium in Hill Hall on the UNC campus in Chapel Hill, began with the Appalachian hymn classic "Will the Circle Be Unbroken," arranged by J. David Moore. The text was the 2001 reworking by folk singers Betsy Rose, Cathy Winter, and Marcia Taylor. Inspired by two familiar styles – the Dolly Parton bluegrass trio and the gospel quartet – Women's Voices took to both in their sparkling a cappella rendition, drawing us in with magnetic enthusiasm. "The March of the Women" is a women's suffragette poem by Cicely Hamilton. The music was composed in 1911 by Dame Ethel Mary Smyth, who has been described as "a woman of boisterous vitality" (from the publisher's background notes). Hearing the women belt out this powerful, almost Wagnerian, piece, no one could doubt that it became the battle cry of the British suffrage movement. Hollis' piano accompaniment supplied additional lift and energy to the women's rousing performance.

Margaret Walker's poem "Lineage" tells of the strength of the pioneer grandmothers, plowing, sewing seed, sturdy women, holding memories. It ends with the perhaps rhetorical question: Why am I not as they? Andrea Ramsey's rhythmic setting, enhanced with percussion performed by Tim Turkington and Les Webster, portrayed a basic wonder and a sort of awe in the strength of the grandmothers and ambition to find that strength in themselves. The singing was gorgeous, in harmonic balance.

The WVC Chamber Choir took the stage for the next two pieces, both sung without accompaniment. Roger Bourland's setting of a poem by Francisco X. Alarcón. "A Small but Fateful Victory" tells the story in song of one girl's earth-shaking dinnertime rebellion. The whimsical text was sung with grace and light wit.

Next, the fifteen-voice chorus sang a beautiful rendition of the heart-rending spiritual "Sometimes I Feel Like a Motherless Child," arranged by Nina Gilbert. It was delivered with rich expression and strongly felt empathy.

The Capital City Girls Choir Chorale, under the direction of Amy Davis, and with piano accompanist Pam Stewart, gave a lovely performance of Emily Dickenson's "Will There Really Be a Morning?" in the meditative musical setting by Craig Hella Johnson.

Women's Voices Chorus returned to the stage to sing Kahlil Gibran's true words for understanding our children, arranged for singing by Ysaye M. Barnwell. It is titled "On Children" and was sung in straightforward, rich harmony, as trained by Friedman.

The sub-title is "(Gaaggee Zaag'aa)." It further included such special effects as divided choir clapping, plucking strings with a credit card and overtone singing with the piano performing as part of the ensemble rather than in the traditional accompaniment role. Friedman led the performance with precision and passion to provide an awesome choral experience, embedding the poet's sentiment, "There is no time to be afraid. There is only time to love." The audience responded with an enthusiastic standing ovation.

Walter Robinson's poem in first person, "Harriet Tubman," has the grand designer of the Underground Railroad inviting all the slaves, from the ones that Moses led to those of "'bout eighteen-fifty," to come on board. Set to music by Robinson and arranged for women's chorus by Kathleen McGuire, it was a train ride not to be forgotten. WVC gave it an exciting and impassioned reading, with tone-painting adding special train effects. Les Webster contributed percussion support.

Rosemary Jefford's setting of Maya Angelou's "Rising Like Tides" provided the program title for this concert: "Still I Rise" and the defiant self-respect, persistent in the face of slavery and all its cruelties. The singing matched Angelou's dignity, strength and determination.

The closing selection, a traditional spiritual, arranged by Paul Caldwell and Sean Ivory, was "Ain't No Grave Can Hold My Body Down." The text is attributed to Brother Claude Ely. This is one of the pieces memorized and absorbed by Women's Voices Chorus. They claimed it as their own, singing with outstanding vigor, precision, and winsome confidence. Added to this was the equal musicality of Hollis' swinging piano accompaniment, making for a superb train ride.

The well-chosen encore was "Grace Before Sleep," Susan LaBarr's musical setting of Sara Teasdale's poem. It was like a meditative amen, summarizing all that had gone before, including the remarkable twelve-year relationship between choir and director.

It was an outstanding landmark event.