Another Grand and Glorious Fifth 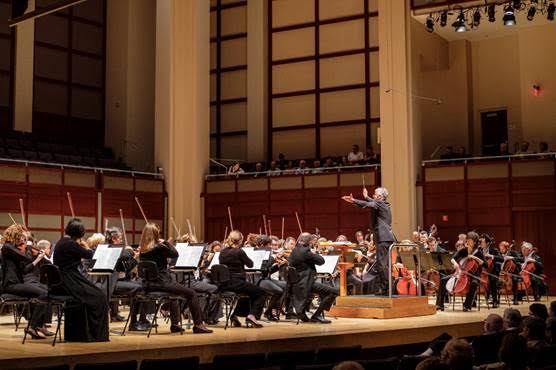 The North Carolina Symphony with Grant Llewellyn at the helm was joined by the North Carolina Master Chorale, Alfred E. Sturgis, director, and pianist Andrew Tyson for the opening concert of the 2018-2019 concert season.

The all-Beethoven concert began with the Overture to Fidelio, Op. 72(c). Beethoven's only completed opera was first introduced to the public in 1805 as Leonora, the name of the faithful and brave wife who rescues her husband from unjust political imprisonment. After several revisions and the composition of three different overtures, the opera was produced in 1814 under the title of Fidelio with the Overture to Fidelio in E, Op. 72. In most performances, the opera is preceded by the "Fidelio" Overture with the more dramatic, magnificent "Leonora No. 3" frequently played as an entr'acte between the two acts. It was an interesting concert experience to hear this light and melodic piece which is seldom performed as a concert piece.

Pianist Tyson, a Durham native, has had ties to the Triangle throughout his career. He won the Eastern Music Festival Concerto Competition at the age of 15 and studied with Dr. Thomas Otten at the University of North Carolina. Previous performances with the North Carolina Symphony include season opening concerts in New Bern, Southern Pines. and Wilmington. During last season, he appeared widely in the United States and Europe.

Tyson's pianistic skills sparkled throughout the next selection – Beethoven's Rondo for Piano and Orchestra in B-flat. Composed when he was 23, Beethoven chose never to submit this piece for publication. It was conceived as the final movement of his second piano concerto but replaced by the later published version. The Rondo was eventually published in 1829 after Beethoven's death, with the solo part completed by Carl Czerny. The composition consists of a single multi-tempo movement marked Rondo: Allegro – Andante – Tempo I – Presto. Though it contains some original elements, it is Mozartian through and through. It was in striking contrast to the Choral Fantasy that followed.

An all-Beethoven concert in Vienna in 1808 included premieres of the Fifth and Sixth Symphonies, the Fourth Piano Concerto, a concert aria and three movements of the Mass in C. Beethoven decided to write a special climactic and concluding piece that would include all of the performing artists. He performed the extended piano solo himself – certainly improvisationally. In less than three weeks, Beethoven had pieced together the Choral Fantasy.

Written some 15 years after the Rondo that had just been heard, this is the Beethoven of creative energy, power, and emotional impact.

Tyson's rendition of the solo piano introduction was masterful. His technical skill included sparkling runs, shimmering trills, and intense and powerful chordal passages. When the piano paused, the cellos and double basses offered a calmer theme, the violas offered their assent, and then the whole orchestra became engaged in a conversation of variations. Much of this music has seeds in it that were to bloom more fully some years later in the Ninth Symphony. When the chorus joined in with its marvelous blend of human sonorities, the fantasy was complete, full, and triumphant. This was a magnificent performance.

When it comes to classical music in a social conversation, you can count on someone saying, "Oh yes..., da, da, da, dah." As concertgoers returned to their seats for the North Carolina Symphony's performance of Beethoven's Fifth Symphony, I heard someone displaying their familiarity of that iconic work: "da, da, da, dah." It is unique among all symphonies; there is not another one to compare it with. That thematic four-note snippet that becomes a 35-minute or so unified, diverse, balanced piece of music – a symphony.

It has been my joy to have heard many performances by some of the world's greatest ensembles and also amateur and student groups. It is so familiar now that I have to work harder and dig deeper to uncover insights I may have missed before. Some little surprises occurred in this performance: There was generous but uneasy applause after the first movement. Most concert-goers know that it is traditional to hold applause till the end of a multi-movement piece. Llewellyn turned slowly to the audience and acknowledged the applause with sly expression as if saying, "I know you know you are not supposed to do that, but let's do it anyway." After the second movement, there was more timid applause, leading Llewellyn to turn to the audience again and lift his hands up as though calling for more. I felt he was saying, "Come on. Don't be timid. That performance was worth more!" And the applause increased and the conductor acknowledged it and waved it on toward the orchestra. After the third movement no one applauded...; Beethoven tricked us all. He wrote a transition that moved the third movement into the fourth without a pause.

There were many great moments in this performance: a clarinet line in the second movement that you might have missed if you were not especially attentive, a piccolo solo in the fourth movement that cut through and soared above all else, that triumphant trombone entrance at the beginning of the fourth movement, the wondrous lyricism of the strings in the second movement, and more. This was another grand and glorious Fifth.

This program will be repeated on Saturday, September 22. See our sidebar for details.