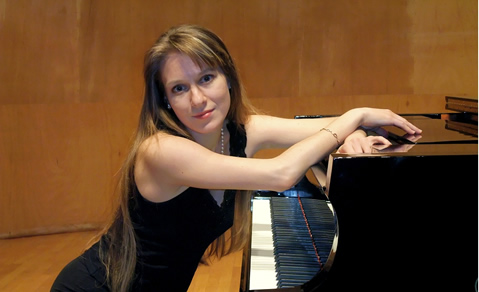 The auditorium of the North Carolina Museum of Art and its resident Steinway concert grand piano were graced by the presence of pianist Elizaveta Ivanova as she performed the second recital of this year's Paderewski Festival. The quietness of the audience during the entire program testified to the way her playing entranced her listeners; not a single cough was to interrupt her scintillating performances.

Ivanova makes music. The music is everything; this pianist isn't performing for applause – that just delays getting back to making music. Indeed, she could allow a few more seconds to pass between movements, just to allow the effect of the previous movement to settle in before changing moods in the next portion of a work. Her movements at the keyboard are always natural, never affected.

She is also a harpsichordist, and echoes of that technique appeared in the program's first work, Sergei Rachmaninov's transcription for piano of three movements of J.S. Bach's Partita in E for unaccompanied violin (BWV 1006). The Prelude, with Rachmaninov's added countermelodies ornamenting Bach's original solo line both above and below, was effervescent; the gavotte bounced, the gigue danced. Clarity was everywhere, but never a single mechanical measure.

Six preludes by Claude Debussy followed, each one appropriately colored and framed by Ivanova's exemplary pedaling, a technique so critical to Debussy's atmospheric music. We heard mists, a Habanera with (in the composer's words) "brusque oppositions of extreme violence and sweet passion," fairies dancing, the eccentric General Lavine in his cake-walk, the sad serenity of a canopic jar, and fireworks. Ivanova's performances were personal reflections of Debussy's own musical portraits; each was a gem.

Only a generation removed from Debussy, the music of Polish composer Karol Szymanowski has led him to be hailed as one of the 20th century's greats. Ivanova's performance of "Don Juan's Serenade," from Masks (Op. 34, No. 3) was energetic and masterful, reveling in Szymanowski's ground-breaking harmonic language.

Then Chopin – not a prelude or a waltz, but the most dramatic of the four Scherzos, No. 3 in C-sharp minor, Op. 39. Everything was as it should be: the double-octave passages thundered, the filigree passages flowed smoothly, the melodic lines of the trio sang, the romantic soul of Chopin being clearly channeled by this young pianist whose playing already calls to my mind that of Hélène Grimaud. Her finger independence and control should serve as "a consummation devoutly to be wished" for every aspiring pianist.

After a brief intermission, we heard the welcome nod to the festival's namesake, with Paderewski's famous "Menuet" receiving a Paderewskian-style performance, followed by the more energetic "Tatra Dance."

The concert closed with more Chopin: a nocturne (D-flat, Op. 27, no. 2) and a sonata (No. 3, in B minor, Op. 58). The Nocturne's melodies, sometimes in one voice, sometimes in two, sang exquisitely as Ivanova caressed their gentle harmonic support. The Sonata's four movements (Allegro maestoso, Scherzo (molto vivace), Largo, and Finale) demand total command of piano technique. Ivanova has these techniques to burn, but they are always at the service of the music. The Largo, the least "showy" of the Sonata's four movements, is perhaps the most difficult to communicate; Ivanova infused it with an emotional content making this gentle rhapsody one of the afternoon's highlights. The Finale, with its cascades of perpetual-motion sixteenth-notes, glittered in a golden performance.

The Festival continues with recitals on November 11 and November 12, each at 3:00 pm at the NC Art Museum. See our calendar for details.