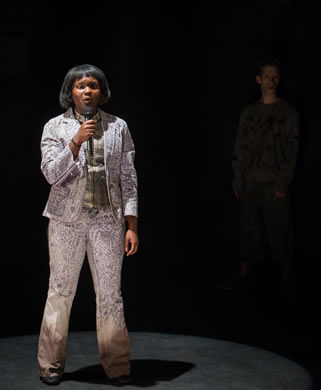 Burning Coal Theatre Company opens its 2017-18 season with a new work written by Tom Stoppard titled Darkside, a play that he gives credit of co-authorship to the British rock group Pink Floyd. The reason is obvious: Stoppard has taken the iconic Pink Floyd album Dark Side of the Moon and used it as a soundtrack to his one-hour dark comedy. The play opened this past Thursday at Burning Coal in an East Coast premiere.

The album, which has gone platinum since its inception in 1973, is known worldwide and has gone through a number of transformations since that time. While the members of the band say that the concept album deals with the stresses and strains of everyday life – Time, Money, "Out of the way, it's a busy day" – the nod and wink that goes along with that statement is to cover the fact that the disc – with titles like "Brain Damage" and "Eclipse" – deals with madness. As does Stoppard's play.

Stoppard, using this as a basis for what is an existentialist examination of various points of view on Life, focuses on a young impressionable woman named Emily (Davitta Singletary) who is seeking the Meaning of Life. She has barely started her search when she is witness to a near-fatal train wreck that is miraculously avoided by the actions of "Ethics Man," who saves a trainload of people from dying by allowing the train to run over a young Boy (Cody Hill).

Well, not really. Turns out the entire episode is a "thought experiment" to examine if it is allowable, even preferable, to allow the death of a single individual if doing so will save the lives of many. This question is posed in a class Emily is taking, taught by Mr. Baggott (Brian Linden). But this experiment opens a new pathway in Emily's mind, which she immediately takes, by befriending the now-dead Boy and enlisting him in her search for the Meaning of Life.

The work is staged on an amazingly facile set of complete black, upon which is splashed a complicated and mind-numbing film that runs off-and-on throughout the entire show. We come to realize that this is Emily's concept of reality. Designed by Margaux Maeght, this set is a seemingly solid wall, but it's made of acoustic foam, which allows a lot of things to happen that "shouldn't." People come and go through various points in the wall, through multiple doors on multiple levels, and seem to enter various stages of "being." It is a technological wonder, and earns Maeght kudos for an excellently adaptable set.

Emily and the Boy proceed on Emily's quest to find the Meaning of Life, something with which, apparently, the Boy is quite familiar; he leads Emily on a long journey up a mountain to meet a mystic Prophet (Vincent Bland), who indeed tells her the Meaning of Life, which is, "This is not a drill." Emily, disappointed, says her mother has been telling her that for years.

All of this takes place while the soundtrack continues through "Dark Side of the Moon." The Madness which must be a part of this comes over Emily. She is encouraged by the Boy to experience her Goal in Life. She has told him what it is, but when the time comes, as is often the case, she is not ready. Still, she goes for it. When it is over, everything seems to have gone well; her Mindscape is beginning to turn green with life. But she is challenged immediately by the Witch Finder (Marc Geller), who accuses her of witchcraft and "jails" her in an asylum.

It must be noted here that the viewer also needs a certain mindset if this play is to work. Remember, this is a Tom Stoppard play. If you take it literally, you are lost. Only in a Stoppard comedy are you likely to meet Fatman (Juan Isler), who in his own battles with reality has grown to 400 pounds. Or the Banker (money) and the Politician (power), who, despite protestations to the contrary, are in bed together. Fred Corlett as the Banker and Mac McCord as the Politician were very happy together, and performed an intricate and enthusiastic dance, which was the highlight of the show. Opening night's audience gave them rousing applause.

As is true about any Burning Coal production, all the stops have been pulled out to give this show a spectacular performance. From intricate and versatile staging to stunning performances, the viewer of Darkside is washed in theatre. This multimedia performance gave us the complete package: theatre, music, fine characterizations, and superb staging. Leading this octet of fine, if bizarre, characters is Singletary as Emily, who travels from wide-eyed innocence, through self-knowledge, then doubt, and finally into madness. Singletary was a marvel, and led a stellar cast on a wild chase. The show was a rollercoaster ride through the mind, and you may decide that you require a seatbelt. Director Palina Jonsdottir has guided these zany characters through the mind's maze, and you're going to want to go along.

Remember earlier when we talked about examining various points of view on the Meaning of Life? Stoppard's seems to be that "It's a Jungle out there," and that we need to be very careful, or we may be defeated, not necessarily by reality, but more probably by our own inability to deal with it. There is a school of thought that maintains that the true definition of Sanity is one's ability to weave one's own insanity into the insanity that is the World. If ever there was a play written to encompass that theory, this is it.

Darkside continues through Sunday, October 29. For more details on this production, please view the sidebar.