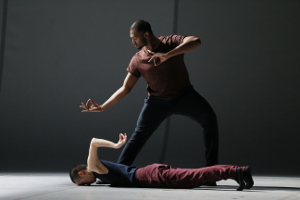 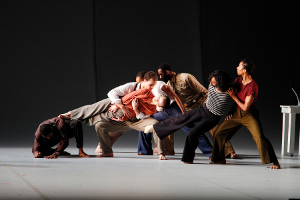 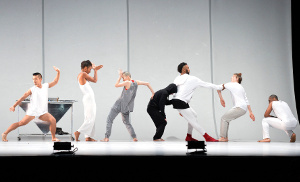 Bill T. Jones with Associate Artistic Director, Janet Wong, and his company, developed three evening-length works titled Analogy: A Trilogy. The complete trilogy, performed for the first time at ADF, brings into light the different types of war we fight and, in particular, the war within ourselves. Works to be performed are Analogy/Dora:Tramontane, Analogy/Lance: Pretty aka the Escape Artist, and the ADF-commissioned Analogy/Ambros:The Emigrant.

The Bill T. Jones/Arnie Zane Company was born in 1982 out of an 11-year collaboration between Bill T. Jones and Arnie Zane (1948–1988). During this time, they redefined the duet form and foreshadowed issues of identity, form and social commentary that would change the face of American dance. The company has performed worldwide in over 200 cities in 40 countries on every major continent and is recognized as one of the most innovative and powerful forces in the dance-theater world.

The repertory of the Bill T. Jones/Arnie Zane Company is widely varied in its subject matter, visual imagery and stylistic approach to movement, voice and stagecraft and includes musically-driven works as well as works using a variety of texts. The company has been acknowledged for its intensely collaborative method of creation that has included artists as diverse as Keith Haring, Cassandra Wilson, The Orion String Quartet, the Chamber Society of Lincoln Center, Fred Hersch, Jenny Holzer, Robert Longo, Julius Hemphill and Daniel Bernard Roumain, among others. The collaborations of the Bill T. Jones/Arnie Zane Dance Company with visual artists were the subject ofArt Performs Life (1998), a groundbreaking exhibition at the Walker Art Center in Minneapolis, MN.

Some of its most celebrated creations are evening length works including Last Supper at Uncle Tom's Cabin/The Promised Land (1990, Next Wave Festival at the Brooklyn Academy of Music);Still/Here (1994, Biennale de la Danse in Lyon, France); We Set Out Early… Visibility Was Poor(1996, Hancher Auditorium,Iowa City, IA); You Walk? (2000, European Capital of Culture 2000,Bolgna, Italy); Blind Date (2006, Peak Performances at Montclair State University);Chapel/Chapter (2006, Harlem Stage Gatehouse); and Fondly Do We Hope… Fervently Do We Pray(2009, Ravinia Festival, Highland Park, IL). The ongoing, site-specific, Another Evening was last performed in its seventh incarnation as Another Evening: Venice/Arsenale (2010, La Biennale di Venezia).

The company has received numerous awards, including New York Dance and Performance Awards ("Bessie") for Chapel/Chapter at Harlem Stage (2006), The Table Project (2001), D-Man in the Waters (1989 and 2001), musical scoring and costume design for Last Supper at Uncle Tom's Cabin/The Promised Land (1990) and for the groundbreaking Joyce Theater season (1986). The Company was nominated for the 1999 Laurence Olivier Award for "Outstanding Achievement in Dance and Best New Dance Production" for We Set Out Early… Visibility was Poor.

The company celebrated its landmark 20th anniversary at the Brooklyn Academy of Music with 37 guest artists including Susan Sarandon, Cassandra Wilson and Vernon Reid. The Phantom Project: The 20th Season presented a diverse repertoire of over 15 revivals and new works.

During the company's 25th anniversary season in 2007, Ravinia Festival in Highland Park, IL offered the company its most significant commission to date: to create a work to honor the bicentennial of Abraham Lincoln's birth. The company created three new productions in response:100 Migrations (2008), a site-specific community performance project; Serenade/The Proposition(2008), examining the nature of history; and Fondly Do We Hope… Fervently Do We Pray (2009), the making of which is the subject of a feature-length documentary by Kartemquin Films entitled A Good Man, broadcast on PBS American Masters in 2011.

The company has distinguished itself through extensive community outreach and educational programs, including partnerships with Bard College, where company members teach an innovative curriculum rooted in the company's creative model and highly collaborative methods; and with Lincoln Center Institute, which uses company works in its educator-training and in-school repertory programs. University and college dance programs throughout the US work with the company to reconstruct significant works for their students. The company conducts intensive workshops for professional and pre-professional dancers and produces a broad range of discussion events at home and on the road, all born from the strong desire to "participate in the world of ideas."

Analogy/Ambros: The Emigrant is commissioned by ADF with support from the Doris Duke/SHS Foundations Award for New Works and the Reinhart Fund.

Join us for a special book club event Saturday July 29th, 1:00-2:30pm in the South Regional Library Meeting Room (4505 S. Alston Ave. Durham, NC 27713 ) with choreographer Bill T. Jones on the inspiration for his latest work, Analogy/Ambros: The Emigrant, to premiere that evening at DPAC. We will discuss the novel The Emigrants by W.G. Sebald, which served as the basis for the work. Find your copy today and join the conversation!