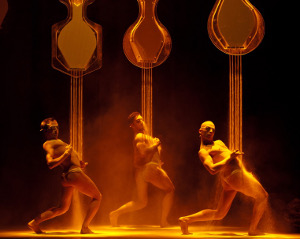 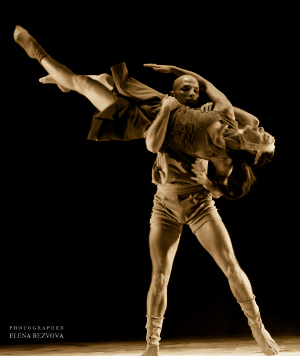 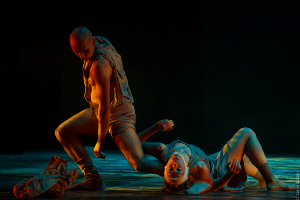 Tatiana Baganova is back at the American Dance Festival with her company, Provincial Dances Theatre. Based in Yekaterinburg, Russia's fourth largest city, located on the Asian side of the Ural Mountains, PDT is an avant-garde troupe that communicates powerfully by any means necessary. They work on the audience by strong dancing and odd movement but also with elaborate and unusual make-up, costuming, sets, lighting and music – all of those more than a little strange.

Baganova has been to the ADF numerous times, participating in the International Choreographers Commissioning Program, and in Past/Forward, and the company has been here, too. This time was a little different, because, after the Durham season ends, the ADF will present the company in its New York debut (Joyce Theater) on a double bill with Rosie Herrera Dance Company. Charles Reinhardt, former ADF director, told me this week that Baganova, Herrera and Shen Wei were the three most thrilling ADF "discoveries" of the 21st century, and the current program will give you a good idea of why he would say that about Baganova's work with Provincial Dances.

Baganova produces surprising stage pictures, some of them like fairytales, torqued; some add up to epics. Some would make the Surrealists blush for the paucity of their compositions; circus performers might weep at others out of envy of the dancers' prowess and daring. Her dances are very difficult to describe because they require the physicality of the performance for the bizarre images and actions to coalesce nonverbally within the viewer. In that sense, her dance is very pure, and for all its grotesqueries and mystifications, it has the clarity of artistic certainty.

This program included Maple Garden and the magnificent Sepia, both of which were born in Durham and raised to maturity halfway around the world in Yekaterinburg. On the 14th, both were more polished and refined than previous iterations seen here, and more powerful due to the quality of the dancing.

Maple Garden is the stranger, and more difficult to parse, but in its Russian fairytale manner, seems to be about lust and its associated cycles of pursuit, evasion, capture, control and escape, and takes place in a dark wood. There's a figure in a tree, and just when you are convinced it is a mannequin, she swings down on her aerial rigging. Anastasiia Sokolova, who stood out in the powerful troupe for her strength, grace and clean movement, was glorious on the rigging, and no less so in all the weird tumbling, big dancing and duckwalking that followed. There were some scenes that were deeply disturbing for their felt truth, such as one in which a man, with his mouth, pulls long strings out of the body of a woman, like a robin pulling up a stretchy worm – only to have the string cut by the giant scissors of Fate. Or when a man consumed a woman by eating up the carrot protruding from her face. Or when the women were pinned to the tree by their long tresses – but one escaped, leaving her hair behind – which was then assumed by a man, as a bird may take over an empty nest. The music involved many owl calls; the total effect was haunting. Each time I've seen this, I've later felt unsure whether I did see it, or if it was all a highly symbolic dream dreamed by Baganova and screened in my sleeping mind. In a word, it was bewitching.

Sepia, on the other hand, once seen, leaves no uncertainty in its wake. Loosely based on Woman in the Dunes by Kobo Abe, Sepia gives form to the Sisyphean efforts required of us all among the sands of life as the sands of time run down. The paradox is one we all know: we want to stop struggling, but to stop is to die – there is no end and no beginning.

The images formed by the dancers were visually amazing, like the opening one of three bare-buttocked men standing beneath the "hour glasses" showering their sand (decorations and costumes by Sokolova), or the three women emerging from a large paper "dune," but many of them may grasp at you like a hand in your belly, twisting, and set your skin alight with the vicarious experience of heat, sweat and sand. Set to fragments of Avet Terteryan's Symphony No. 8, with its extremely deep sounds and relentless pulsing, and danced under complex glowing lighting by Andrey Pleshakov and Nina Indrikson, Sepia was both disturbing and highly encouraging – look! We slide and slip and skid and push and burrow and parch and leave runic marks soon brushed away and …we go on. Maybe not with the strength and balance of these terrifically muscled dancers, but we go on, until the end of Time.

Past reviews of Provincial Dances Theater and Baganova can be read here from ADF performances in 2004, 2006, and 2010.

The program repeats July 15 and 16. See our sidebar for details.