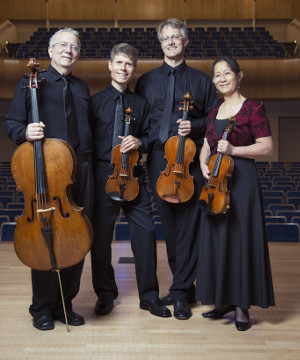 This preview was provided by Chamber Music Raleigh.

On March 6 at 3:00 pm, as part of the Sights and Sounds on Sundays series, Chamber Music Raleigh and the North Carolina Museum of Art are presenting a concert by the Ciompi Quartet plus outstanding musicians from the Triangle. On the program are Beethoven’s Sextet for String Quartet and Two Horns, Op. 81b; Brahms’s Trio for Violin, Piano and Horn, Op. 40; and E Pluribus Unum for string quartet, two horns, piano and bass by local composer Bill Robinson. Robinson has created a work that reflects the playful character of Vollis Simpson's fantastically elaborate mobile sculptures or "whirligigs," of which an outstanding, and large, example (Wind Machine) resides in the Museum's park.

Robinson has pursued an unusual double career in the Triangle area for the last decade. He received BS and PhD degrees from the NC State University Physics Department, and now works as an instructor in the Department. At the same time, he has composed music for a wide variety of ensembles from solo violin to full orchestra, which are increasingly performed by area ensembles and beyond. The Ciompi Quartet has performed his "Variations on Beethoven's Grosse Fuge" at the NC Museum of Art. The eclectic ensemble of performers consists of: The Ciompi Quartet, resident string quartet at Duke; hornists Rachel Niketopoulos and Christopher Caudillof the North Carolina Symphony, pianist R. Larry Todd, also of the Duke music faculty, and well-known local bassist Robbie Link.

Of E Pluribus Unum, Robinson writes, "'Wind Machine’(2002) is a kinetic sculpture powered by fan blades, created by Vollis Simpson, commissioned with funds from William R. and Frances Roberson. E Pluribus Unum (2013) is a composition powered by wind and strings, written by William R. Robinson, son of Frances Robinson, and who is a big fan of The Simpsons. The piece was written with no practical purpose other than to make music with friends." A more extensive description, along with recordings of Mr. Robinson's music, can be found at billrobinsonmusic.com. The title E Pluribus Unum stems from Mr. Robinson's intent to blend the horns in with the strings instead of setting them in opposition.

Newcomers to the area might need a brief introduction to the Ciompi Quartet. Founded in 1965 by renowned violinist Giorgio Ciompi, the quartet has become an integral part of the local music scene, as well as touring nationally and internationally. Violinists Eric Pritchard and Hsiao-mei Ku, violist Jonathan Bagg, and cellist Fred Raimi are all members of the Duke University Music Department, and have concertized together and individually for many years. The program also includes a rarity, Beethoven's Sextet for String Quartet and Two Horns, Op. 81b. This infrequently performed piece is a product of Beethoven's youth, written in 1795 in spite of the high opus number. Once he was famous, wheeler-dealer Beethoven was able to convince publishers to buy several early works which were then published under high opus numbers.

Last on the program is Brahms's Trio for horn, violin, and piano, Op. 40, written in 1865 for natural (valveless) horn. This popular work, written shortly after the death of Brahms's mother, has a gracious, meditative quality in the first and third movements. The energetic Scherzo and boisterous finale evoke hunt scenes.

Chamber Music Raleigh (formerly the Raleigh Chamber Music Guild) has presented world-class chamber ensembles since 1941. The Sights and Sounds on Sundays series, which began in 1999 as a partnership with the North Carolina Museum of Art, presents top North Carolina artists in performances which in one way or another relate to visual art at the Museum. Some programs have complemented visiting exhibitions, while others relate to the Museum's first-rate permanent collection. A docent tour of selected works from the permanent collection precedes the concert. Audience members wishing to participate should meet outside the museum auditorium at 1:45.

Tickets are available online at chambermusicraleigh.org, or at the door, although most performances sell out. The concerts take place in the SECU Auditorium, in the East Building. Admission: Museum members, $12; nonmembers, $14; youth 7-18, $12.