The Cory Band Brings Raleigh On "A Space Odyssey" 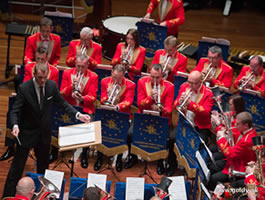 It was certainly amazing that the Cory Band, currently ranked as the number-one brass band in the world, chose to grace the stage of Meymandi Concert Hall as part of the band's first American tour in 40 years. Raleigh was the third stop of an exclusive six-concert tour on the East Coast, and our own Triangle Brass Band facilitated this particular concert. The Cory Band was originally formed in 1884 in South Wales and has been known as the Cory Band since 1895. Today, this band is recognized worldwide as one of the best brass bands in existence, proven by their most recent status as the National Champions of 2015. Based on this information, it is no surprise that this particular concert was sold out – Meymandi was packed with listeners eager to hear the sounds of a quintessential British brass band.

This particular program was titled "A Space Odyssey," and contained works inspired by the universe or parts thereof. A variety of works, including several original pieces and arrangements by conductor Phillip Harper, were sandwiched between popular movie themes at the beginning and end of the concert. The program began quite dramatically, with a voiceover-led version of the theme "Star Trek Into Darkness." Right away, the absolutely impeccable texture of the Cory Band became apparent. The atmosphere they created in Meymandi was electrifying and powerful, without being overbearing. Harper's exuberant conducting style was also fascinating to watch, as he led the band through intense dynamic changes that kept the audience on their toes.

Several pieces throughout the concert featured soloists; principal cornet Tom Hutchinson made multiple appearances in the program. Hutchinson is a formidable solo talent – in 2011, he received the soloist prize at the British Open. With the rest of the band backing him up in the piece "Fire: Fuego!" (part of Harper's work Elemental: The Four Elements of the Universe), Hutchinson shone through jazzy and romantic cadenzas. This particular work was an exploration of musical colors and textures inspired by each element in the universe: fire, air, water, and earth. "Aristotle's Air," composed by award-winning Composer-in-Association Christopher Bond, was a beautiful example of how brass instruments together can create a soft, yet powerful sound. This type of texture is so effective, perhaps because it is unexpected for a brass band. Of course, the Cory Band's sound was pure and perfectly blended. Hutchinson also appeared as one of the soloists in "Constellations" (another Harper creation), and lastly in the Band's two (two!) encores.

Part of what makes a performance by the Cory Band so special is their creation of the concert "experience." This includes spoken introductions of nearly every piece by the conductor, and perhaps most importantly, a sense of humor woven through the entire program. Harper's endearing explanations, as well as a post-interval segment where he read the audience's best tweets (@Coryband), made the whole concert an interactive and fun experience for all. The Triangle Brass Band joined the Cory Band onstage to perform the "John Williams Finale," featuring themes from Star Wars and ET. Together, the two bands brought the house down. And after the two encores with the classics "Stars and Stripes Forever" and "William Tell Overture," it was truly a memorable performance.