Chamber Orchestra of the Triangle Presents Voices Across the Centuries

Lord Nelson Sails Into The Triangle! Also featured: a NC premier by The Dean of African American Composers 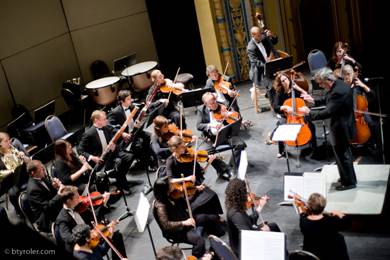 Preview provided by Chamber Orchestra of the Triangle.

On Sunday, January 17 the magnificent "Lord Nelson Mass" of Joseph Haydn will be performed at The Carolina Theatre of Durham by The Concert Singers of Cary and The Chamber Orchestra of the Triangle under the baton of multiple Grammy Award winning conductor Joseph Flummerfelt, Chorus Master of The New York Philharmonic. Considered perhaps Haydn's greatest composition, the mass exudes the virtuosity of his last works. Correctly titled "Missa in Angustiis" (mass for troubled times), the title is certainly appropriate to our own age of anxiety. The mass was first performed just as it seemed the world was doomed to Napoleon's dominion. Almost immediately word reached Vienna of Nelson's great victory! The nickname became "Lord Nelson Mass" forevermore.

This great work features virtuoso solos with exceptionally prominent orchestral and choral work. The Grammy Nominated Flummerfelt/Bernstein "Nelson Mass" as well as other Flummerfelt Grammy winning and nominated recordings are revered. The opportunity to hear his interpretation in the Triangle is a once in a lifetime opportunity.

Also on the program are William Grant Still's “From a Lost Continent" and Ralph Vaughn Williams' "Toward the Unknown Region". Still (1895-1978) is considered the Dean of African American composers as well as a major orchestra and opera conductor, the first black to conduct a major orchestra in 1936 (Los Angeles Philharmonic) and in the South in 1955. The "firsts" in his life are simply too numerous to mention, yet we rarely hear his profoundly moving works performed today. This is a North Carolina premier and only the fourth known performance of this haunting work in the last century!

Rounding out the program is "Toward the Unknown Region" based on poetry of Walt Whitman whose work Williams used on multiple occasions. It was composed over several years and premiered in 1907 when he was 39, shortly after Williams' return from work with Ravel in Paris. While too rarely performed, it is considered one of his masterpieces of secular choral and orchestral music.

This is the sixth season that these critically acclaimed choral and orchestral organizations have collaborated to create great music. Each has received unvarnished praise by the region's arts critics--find out why in this concert of rich beauty and new revelations.

About the Chamber Orchestra of the Triangle:

Since 1982, The Chamber Orchestra of the Triangle has been received with genuine respect and enthusiasm by music critics and the community. Today, it is considered one of the finest professional ensembles in North Carolina and the Southeast. With its elite corps of musicians, the orchestra continues to present a well-chosen and unusual repertoire that delights audiences and evokes high praise from critics. That standard of excellence has become the hallmark of the orchestra and has distinguished each succeeding season. The 2015-2016 series marks its 33rd concert season. For more information, visit www.thecot.org or call 919.360.3382