Burning Coal Boils Romeo & Juliet Down to its Essence

The Familiar Play Takes on New Life in this Important Update 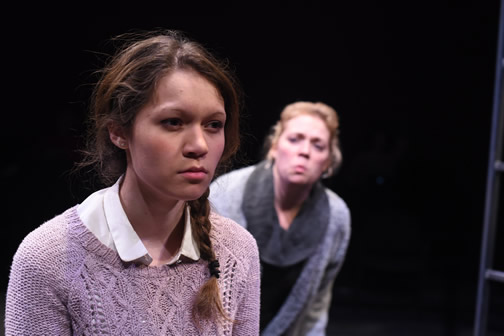 
Juliet and the Nurse:
Emily Rose White and Erin Tito 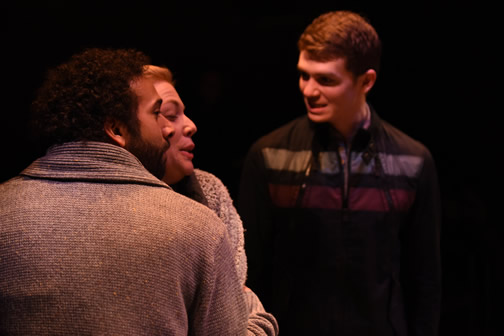 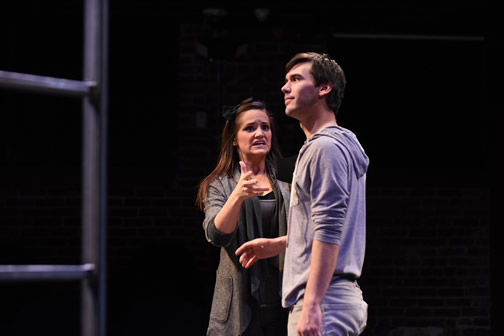 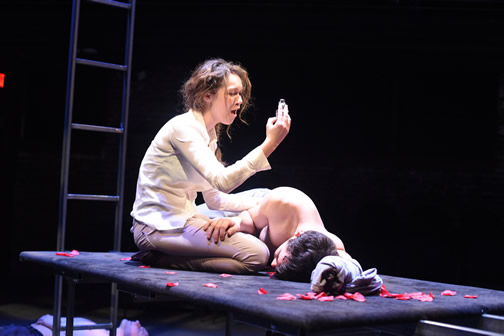 As a part of the new year's Wherefore: Shakespeare in Raleigh project, Burning Coal Theatre Company is presenting Romeo and Juliet at the Murphey School Auditorium through February 15. Directed by Emily Ranii, the program runs a swift (by Shakespearean standards) two-and-a-half hours as the company boils down from five acts to two the very essence of this tragedy of star-crossed lovers, resulting in a swift and surprisingly accessible new version of what Shakespeare intended.

Ranii has chosen a superlative cast to bring about this performance, using a scant thirteen actors to create twenty onstage characters. Upon entry to the theater we were faced with only a pair of ladders reaching into the rafters; the troupe used these simple props to create various levels of staging with acrobatic and dance-like precision. Most pronounced was the balcony scene, wherein Romeo (Joey Heyworth) met his love Juliet (Emily Rose White) for only the second time, having been smitten by her presence at her father's ball earlier that evening.

There is a great deal to be appreciated in this sculpted performance, not the least of which is the stylized use of violence that Ranii creates onstage. The brawl that opens the show, for example, a stylized dance, indicated violence we experienced up close, using a surprising complement of chairs as weapons. These chairs, having created brilliantly the chaos of the feud between the Montagues and the Capulets, remain littered about the stage as The Prince (Gil Faison) views the carnage of yet another disturbance by these two families.

The tension between the families was palpable, created mostly by the wives of the households, who cried out bitterly at the other's offences. Lady Capulet (Benji Jones) was bereft when confronted with the death of Tybalt (Will Sarratt) and cried vengeance upon the boy who killed him. Lady Montague (Olivia Griego) was incensed and screamed that Tybalt had been the aggressor. The two led their respective families to more violence as the feud developed.

The climactic struggle between Tybalt and Romeo, fomented by Tybalt's killing of Romeo's friend Mercutio (Joel Oramas), took place swiftly, without the long building of suspense that exists in the original version. The deeds followed quickly, one upon the other, bringing to mind the murders in West Side Story as Mercutio and Tybalt fell in rapid succession. This brought part one to a close, ending what had been a mostly light-hearted first act with sudden violence rather than the long, brooding violence of the original.

Ranii also brought to the stage the very Renaissance notion that the children of a man are his property, to be disposed of as he wishes. This was especially true of Capulet (Mark Filiaci), a man of quick temper, used to getting his way. After he made what he believed should have been a happy decree to his young daughter, that of impending marriage, he exploded when his young charge refused him outright. (This simply was not done!) Filiaci created a masterful scene in which he confronted his daughter savagely, leaving her truly shaken at his anger.

This cast has created a stripped-down version of Shakespeare's masterpiece, bringing to the stage a swift and action-packed performance that is sure to please. There is much to appeal to the senses, including a superb soundtrack that underscores these scenes superbly, created by sound designer Don Tindall. Ranii and company have created a show that is truly alive and kicking, one that created the time and place of Verona superbly in an action-packed series of events that fell quickly, one upon the other. The show was fleet and over before we knew it, despite its two-and-a-half hour running time. Burning Coal's Romeo and Juliet, a compact and dynamic show, highly accessible, created a remarkable and believable series of events that were, taken together, stunning. This production of Romeo and Juliet is a keeper, worthy of your attention, and a superb opening for this spring's Wherefore: Shakespeare in Raleigh festival.

Romeo & Juliet continues through Feb. 15. For details, see the sidebar.