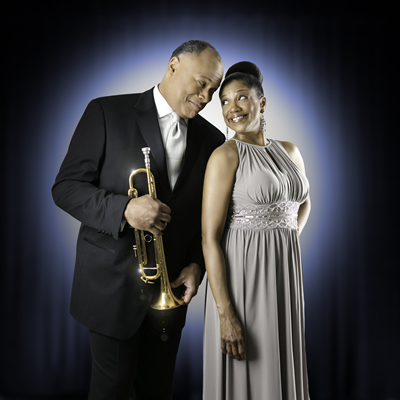 Courtesy the artists and the NC Symphony

Guest artists Byron Stripling and Marva Hicks, supported by conductor David Glover, drummer Robert Breithaupt, and the entire NC Symphony, memorialized jazz legends Louis Armstrong and Ella Fitzgerald by interpreting their timeless works. It was a privilege to witness this fabulous team of musicians fill Meymandi Concert Hall with electrifying melodies and rhythms. Their delightful blend of musicality and theatricality kept the audience members on their toes through well-known songs such as "On the Sunny Side of the Street" or "What a Wonderful World." From the introduction to the encore, "Louis and Ella, All That Jazz" was a memorable tribute to some of jazz's finest.

The orchestra jumped right into the bouncy "Tiger Rag" (LaRocca, arr. Grimes), with Stripling taking no time at all to perform energetic and soaring trumpet phrases within the free texture of the intro. Once a steadier texture began, the brass section imitated Stripling's trumpet melodies playfully. As with many of the songs on the program, conductor David Glover incorporated all sections of the orchestra easily into the jazz sound. The violins, playing legato countermelodies, provided excellent support for more experimental trumpet or vocal lines.

After Stripling's fun rendition of "On the Sunny Side of the Street," Marva Hicks made her entrance singing Ella Fitzgerald's "A Tisket, A Tasket." With this sassy and upbeat song, Hicks was most breathtaking when suddenly departing from the expected melody, instead creating her own soaring melody. Hicks sang "They Can't Take That Away From Me," which perhaps contained the most charming moment yet, when Hicks and Stripling sang as a direct duet, exchanging phrases and then singing the final phrase together in harmony. Through their musicality, it was clear that Hicks and Stripling had wonderful onstage chemistry. The first half of the concert concluded with the infectious rhythms of Duke Ellington's "It Don't Mean a Thing If It Ain't Got That Swing." The descending bass line supported the orchestra and drums, while Stripling and Hicks traded scatting and vocal lines. All of this energy built to a climactic finish.

Byron Stripling began the second half with the catchy and soulful ballad "Basin Street Blues," featuring an impressive piano solo and lots of textures, including pulsing chords from the orchestra. The song concluded with only Stripling on the trumpet, playing expertly shaped phrases that filled the concert hall.

One of the highlights of the concert had to be the ensemble's interpretations of several songs from Gershwin's opera Porgy and Bess. These emotionally charged and theatrical songs proved to be the perfect backdrop to showcase the talents of the soloists and the orchestra. "Summertime," with its mysterious and hazy texture, was a startling contrast to many of the previous songs. Hicks's voice, rich in the lower range and strong yet sparkly in the higher, was a perfect interpreter of the well-known melody. Stripling sang the bold "It Ain't Necessarily So" followed by Hicks singing the mournful aria "My Man's Gone Now." This song began quietly, but Hicks nearly brought the house down with her breathtaking wails on the phrase "since my man is dead," accompanied by crashes from the orchestra.

The concert concluded with "Sweet Georgia Brown," which began humorously as Stripling began to conduct the orchestra. The strong and catchy rhythms and melodies in this song supported Stripling and Hicks singing alongside one another. Although their performance was in a large concert hall, the soloists' chemistry with each other and the audience was akin to a more intimate setting – it was hard to tell the difference between what had been rehearsed and what was just pure interaction and reaction to the energy onstage. For an encore, Stripling came back to lead the audience in singing "Can't Give You Anything But Love," even managing to get different sections of the audience to sing three-part harmony! All of this made for a fantastic and fun concert.

This program will be repeated on the evening of January 17 in the same venue. For details, see the sidebar.