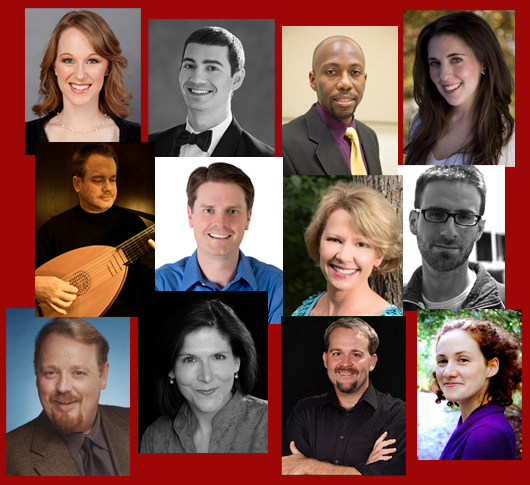 
Voices of a New Renaissance

Voices of a New Renaissance is an ensemble of eleven very fine voices, now in its second year, under the leadership of Nathan Leaf, who is Director of Choral Activities at NCSU and Choir Director at St. Stephen's Episcopal Church in Durham, where this program was performed. The concert, titled "Baroque Bookends," featured music of Claudio Monteverdi (1567-1643) and Johann Sebastian Bach (1685-1750).

Monteverdi, secure in his position at St. Mark's in Venice, experimented as his curiosity led him. He played around with a wide variety of voice-part groupings, pushed dissonance beyond passing tones and cadence preparation to a purposeful use in tone-painting.

By the end of Bach's sojourn in Leipzig, Baroque music had a solid harmonic foundation and a system of well-tempered scales. The beauty of the renaissance melodic interweaving was still there, now over a ground bass and with harmonic structure based on tempered scales as in the masterful cantatas and motets written for St. Thomas Church.

The concert opened with the Kyrie and Gloria from Monteverdi's 1641 Messa a 4 voci da capella. Delicious overlapping phrases in the renaissance style set up a tapestry of exquisite beauty. Christe eleison was especially ethereal, starting with a beautiful melody in the soprano and alto parts. Monteverdi's works from this period in Venice, where he served for 30 years, are replete with experimental combinations of voices, dissonances, and a growing sense of harmonic treatment in tempered scales. The Gloria section of the mass is more homophonic and was sung on this occasion with a staunch display of blended vocal production.

The secular "Lamento della Ninfa" from Monteverdi's 8th book of madrigals, featured performances by Kathryn Mueller, soprano, tenors Aaron Carlyle and Roman Testroet, and baritone Lewis Moore, along with Jennifer Streeter, harpsichord, and Stephanie Vial, baroque cello. In typical madrigal style the lover bemoans the loss of her love in sorrowful and bitter song. The artists' performance was convincing in its soulful sadness and accomplished musicality. Mueller's rich, smooth, and sweet voice was ideal in this setting.

The first half of the concert concluded with Bach's marvelous motet, Jesu, meine Freude, S.227. It is structured in eleven sections, every other one a chorale based on the hymn-tune of the title, with alternating chorus settings of texts from the Chapter 8 of Romans. The five-part motet with basso continuo was performed with Streeter at the organ and Vial playing the baroque cello. This is one of the most daunting Bach works. A few years ago, one critic observed*, "It takes a choir that doesn't suck just to get through these pieces (the six motets). It takes a great choir to do them badly. It takes an even better, even luckier choir than that to convey the wonder and drama of the music."

I have heard Jesu, meine Freude performed many times and have sung it twice. The most satisfying performance that stands out for me was by a group of young singers who grew up in Leipzig and attended St Thomas School. It was surprisingly, hauntingly lyrical. This is what was lacking in the Voices of a New Renaissance performance. The notes were all there, the pitch was solid, the vocal balance was good, and the timing was precise, though a bit mechanical. There were passages that stood out gloriously – for example, the chorale "Gute Nacht, O Wesen" flowed nicely with expressive phrasing. With these fine singers, there was nothing really unpleasing about this performance. A little more rehearsal time and attention to the details of interpretive phrasing would have made it an outstanding performance.

After intermission the chorus returned to the Monteverdi Mass for the Credo, Sanctus, Benedictus, and Agnus Dei. In the Credo section, the composer makes the most of text painting, and the choir delivered it beautifully, especially through the Incarnatus, Crucifixus, and Resurrexit sections. There was marvelous singing here!

The madrigal "Non partir, ritrosetta" (Coy maiden, do not leave me) was sung by Erica Dunkle and Jennifer Seiger, mezzos, and DeMar Neal, baritone. It lists all the miseries of unrequited love and ends with the line "You are leaving me and I must die." Ah, love, thou fowl deceiver! Do you suppose they took this stuff seriously? The singing was delightful and a bit playful.

"Chi voi hover felice" advises those who want to have a happy and joyful heart to avoid cruel love. Soprano Elizabeth Joyner sang solo with the full chorus. One can almost sense a wink in the delightful music and in Joyner's outstanding performance. The secular madrigals were a nice contrast to the sacred selections and provided a broader view of the Baroque musical development.

By the time the Bach motets come on the scene, such things as basso continuo, tempered scales, key structure, and harmonic development were well established. In fact, the flow of musical development had already begun to move into the elements of the classical era. The six motets that are most certainly Bach's contain elements of all that went before and in a large sense sum up the baroque.

The concert concluded with Lobet den Herrn, S.230. It is a setting of Psalm 117, full of exuberant praise and concluding with a sparkling Hallelujah. Despite a couple of ensemble issues, the performance was thrilling. Conductor Leaf did a masterful job in holding things together and providing direction for an exciting performance.

Throughout the concert, Vial playing cello and Streeter playing organ or harpsichord provided solid and reliable basso continuo. Voices of a New Renaissance has the potential to be an outstanding choir in the Triangle. All that is needed, in my book, is a little more time together without major personnel changes and perhaps a bit more rehearsal time to polish interpretive details and jell as a group. Watch for their next performance. They are exciting to hear.