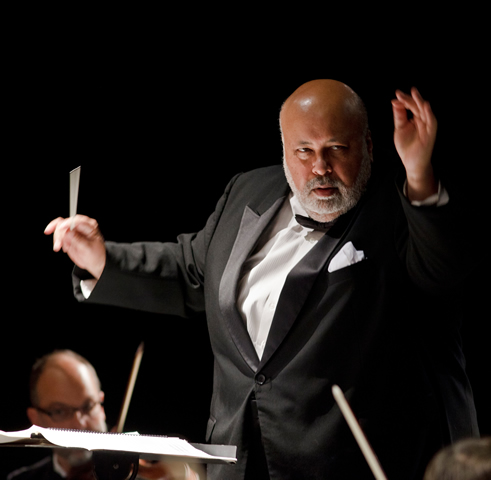 Cary is unquestionably emerging as a town for the romantically inclined. Just a month ago an article in these pages discussed a veritable lovefest occurring in the downtown area. Now Summerfest Artistic Director William Henry Curry and the North Carolina Symphony have brought the cream of romantic Broadway hits to the suburbs. Here were no fewer than twelve all-time favorite songs, with dozens more excerpted for orchestral suites.

Patrons at Koka Booth Amphitheatre should be thankful for that venue's acoustic properties. As soon as the orchestra launched into the overture to Gershwin's Of Thee I Sing, it was evident that here was sound quality rivaling that heard in some concert halls. Good symphonic sound continued later with selections from Cole Porter's Can-Can – many in the audience perforce tunefully murmuring, "C'est magnifique!"

Selections from Lerner and Loewe's My Fair Lady yielded every standby you could remember, e.g., "Get Me to the Church on Time" and "On the Street Where You Live." And who could forget "Loverly"? Symphonic Impressions from Meredith Willson's The Music Man featured a gang of trombones (but maybe not as many as 76). Perhaps the finest orchestration of the evening came in the suite from Wicked by Stephen Schwartz.

Appearing as major romantic adjuncts to this unbelievably salutary evening were three vocal soloists of the first rank. Two of these singers are well and justly established hereabouts and to the further reaches. The third one is at the beginning of her career, a proto-star whose arc will be worthy to watch.

Soprano Elizabeth Grayson has appeared to audiences from all over, and to great acclaim. She opened the vocals with "All the Things You Are" from Jerome Kern's Very Warm for May. She added "A Wonderful Guy" from South Pacific by Richard Rodgers. She was at her noted best and most moving in "Green Finch and Linnet Bird" from Sondheim's Sweeney Todd. As a very real "captive" in a cold and unloving mansion, she appeals to the caged birds to "Teach me how to sing. If I cannot fly, let me sing." Perhaps the crowd favorite by this outstanding singer was the obligatory "I Could Have Danced All Night" from the aforementioned My Fair Lady.

Bringing an exceptional baritone to the proceedings was Scott MacLeod. This High Point University professor's initial offering was the near-canonical "Ol' Man River" from Kern's Showboat. In introductory remarks, he paid tribute to his "model and mentor," William Warfield, a consequential bass-baritone from days of yore, and one who could be said to "own" that song. MacLeod did his mentor proud, with a low register on a par with that of the great man himself. He followed with another staple, "Some Enchanted Evening" from South Pacific. His finest dramatic work came with "Being Alive" from Sondheim's Company, wherein he finds that being a loner is not the way to go. He decides, with Tennyson, that "'Tis better to have loved and lost / Than never to have loved at all."

Kaswanna Kanyinda is a recent vocal performance graduate from the University of North Carolina at Chapel Hill. She performed "Summertime" and "My Man's Gone Now" from Gershwin's Porgy and Bess. Here was a voice and a dramatic presence that the music world will hear of further. The power of her delivery seems the equivalent of some of the greats. Not to go too far toward hyperbole, but think young Birgit Nilsson, beginning Leontyne Price, budding Kirsten Flagstad. She will attend graduate school in the fall at the University of Michigan. Keep a sharp lookout (and ear-out) for this singer.

An extra-musical attraction for the evening was the presence of foodie experts who milled about and judged the manifold picnic spreads for excellence of presentation and taste, ultimately awarding the grand prize. Tragically for one attendee, there was no demand for the services of a considerably gifted and eager amateur taster.

Summerfest continues through July 12. For details, see our calendar.

Edited/corrected 6/9 with thanks to an eagle-eyed reader.