Music is Indeed the Food of Love, and the Concert Singers of Cary Sing On 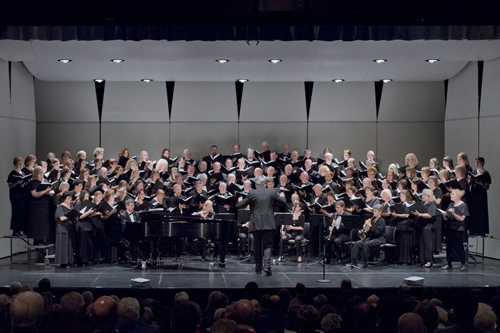 David Dickau's slight adaptation of Shakespeare's text from Twelfth Night served the Concert Singers of Cary well in their season-ending presentation. That composer's "If Music Be the Food of Love" was just one of numerous selections constituting a veritable love-fest at the fine old/new Cary Arts Center. The piece also served as a worthy exemplar of the program's offerings and a vehicle to showcase the commendable handiwork of the singers, with vital support from pianist Allen Bailey.

To open the evening of American Love Songs, director Lawrence Speakman chose Personals by Stephen Paulus, with "texts" taken from personal entries in The Village Voice. A subset of seven fine singers soldiered on through these four whimsical pieces, each of which could be considered an acquired taste. Musical matters took an upward turn as the huge chorus launched into Five Hebrew Love Songs by the esteemed contemporary composer Eric Whitacre.

The singers created a suitably smoky atmosphere with Duke Ellington's great "Mood Indigo," complemented by Bailey's piano and the percussion of Julia Thompson: "You ain't been blue till you've had that mood indigo." Speaking of smoke, the singers and Bailey later collaborated most successfully on Kern's "Smoke Gets in Your Eyes." Cellist Alex Ezerman contributed greatly to Imant Raminsh's "In the Night We Shall Go In."

Billy Joel's "Lullaby" proved to be a real a cappella charmer, as did Joseph Jennings' arrangement of "Calling My Children Home." ("O may they hear my calling… and come back home some day.") Here was a piece as appealing as it was heart-rending. (Jennings was the long time Music Director of the famed Chanticleer ensemble.)

In the enthusiastic audience was local composer Jacob Groff. The group was privileged to present the world premiere performance of his "Autumn & Love Come and Gone," with text from the poetry of Georgia Douglas Johnson. This captivating song conveyed, in the composer's words, a "sense of longing and loss." The piano accompaniment was integral to the work, as vital as any of the choral parts. Here was a new piece that should be considered by choral directors at any time the love theme is foremost. René Clausen, rightly a favorite of many, utilized the Song of Solomon for his wonderful "Set Me as a Seal," a text proclaiming that "… love is as strong as death."

After intermission it was time for the featured work of the evening, Samuel Barber's song cycle, The Lovers. Barber probably reasoned that if the eroticism of Song of Solomon could make it into the Bible, then why not include the eroticism of Pablo Neruda's poetry in the choral literature. These nine songs called for three entities: a leaned-down chorus of about forty-five, a fifteen-member chamber orchestra, and an accomplished baritone. Speakman led these forces in the work's North Carolina premiere.

Three of the songs were given over to the baritone soloist, in this case the highly acclaimed John Kramar, Professor of Music at East Carolina University. This resonant baritone worked diligently on these songs, each one of them lacking any strains that could induce one to leave the hall humming. The choral pieces were of a much more tuneful nature, some bountifully so. "In the Hot Depth of This Summer" featured the women most pleasingly. "We Have Lost Even This Twilight" and the closing "Cemetery of Kisses" are choral numbers of the highest order.

It would be hard to overstate the supplementary contribution of that exceptional orchestra throughout the entire cycle. This chamber version was arranged by Robert Kyr, and the resulting sound was just about as lush and satisfying as any of this composer's finest output. Barber was called upon yet again for a bonus work to end the evening. His exquisite "Easter Chorale" elicited the most elevated quality yet from singers and orchestra.

So whether their tastes ran to the sacred or to the profane, or maybe somewhere in the broad sentimental middle, all lovebirds could find a friendly roosting spot at the Cary Arts Center on this salutary Saturday evening.