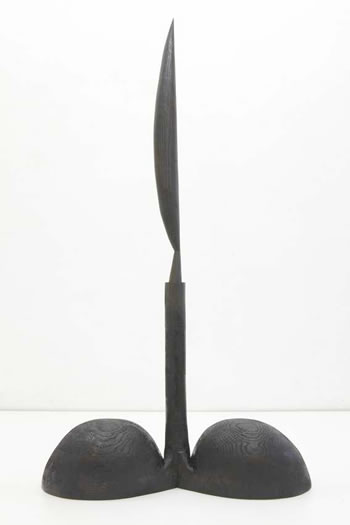 The Southeastern Center for Contemporary Art (SECCA) is Brooklyn-based Eric Fertman's first North Carolina venue, and A Comic Turn is Cora Fisher's first exhibition as the gallery's new curator. The exhibition leaves no doubt that Fertman is keenly aware of the history of 20th-century sculpture, from Dada to H.C. Westermann, and clearly intent on mastering the legacy of the past on his own terms. In a review of an earlier exhibition of the artist's work a critic for the New York Times noted that Fertman's own vision seemed to be obscured by his multiplicity of allusions. Fisher counters this, probing into Fertman's motivations to reveal the unique character of his approach to object-based humor.

The visual arts rarely, if ever, elicit the laugh-out-loud responses evoked by slapstick comedy or stand-up comedians. More sophisticated forms of humor are the purview of painting and sculpture. The late H.C. Westermann, Fertman's mid-century predecessor, was a master of finely crafted objects that pack the punch of caustic satire. For three decades Joyce Scott has unexpectedly combined the exaggeration of caricature and the medium of African beadwork to critique social and racial stereotypes. Fertman subjects his sources to the kind of parody that one scholar has characterized as a post-modern method of making art (Linda Hutcheon, A Theory of Parody, 2011). The humor inherent in post-modern parody lies in the gap between paying homage and keeping an ironic distance. This gap is the space occupied by Fertman's "particular comic gestures," which Fisher identifies as the "most spirited quality" of his art in an illustrated curatorial statement available in digital form on the SECCA website and in paper copy at the reception desk.

Nowhere is Fertman's brand of parody more evident than in his quirky reiterations of Constantin Brancusi's Endless Column, Bird in Space and The Kiss II. In Fertman's Bird in Space, high art is introduced to pop culture in the guise of the artist's signature form, which looks like a Nike athletic shoe reconstructed as a clog for Olive Oyl's debut in claymation. Fertman's version is subtitled Pigeon Toe (2013), which is puzzling since it appears to be more duck-footed. Whether pigeon or duck, Fertman's Bird in Space is of a different species than Brancusi's iconic abstraction. A variation of Brancusi's streamlined shape is perched on a tubular stem anchored by a pair of Fertman's clunky clogs. These shoes were definitely not made for walking, let alone taking flight. Here, as in other works, material, like form, is marshaled to the effect of parodic humor. Instead of Brancusi's highly polished marble or gleaming bronze, Fertman uses old-fashioned carved wood, either oak or ash, often darkened with a dull black stain or enlivened with a coat of neon-colored paint.

The remarkably versatile shoes appear in multiple permutations throughout the exhibition. One attempts in vain to move forward in Inclined Boney, one of five of Fertman's "Boney" series from 2011. All reference the human body in parts linked by carved joints and stances based on gymnastic or yoga postures rather than the sculptural tradition of contrapposto, or weight shift. Their titles (Boney Adonis, Boney Thinker, Boney Loafer) invite viewers to delight in the disconnect between our preconceived ideas based on familiar images and Fertman's gawky, goofy androgynes. Attesting to the breadth of Fertman's cultural capital, two sculptures from 2011, Lady and Sandman, have the commanding presence of ritual African power figures. Other works, such as Vase (2010), Toupee (2012) and Shattered Phone (2014), represent familiar objects, always with an ironic twist.

SECCA's survey of Fertman's output from 2007-14 is installed in the Main Gallery, which is illuminated and partially painted for the occasion to create different stage sets for related works. The sculptures are placed in the gallery with the same attention to spatial relationships that is evident in the calculated placement of Fertman's diminutive sketches on the pages of his sketchbooks, seven of which are displayed at the top of the staircase descending into the Main Gallery. Pedestals in a variety of shapes, sizes and colors, some constructed by the artist, complement the particular formal qualities of each work, even as they poke fun at the elevated status implicit in a museum pedestal. Interspersed throughout the exhibition are videos by two generations of performance artists (Ger van Elk's "The Well Shaven Cactus," 1969; Cynthia Maughan's "Coffin from Toothpicks," 1975; and Kate Gilmore's "Pot, Kettle, Black," 2011). This curatorial choice engages viewers in teasing out the nuances of humor inherent in absurd comic action and invested in intentionally eccentric objects.

In keeping with SECCA's commitment to diverse exhibition programming, Fertman's A Comic Turn is paired with Jennifer Meanley's Far Away, In the Meadow. Meanley's dense, richly colored narratives, rendered in oil and collage, explore a darker side of the imagination than Fertman's witty, playful sculpture. Meanley's works are on display in the Potter Gallery until May 24. Fertman's exhibition opened, appropriately, on April Fools' Day and will be on view until June 30. For related programming, including a Second Saturday family day and a gala inspired by Fertman's suspended "light bulbs," consult the SECCA website.

The Meanley exhibit runs to May 24, and the Fertman show, through 6/1. For details of both, see the sidebar.