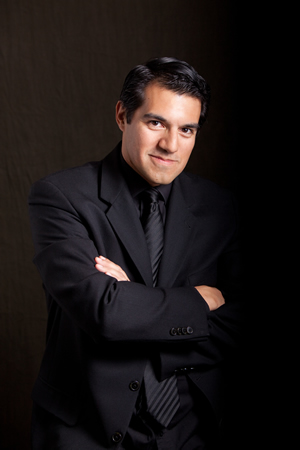 Conducted by the passionate Miguel Harth-Bedoya, the North Carolina Symphony's concert "Pictures at an Exhibition" was both beautiful and powerful. Although Mussorgsky's Pictures at an Exhibition was the last of the pieces performed, the overall title of the same name made complete sense, because the two preceding pieces also depicted vibrant scenes that could be interpreted personally by the listener.

Perú Negro, written by Jimmy López, was practically essential to the program, due to the fact that the conductor Harth-Bedoya and López, both natives of Peru, collaborated very closely for the conception and premiere of this piece. Therefore, it was a delight to watch Harth-Bedoya himself conduct through wild tempo changes and complex Afro-Peruvian rhythms. Perú Negro combines the tunes of six Peruvian folk songs with the African rhythms brought to Peru. The piece begins with solo brass instruments calling out the main motive in short, punctuated phrases. Joined by the strings, an ominously dissonant chord is created, building up the tension until a moment of silence. The piece itself seems to be a series of buildups and releases, and at one fascinating point, each section of the orchestra carries its own motive and independent rhythm. This section of rhythmic dissonance made it all the more powerful when all instruments played consonantly together, united by rolling beats from the drums. With the return of the original motive, the series of Peruvian scenes was brought to a close with breathtaking fanfare.

Scenes of pomp and romantic waltzes were explored next, with Strauss' Suite from Der Rosenkavalier, Op. 59. Throughout each section, the original melodic motive is reiterated with different instrumentation. After the triumphant show at the beginning, this motive reappears, delicately sparkling among the strings. Instead of a singer, alternating woodwind instruments play the tenor aria ("Di rigori armato"), and the closing duet ("Ist ein Traum") is between an oboe and a horn. In between, there are very clear sections of waltz – one light and delicate, and one pompous and dramatic. The tempo shifts between these were navigated effortlessly, and each scene flowed seamlessly together. The suite concluded with a dramatically extended cadence up to the final chord.

Pictures at an Exhibition by Modest Mussorgsky is a spectacular depiction of ten very specific scenes, each one inspired by a work of the composer's friend, artist Victor Hartmann (some of which may be seen here). After Hartmann's untimely death, an exhibition of his work was given in St. Petersburg. Inspired by the artist's life and work, Mussorgsky composed a piano suite which was posthumously orchestrated by Maurice Ravel. Each of the ten tableaus is a vivid representation of a singular work of art, and these musical representations are made all the more valuable, since several of the original artworks have been lost over time.

After the stately and catchy "Promenade," Pictures at an Exhibition dives into the pictures themselves. "Gnomus," a somewhat ridiculous depiction of a gnome with crooked legs, contains energetic bursts of melody in between mysterious descending lines played by the strings. "Tuileries" and "Limoges" paint similar pictures, depicting chattering children and arguing women respectively. A low humming bass supports the image of a huge-wheeled oxcart in "Bydlo," adding more and more instruments as the oxcart rolls ominously closer. One of the most fascinating tableaus, "Catacombae - Cum mortuis in lingua mortua" (With the dead in a dead language) begins by abruptly cutting off the previous scene with a loud dissonant chord. The melody that follows is mysterious and gloomy, with little motion between chord changes. However, "Catacombae" ends harmoniously, giving a positive angle to the otherwise grim scene.

The final picture, "The Great Gate of Kiev," clearly depicts Mussorgsky's sense of nationalism. The original motive from the "Promenade" returns, combined with grand orchestration to illustrate magnificent Russian architecture. The gate's huge grandeur is emphasized by the melody's slowing down to a dramatic half speed leading to the final chord, concluding the night's transportive music.

This program was given the previous night in Chapel Hill and will be repeated March 29 in Raleigh. For details, see the sidebar.