THROUGH 9/30: Bechtler Museum Honors a Close Friend of the Family 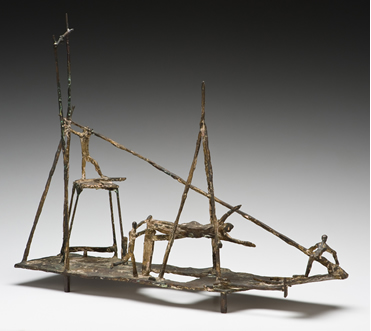 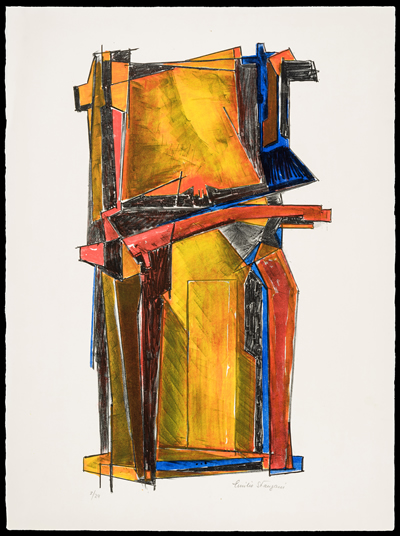 Charlotte's Bechtler Museum of Modern Art's second floor gallery is now playing host to a show of work by Emilio Stanzani (1906-77), a twentieth century Swiss artist and friend of the Bechtlers.

The show, titled Appetite for Risk: Works by Emilio Stanzani, contains personal notes from the artist, original lithographs, and bronze pieces. With only twelve works, the show is small enough to be digestible but not exactly satiating.

Hans Bechtler's persistent relationships with and patronage of European artists is what led to the collection we see today, and for that we are grateful. However, while the Bechtler Museum had an opportunity to introduce audiences to an artist who stood on his own merit, they instead chose to portray him as a friend of the family.

The argument lies in the unusual curatorial choice to display more casual holiday notes from Stanzani to the Bechtlers than independent art pieces, which makes the already small exhibition feel imbalanced and thrown together. It was only a year ago that the museum showed Hans Bechtler's 1964 birthday portfolio, full of personal notes from artists to their friend and patron (Stanzani's contribution is on view here). The cards in this show, with sketches in crayon and short phrases of good cheer, might be interesting to first time visitors, but repeat guests will become bored. Hopefully they will consider the few outstanding works on view.

Stanzani began a career as a craftsman in Switzerland but by the end of World War II had switched to making art full time. He befriended creatives seeking a haven from the war, like bronze artists Marino Marini and Alberto Giacometti, whose influence is apparent. In 1952 he began a lifelong friendship with famous French mime Marcel Marceau, which sparked a fascination with movement of the human form.

The greatest proof of this love is the exceptional 1956 bronze Figuren-Transport, playful because of its subject and size. The composition slopes down from left to right and depicts a spindly, precarious structure littered with acrobats. Among them, not a single limb is touching another or the body from which it sprouts; split legs and stretching arms reach out, their lines mimicked in the structural form that surrounds them. The bronze is smooth but looks handmade, each figure is composed as if the artist cared most about the possibilities of angles its limbs presented.

Across the room is the bronze relief Luwa Jubiläum, commissioned by Hans and Walter Bechtler to celebrate the 25th anniversary of their company, Luwa AG. It hangs on the wall amidst the holiday cards from the artist to the family.

The eye catching 1960s lithograph on paper titled Komposition shows Stanzani following the path the cubists laid before him. He disassembles the facets of his subject and flattens them into jutting, angular shapes of contrasting color. Energetic movement lies in strokes of ink and their intersections. The style is repeated in Stanzani's addition to Hans Bechtler's birthday portfolio: pigment dynamically spews out from all sides of the crayon-rendered dancing harlequin figure.

Little is recorded about Emilio Stanzani, but one thing is certain: movement of the human form was a catalyst for his work. Dancing and playful elements, most likely inspired by his friendship with Marceau, make the work enjoyable to look at. There are only a few pieces in the show that capture this feeling, and if a visitor can look past the correspondence cards and witness Stanzani's true talent, they will leave feeling enriched.

The show is on view until September 30. For details, see the sidebar.