At CAM Raleigh: A Tornado Rises; &, in the "Storm Cellar," an Emotional Potpourri Emerges 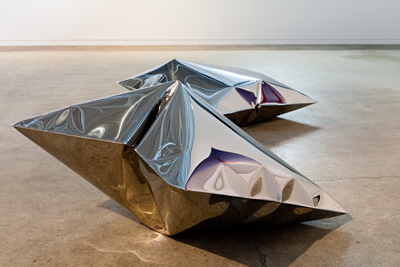 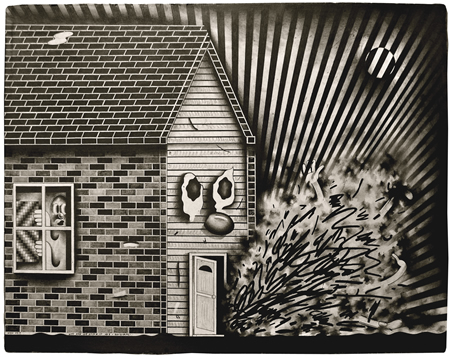 Courtesy of the artist, Wetern Exhibitions, and CAM Raleigh

A tornado rises these days in the belly of the Contemporary Art Museum. Admittedly it is small and artificially created by the British artist Alistair McClymont as part of his show "Everything We Are Capable of Seeing." But it is a tornado nevertheless, one whose turns and loops can be traced by bits of paint McClymont places at the foot of the twister. The results line several walls at the museum.

McClymont labels the work "The Limitations of Logic and the Absence of Absolute Certainty." Like every tornado, this one, created by a series of fans and vacuum hoses pouring out water vapor, almost but never quite moves the same way.

On the main floor, two burnished steel "pillows," forming odd angles as they were blown up, reflect, twist and distort in any number of ways the steel supports and strut's of the gallery ceiling. The results are accidental but genuinely exciting.

On the other hand, McClymont uses a precise number system, the Fibonacci sequence, to create several pieces. One is "Prime Bench," composed of 100 boards lashed together. A board sticks out to mark every Fibonacci number — created in a sequence by adding the two previous numbers together. Though it seems artificial, the sequence is to be found in nature.

The work that obviously draws most attention, at least when a staff member proffers a hypodermic with a single drop of water, is "A Raindrop." A vertical structure containing a series of wind tunnels blows a thin stream of air that can hold the tiny drop for some minutes, balanced by the slight weight of the drop and the upward thrust of the air column. You may stare at it until April 28.

With Ryan Travis Christian's intriguing "Well, Here We Aren't Again," CAM's basement gallery illustrates the enormous value of its emerging artist series. Both comic and menacing, Disney-like and explosive, his black and white work creates the most mixed of emotions. To choose one of a number of large and small floor and wall pieces, "Noisy Neighbor" presents a shack alive with two fried eggs as eyes and an olive as a nose, staring with some puzzlement at a series of pencil slashes hiding or destroying a frightened man. Meaning? You name it. You have until June 17.

For details of both shows, see the sidebar.