Stupendous Dancing by Vertigo at ADF 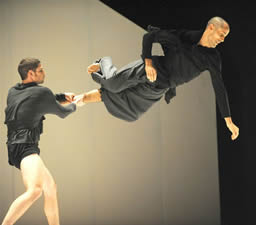 This is going to be a short review. It can be summed up succinctly: Vertigo Dance Company lets loose the most dynamic dancing of the American Dance Festival season thus far. Vertigo performs company founder Noa Wertheim’s Mana again July 14 in the Durham Performing Arts Center. If you like to see relationships defined, gravity defied, emotions unleashed and epistemology grappled simultaneously in a ceaseless turning whirl of bodies, then this is for you.

The American Dance Festival frequently brings Israeli companies and choreographers. We’ve seen a range, from the icy Emmanuel Gat, to the fiery Ohad Naharin. The 20-year-old Vertigo Dance Company works a territory between those extremes, drawing qualities from both into their boundary-land. Mana specifically explores the way in which polarities relate, the one existing for or because of the other. Paradoxically, opposites do have points or planes or zones of contact, a place of mixing, rapprochement, like twilight between darkness and day. In Mana, the lighting lets us know that’s where we are, by means of its overall dimness, crossed by bands of brightness beyond which lies a weighty dark behind the simple house-shaped flat with its broad door that comprises the entire set.

The costumes emphasize aspects of the different worlds. Most of the dancers wear peasant-like clothes augmented with full gathers and loose layers, in the dulled shades of dusk. These garments cover most of the body (drawing our eyes to the beautiful, expressive feet) and make sculptural forms, but their primary purpose is kinetic. Since the dancers are in motion almost continuously, so is the cloth, its loose bits flipping and fluttering like swifts, like bats, around the whirling bodies. However, one dancer comes from the dark side of the house in sleek black clothing, her bare legs fully exposed. We see a sign before we see her: a large helium balloon rises like a moon over the house, its shiny surface reflecting glints from the stage lights. Slowly, it comes around — it is attached by cords to the shoulders of this erotic apparition who moves like a marionette, her heels elevated. In her body we can see clearly all the gorgeous movement only partially revealed by the heavier costuming. Athletic, acrobatic, balletic and almost unbelievably buoyant, the refined dancing never hides its primal source in the human core. If I could put a picture here, it would show the company rising from the floor in backbends, leading with their navels.

Before coming to Durham, Vertigo performed Mana earlier this month at Jacob’s Pillow Dance Festival. Look here for some nicely-edited video from that recent performance. It is all cut to the same piece of music; although the performance itself uses a number of different musical pieces, the pace and rhythmic qualities are much the same as the sample. Note the turning leaps and the silent landings. The ADF preview also includes some footage, and here you can see some images from the company’s Eco-Art Village, between Tel Aviv and Jerusalem, where they make a small world knitted whole, like Mana.