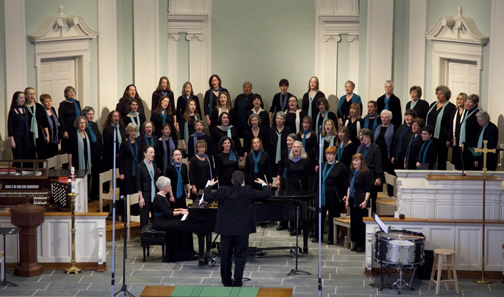 Is it divine intervention, black magic, or a bit of each? With Women's Voices Chorus, well, it's sometimes hard to tell. That the group is unique in our midst is undeniable – it's the region's only choral ensemble of adult women. That the programming tends to be unique, too, is demonstrably true, on multiple levels: they do lots of music by women composers, many of whom are contemporary or near-contemporary. That means they are serving up modern music to audiences that, elsewhere, in different circumstances, might well revolt against so much new stuff within the confines of a single afternoon. Pretty remarkable, eh – and before we even get to the quality of the singing!

For its final concert of the current season, WVC offered a mostly a cappella matinee program in Duke Chapel called "Saints and Sinners," consisting of aspects of femininity both sacred and decidedly secular. If cleanliness (of singing) is next to Godliness, then the first half reflected purity at its most exalted. Short works by Sister Theophane Hytrek (1912-92), Katherine Dines (b.1970), and Damijan Močnik (b.1967) got things off to a compelling start with exceptional sonority and tonal blend. The Queen of Heaven got her due in Dienes' "Regina coeli," and a glorious version of the Beatitudes in Slovene (Slovenian) brought this opening group to a close with sounds reminiscent of the famous Bulgarian Women's Choir that enjoyed such popularity several years ago.

Three parts of Patricia Van Ness' The Nine Orders of Angels featured the Chamber Choir. The pieces performed addressed guardian angels, angels of power, and seraphim, the highest angels. The radiance of the singing reflected the engaging texts, making one wish for a complete performance at some point in the not-too-distant future.

The music of Lana Walter (b.1948) has figured prominently in WVC programs; her Magnificat returned for its third performance by the group. This is powerful and deeply moving fare, here graced by fine solos from Lisa Park and Mary Hoover. All the best qualities of superior choral singing were on display here, too: precise attacks and releases, nearly flawless blending, exceptional diction, and rock-solid intonation.

The cap for the first part was Giovanni Gabrieli's "Jubilate Deo," accompanied by a pair of sackbuts (early trombones), played by Michael Kris and Dalton Harris. There were too few horns or too many women - take your pick - so the brasses were pretty much masked by the chorus, but the work produced a nice effect.

After the intermission, the "Sinners" part began with a pair of superb new works. The first, "Dancing," by Scott A. Tucker (b.1957), uses an old text to contrast Adam with Mary, with Adam coming up predictably short. "Daemon irrepit callidus," by György Orbán (b.1947), contrasts Satan with The Savior with ultimately clear results – but the music gives one pause throughout!

The "Witches' Chorus" from Verdi's Macbeth and the "Habanera" from Bizet's Carmen provided two more glimpses of for-real sinners. Some might argue that a mezzo is preferable for the cigarette girl but soprano Lindsey Hayek delivered the famous song with aplomb, beautifully accompanied by her sisters from the choir. Then Rachel FitzSimons was featured in the UNC Loreleis' version of Gershwin's "The Lorelei" (from Pardon My English). (Having seen that rock in the Rhine River, I can attest to the fact that it would take a heck of a dame to drive a sailor to destruction there, but it's a nice little fairytale….)

The program raced to a rousing conclusion with a brilliant and extended version of "Ain't no Grave Can Hold my Body Down" by Claude Ely (1922-78) as arranged by Paul Caldwell and Sean Ivory. This brought the audience to its collective feet with hearty applause and a few cheers, eliciting at the end another famous old song of sin and suffering, "Oh Sinner Man! Where You Gonna Run To?" After all that, perhaps we were actually standin' in the need of still more prayer!

WVC continues to blaze new musical trails under the leadership of Allan Friedman, a conductor whose precision and enthusiasm mirrors – or perhaps helps inspire – that of his singers. (He gives clear cues and manages the tempi and entrances well. His singers should simply follow, rather than beating time so very much on their own, with their music folders, swaying, and such.)

Along the way this time, Friedman was assisted by two directors from the ranks – Rachel FitzSimons and Laura Delauney – and by percussionist Jennie Vaughn and long-time piano accompanist (and alto) Deborah Coclanis.

If you haven't heard this group, you'd better – or the devil might get you.