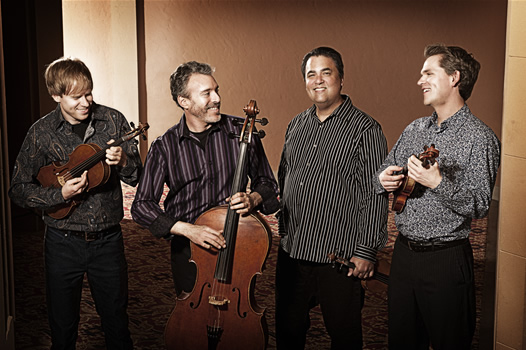 On the cutting edge of contemporary music since 1985, Turtle Island Quartet members David Balakrishnan (violin, baritone violin) and Mark Summers (cello) have been making music together, breaking new ground as they make their way. The young Danish violist Mads Tolling and American fiddle champion Jeremy Kittel bring fresh vitality along with their musical talents. Add the celebrity of two Grammy Awards and you have the makings of an exciting launch into the twenty-first century. The concert program at NC State University's Stewart Theatre, co-sponsored by the Raleigh Chamber Music Guild and NCSU Center Stage, celebrated the work of John Coltrane.

A native of Hamlet, North Carolina, John Coltrane (1926-67) received much of his training in Philadelphia, where he grew up. But his most significant jazz milestones were met in New York City where he performed with jazz greats Dizzy Gillespie, Miles Davis and Thelonius Monk. Davis gave the young tenor saxophonist room to explore and grow, and Monk offered him musical guidance that gave him wings. Likewise, Coltrane's music has influenced many young musicians — the beat goes on (or not). Turtle Island Quartet (TIQ) draws inspiration from jazz legends like Coltrane and from the world of contemporary music, weaving them together into the classical quartet format. With this eclectic mix of styles and influences, Turtle Island has attracted a wide audience.

The first half of the concert was a colorful set that ranged from Latin Jazz master Paquito D'Rivera's "Wapango" to TIQ's versions of Coltrane's arrangement of Rogers' "My Favorite Things" and Jimi Hendrix's version of Bob Dylan's "All Along the Watchtower." The works on the second half are recorded on their CD A Love Supreme. Together, we heard the musical context in which Coltrane's suite of that name can be situated. And all the works performed bore the stamp of this marvelous quartet.

The first movement or section of A Love Supreme, "Acknowledgement," is through-composed. Instead of using the original modal underpinnings, TIQ first violinist Balakrishnan created his own orchestration out of the implied Western harmonization of Coltrane's original. To help the audience navigate, Balakrishnan sang the central melodic motif, the glue that keeps it all together. Even this prompt was only partly successful in keeping us in check. But there were moments of clarity along with flashes of understanding — even serendipity. (And astute listeners will have noticed fleeting passages from Shostakovich's Quartet No. 12). The perpetual motion reminded me of Reich's Different Trains and the northern migration from the South that began during the 20s.

Coltrane's motif is transformed, inverted, elongated, and passed around, yielding individual solos, walking bass, and a viola cadenza — all within a simple blues form. "Resolution," the second movement, clearly signified that this is American jazz. "Pursuance" was pumped up as Turtle Island felt the groove. And the final section, "Psalm," is Coltrane's prayer set to music. The quartet's gospel sound was rich and evocative, like Mahalia Jackson singing "Motherless Child." And breaking from Coltrane's blueprint, Balakrishnan returns to the original theme, a compositional choice that seemed just right.

Remaining in the spotlight, Mark Summer, the TIQ's "cellist, bass and drum player," transported the audience with his "Julie-O," a virtuoso solo. Summer's perfectly choreographed piece is rhythmically and melodically sensuous — it took my breath away.

The quartet returned to the stage for Mads Tolling's arrangement of Stanley Clarke's moving farewell, "Song to John." Tolling's treatment brings out beautiful tonal qualities of the strings and, though I like the recorded version, it's even better live.