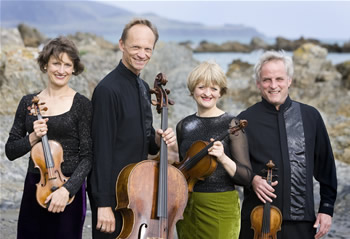 As soon as they stride onto the stage and launch into their first work, you realize that here is no slice-of-life chamber group. Standing as they play are violinists Helene Pohl and Douglas Beilman and violist Gillian Ansell, alongside cellist Rolf Gjelsten who is seated on a small, ad-hoc stage. Thus are all members of the New Zealand String Quartet at the same height throughout the program.

The ensemble's latest concert in the Triangle, offered on the Raleigh Chamber Music Guild's Masters Series, was presented in Fletcher Opera Theater.

The players established their impressive musical bona fides early with the opening String Quartet in D, Op. 64/5 of Haydn. Generally referred to as "The Lark" quartet, this piece received a precise and warmhearted reading. Assigning a fair amount of work to the three lower instruments, it seemed more "balanced" than most of this composer's chamber works. And it could scarcely have provided a greater contrast to the piece that was to follow.

In 2009 the Wellington-based composer Michael Norris created Exitus for String Quartet, on a commission from the New Zealand String Quartet. In so doing, it's quite probable that he conjectured as to what one might hear from four Martian chamber musicians, and how many uncommon (unnatural?) sounds might be elicited from the instruments. Names of the four movements furnish a dependable preview of the work. I. Quidlivun is the Land of the Moon where virtuous spirits find eternal rest. II. Xibalbá is the place of fear in the Mayan underworld where unfortunate souls face tribulations best left undescribed. III. Niflheim is the far northern Norse house of mists, situated at the lowest level of the universe. Here was the "slow" movement, the most recognizably musical of the four. The violins and viola play softly while, perversely enough, the cello enters and plays above the three, higher and higher all the way to inaudibility. The program notes described the cello contribution as tracing "thin, delicate keenings." IV. Oka Lusa Hacha is the Choctaw tribe's Black Water River, into whose roiling waters the soul of the sinner will fall. (Most information from composer's notes.)

This experimental piece was unquestionably the one generating the highest interest level of the afternoon. Anecdotal evidence suggests that musicologists and professional musicians found much to admire in its harmonies and otherworldly sensations. The audience seemed captivated. Perhaps they were all moved by the "penumbras and emanations" (Justice William O. Douglas) of tone and harmony. Will these players face a great deal of competition for the piece from other quartets? Though its manifold qualities do startle and amaze, only time can reveal whether it will play in Peoria.

They closed out the first half with an affectionate treatment of Quartet No. 7 in F-sharp minor, Op. 108, the shortest of Shostakovich's monumental cycle. The program notes quoted a critic as asserting that these "15 string quartets are a private account of the torments of [Soviet Russia's] greatest composer." While many might quarrel with part of that statement, there can be no challenge to the power and desperation exhibited throughout those works.

The String Quartet in C-sharp minor. Op. 131, of Beethoven constituted the second half of the program. The players' love of this work from the Late Quartets would have been evident even without Gjelsten's fine explanatory remarks. He reminded the audience that here was the composer's own favorite, its seven movements also helping to set it apart from all the others. Each player's affection and meticulous respect was evident as they serially waded into the opening fugue, reaching a zenith of sorts by the time they progressed from tempestuous Presto into the tranquil Adagio near the conclusion of the thirty-five minute piece.

Hailing from half way around the planet, these musicians have once more displayed their versatility and artistic excellence to the Triangle community. May they see fit to come this way again.

The RCMG's next concert is November 20, at the NC Museum of Art. Click here for details.

Editor's Note: Triangle readers may know that the NZSQ's second violinist is the brother of NC Symphony cellist Liz Beilman. And for an article on the quartet, click here.