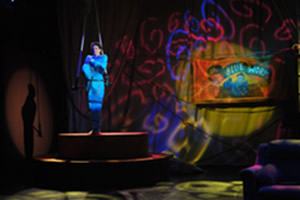 Burning Coal Theatre's artistic director Jerome Davis is interested in new plays, even to the extent of producing brand-new, untested works by local playwrights. Currently running in the company's theater in The Murphey School is the premiere of Raleigh writer Kelly Doyle's Blue. This ambitious play is billed as a comedy, but it is not quite funny enough for that sobriquet.

Neither philosophy nor religion, nor law can eliminate human folly, which might be described as the uncontrolled desire to grab what we want, even when we know it will hurt ourselves and others to do so. Folly's redemption is to provide a bottomless well of material for art, and it is especially generous to the theatre, where we can enjoy the absurd mix of folly and passion from a safe empathetic distance. Blue would draw for laughs on the absurd follies of humans in pursuit of love and sex, but the play fails to recognize that the mainspring for that sort of humor is the pain behind it. A sex comedy without the passion is just a sit-com.

Doyle's work is far more than a sit-com. It includes some fine writing, probing and playful, on numerous points and questions, going beyond cleverness in the way it grapples with conflicting human desires. But it is almost completely affectless. The three characters tell us who they are and how they feel, but they do not appear to actually be feeling much of anything; consequently, neither do we. Feeling nothing of horror about the transgressions of adultery and its collateral damage to trust and honor, feeling nothing of cutting amusement for the ridiculous situations that ensue, left me feeling that the playwright is not yet risking all to stake out her moral position in her art. The play rolls itself like an armadillo. It makes an interesting shape with a glossy surface, but you can't find its heart.

Blue's storyline involves a young couple that hasn't quite grown up and whose members are now growing at different rates in different directions. They've been together since 4thgrade some 20 years ago, and have been married for a number of years. Louise (Kerrie Seymour) is bored and dissatisfied. Her life-force is struggling to break loose from her circumscribing chrysalis of order and responsibility. Adagio (John Jimerson), her adoring husband, is boundlessly creative, irresponsible, apparently ADD, and doesn't initially appear to have a backbone, much less a chrysalis. He can't keep a job or remember to pay the light bill, and spends his days making comic books about Louise going to work. One can understand why Louise would be lured by a travelling circus' specious promises of adventure and freedom.

Louise is drawn to William (John Allore), the circus' acrobatic contortionist escape artist, known as the Blue Worm. Here's a guy who really doesn't have a backbone. He can wiggle and stretch and sort of pour himself from one position to another without any visible skeletal involvement (Allore is very good in the role). He is a self-described scumbag. Sex, nasty thoughtless loveless sex, fills his time and blue condoms litter the floor of his circus-train room. But Louise falls for him, has her sexual adventure - and runs home to tell Adagio that she's in love with a blue worm.

Now this scenario would seem full of potential for absurd comedy. But the shadow of pathos against which it should shine is missing. There is no pathos, only pathetic petulant characters as flat as comic book caricatures.

In his program note for this show, Burning Coal's Jerome Davis lauds a London theater whose slogan is "The Right to Fail." In Raleigh, Burning Coal is a place where serious theater artists have a right to fail on their journeys through the obscuring high brush of artistic choice, and that is a very good thing. Blue is not a particularly successful play, but that is OK. I suspect Doyle is capable of a much better one. Behind every great artwork is a history of lesser works, even failures, out of which something better has been wrenched, much as comic absurdities are mined from sordid folly.