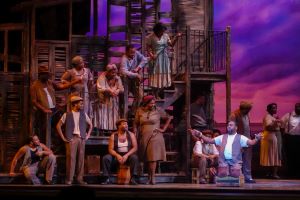 Curiously enough, Opera Carolina didn't get around to producing the Gershwin Brothers' Porgy and Bess – an opera incomparably suffused with the sounds, scents, and DNA of the Carolinas – until its 33rd season in 1980. Turns out that was somewhat bolder than Spoleto Festival USA, which waited until its 40th anniversary in 2016 to bring this opera to Charleston, where the story is set, and where its creator/librettist DuBose Heyward was born. It can be argued that the snooty world of opera recordings was even more hesitant to acknowledge this American classic, issuing the first full-length CD edition in 1976, a full 41 years after the Boston and Broadway premieres.

Hesitancy has lingered a little at Opera Carolina, which brought back new homegrown productions of Porgy and Bess to Belk Theater in 1995 and 2003, but no others until now. OpCarolina did bring us a touring version in 2010, commemorating the 75th anniversary of the Broadway premiere, but that fiasco is best forgotten. A couple more touring versions have come our way over the past quarter century. The best of these was at the Belk in 2014, the touring version of the slimmed-down 2012 Broadway revival that had starred Audra McDonald and Norm Lewis (who just happened to be performing in the touring version of A Soldier's Play as it finished up its two-week Charlotte run down the block at Knight Theater).

In comparison to that estimable touring treat, the new Opera Carolina production conducted by artistic director James Meena did not need to blush. At the Sunday matinee premiere, Sequina DuBose reprised her role of Clara from the Broadway tour while Nicole Cabell, featured as Clara – who sings the incandescent "Summertime" – on Decca's landmark 2006 recording of the original 1935 Broadway score, made her Charlotte debut as Bess. Kenneth Overton, who was billed as the star of that infamous 75th-anniversary tour and was replaced by a fifth-string singer at Ovens Auditorium whose name could not be determined until five days later, finally got his chance to impress as Porgy. No less prestigious, Victor Ryan Robertson gave us a taste of what made the ornate Spoleto production so splendid by reprising his slickster grace as Sportin' Life.

Stage director Dennis Robinson hasn't sought to replicate that scenic Spoleto splendor, concentrating his attention instead on building the drama. Two rolling set pieces by scenic designer John Farrell replicate the dilapidated Catfish Row tenements, with backdrops and Michael Baumgarten's wonderful lighting supplying much of the color. Those colors are usually upstaged by Ildikó Debreczeni's artful costume designs, motley women's and working men's clothing in the outdoor community scenes, veering toward black in the dimly lit funeral scene for the murdered Robbins, and suddenly switching to a splash of white linens for the Kittiwah Island picnic. Even the stylish Sportin' Life, all purple with gold accents when we first see him, wears pure white pants and vest at the beach, though a lurid silk fuchsia shirt peeps through. Other costumes sketch the main characters' evolution. Crown, Robbins' murderer and Bess's abusive former husband, is nearly as dandified as Sportin' Life when we first see them shooting craps, yet he's nearly in tatters when he madly emerges from hiding, seeking Bess. Debreczeni's Bess transforms only slightly less dramatically, her first appearance in a flaming red dress when she still belongs to Crown, followed by a citified black "mourning" dress at the funeral – pointedly accessorized with pearls.

The funeral and picnic scenes both show off how dignity has triumphed over poverty along Catfish Row, though the seafaring men and a climactic hurricane remind us how tenuous their victory is. As Jake, Clara's husband, reminds us as the lead voice in the men's worksong, "It Take a Long Pull to Get There," evoking the Promised Land in much the same way that Rev. Martin Luther King would at the Lincoln Memorial decades later. Laudably, Robinson isn't ashamed of either Porgy or Bess. He permits Cabell's Bess to be Bess, ambivalent toward Porgy, Crown, and Sportin' Life, just as she was written – bold yet insecure. She yields resignedly to Crown after arguing and resisting, so she is absolutely credible when she confesses the full range of her fears in her famed "I Loves You, Porgy" of the imminent confrontation when Crown comes for her: "he hypnotize me when he take hold of me with his hot hand."

Refusing to enlighten Bess or belittle her demons, Robinson collaborates with Overton to rehabilitate Porgy, making him happier and less pathetic than I've ever seen him before. Robinson doesn't ignore Porgy's mobility issues, but unlike other directors, he offers Overton multiple avenues for motion, dispelling the cripple's usual monotony and impotence. In most productions, Porgy perpetually limps with a crutch or glides along on a cart. Occasionally, you might see that four-wheel vehicle at the rear of a goat cart, honoring Samuel Smalls, alias "Goat Cart Sam," the real-life Charlestonian that Heyward based his protagonist upon in his celebrated 1920 novel. Discarding that goat, Overton will limp, glide, crawl, and – at one key dramatic moment – even attempt to stand up and walk. This variety made Overton's Porgy more restless, powerful, and dynamic. His crutch is a forked affair, topped by little ironing board-like cushion joining the branches, enabling Porgy to lean on it with his arm and stand upright. The cart is also cushioned to comfortably accommodate Porgy's kneepads. We see that Overton can glide a good distance along the stage with a single paddling motion, braking with his toes, but I really didn't notice that his wheels could swivel until the last possible moment. That revelation made Porgy's final exit the most stunning I've ever seen.

When Overton first entered, the neighborhood greeted him with affection rather than pity. Even before he got his gal and somewhat domesticated her, he brimmed with sufficient confidence and joie-de-vivre to heartily sing "I Got Plenty o' Nuttin'" to every woman along Catfish Row who had doubted him. You could believe in Overton as he jumped into the transcendent "I Loves You, Porgy" duet: he will stand up to Crown – and unlike the original libretto prescribed, this Porgy met Crown face-to-face rather than sneaking up on him.

Until Porgy's surprisingly military departure, Robertson's slithery balletic grace as Sportin' Life provided the most delicious movement we saw. Executing Michael Jackson-styled spins, Robertson was the "happy dust" he peddled, the wicked exhilaration of the high life that Bess was giving up. Citified and flamboyant, Robertson also rocked Sportin' Life's cynicism smack in the middle of the idyllic Kittiwah picnic. His "It Ain't Necessarily So" became a showstopper that launched Act 2 buoyantly, no less successful than DuBose's spotlit "Summertime" when the curtain first rose. Nor did the quality wane after the drunken brawl at the dice game and Robbins' murder when we adjourned to the gloomy funereal aftermath. Not only did we get to see Porgy duded up, upright on his feet, and escorted by a newly demure and penitent Bess, we were reminded by Michelle Johnson as Serena, Robbins' grieving widow, of the heartfelt power pent up in "My Man's Gone Now," Serena's swaying lament.

As the murderous Crown, Donovan Singletary had ample pecs and biceps for Bess to ogle at in his OpCarolina debut, manhandling her on Kittiwah Island with the confidence – and restraint – of a brute who has willed "his" woman back to his arms for the last five years anytime he wished. The "Oh, What You Want wid Bess" duet had exactly the right blend of chemistry, antagonism, lust, and loathing. More of Singletary's heat surfaced as Catfish Row rode out the hurricane, but his raunchy "A Red-Headed Woman" was too abbreviated, defanged, and on-the-fly for my liking. Give us a longer version, please!

Otherwise, the only persistent flaw in this beautifully sung, meticulously crafted production was the singers when they weren't singing their arias. Nobody else came close to matching Overton's intelligibility or audibility when dialogue or recitative pushed the story forward, an unwanted reminder of the touring production that played Ovens Auditorium in 1998. The dropout in decibels was especially dreary for me in the opening scene as the crap game dragged on, but my discomfort may be benign compared to what Porgy newcomers experienced if they didn't already know the lyrics to the songs. Once the brawl broke out, Heyward's story pretty much told itself for me through the actions we watched, aided by George Gershwin's music and orchestrations. Miking the dialogue, as most touring Broadway shows do, would certainly have been helpful, but the simplest solution for these nagging woes at the Belk would have been supertitles. That way, we could have appreciated Heyward and lyricist Ira Gershwin nearly as much as George.