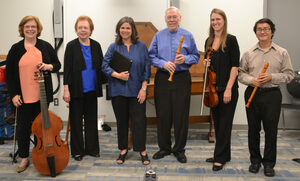 Georg Phillip Telemann (1681) and Johann Sebastian Bach (1685) were born in about 100 miles from each other as the crow flies. Their early lives involved music and composing but their lives did not cross until around 1708 or 1709 when both in the general area of Eisenach. Bach was appointed chamber musician and organist to Duke Wilhelm Ernst and Ernst August of Saxe-Weimar. Telemann entered the service of Duke Johann Wilhelm of Saxe-Eisenach as a composer of instrumental music. We don’t know much about their connections at this time but a manuscript, dating from c.1709, of Telemann's Concerto in G Major for Two Violins, survives in J.S. Bach's hand, and Bach also arranged Telemann's G minor Violin Concerto for Keyboard in about 1713.

In 1714 Telemann, by this time in Frankfurt, stood godfather to Carl Philipp Emanuel Bach at his baptism (hence the second name, Philipp).  In 1721 Telemann would become the music director for the town of Hamburg and its famous school, the Johanneum. He kept this job for life to be succeeded by his godson C.P.E. Bach in 1767.

Meanwhile, J.S. Bach was made Kantor in Leipzig in 1723 only after Telemann, by then director of music in Hamburg, and Christoph Graupner, turned the post down. In 1729 J.S. Bach took over the directorship of the Leipzig collegium musicum founded by Telemann while a student at the university in 1702.

J.S. Bach's interest in, and respect for, Telemann's music is described by C.P.E. Bach in a letter to J.N. Forkel: "In his last years he esteemed highly: Johann Joseph Fux, A. Caldara, George Frideric Handel, Reinhard Keiser, both Grauns, Telemann,  Zelenka , Franz Benda, and in general everything that was worthy of esteem in Berlin and Dresden. Except for the first four, he knew the rest personally. In his young years he was often with Telemann, who also held me at my baptism." J.S. Bach performed various cantatas by Telemann in Leipzig (some of which were mistakenly as his own). J.S. Bach's name appears among the subscribers to Telemann's Paris Quartets (1738), and works by Telemann survive in several keyboard manuscripts from the J.S. Bach circle.

Telemann was probably the first German composer to apply ritornello form (partial repetition of expository themes among contrasting ones) to the sonata and the concerted French ouverture, genres taken up by J.S. Bach, and was the first to set Erdmann Neumeister's cantata texts, which served as a model for J.S. Bach's cantata librettists (Bach Archiv Leipzig website; and Bach Cantatas website).

The instrumental works on this concert called concertos represent Telemann’s forward-looking styles combining recorder, oboe, violin with continuo. Each instrument has obvious solos in these works. A Telemann trio features treble viol and recorder. Most vocal works are sacred and come from Bach’s time about 1715 although several were reworked for use in Leipzig. The concert ends with a happy aria for soprano voice and 3 flutes (the only work of its kind by Bach). The choir of gentle flutes pleases the heart, delights the ear.

This concert will be offered Oct 21, 2022 at 7:30 pm at St. Mark’s Lutheran Church in Charlotte: https://www.carolinapromusica.org.

The program repeats on Oct 24, 2022 at 8:00pm as a part of Belmont Abbey's Arts at the Abbey series in Belmont: https://belmontabbeycollege.edu/campus-life/arts-at-the-abbey/