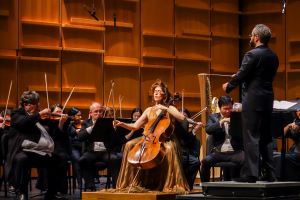 Charlotte Symphony's conductor laureate, Christopher Warren-Green, had been gone nearly a full week, but the echo of his presence remained at the kickoff of the 2022-23 season at Knight Theater. Once again, the orchestra fired off "The Star-Spangled Banner" to inaugurate the new season, and once again, the ensemble achieved lift-off with Edward Elgar's Cello Concerto – just like they did in 2012 at Belk Theater in Warren-Green's first concert as musical director. Now Andrew Grams wielded the baton, his first guest shot with CSO since 2016, and the soloist making her Charlotte debut was Israeli cellist Inbal Segev rather than Alisa Weilerstein. Both artists have recorded the Elgar, Bloch's Kol Nidre, and the complete Bach Cello Suites, so they may be described as kindred spirits. Perhaps Segev gets the nod over Weilerstein in being more simpatico with Grams, who began his program with PIVOT by British composer Anna Clyne. Not only did Segev commission a new Clyne concerto, DANCE, but she also premiered it on the same 2020 album where she plays the Elgar. Grams returned after intermission with Richard Strauss's rarely heard Aus Italien, arguably a more outlaw piece than the composer's Don Juan.

Always forthcoming and charming when he addresses an audience, Grams likened the transitions of PIVOT to pressing the "previous channel" button on a TV remote control. True enough, shifts back and forth from the slow to the fast sections of the piece were often abrupt, incongruous jumps, sometimes startlingly so. But compared to the premiere performance, recorded at the Edinburgh International Festival in 2021, Grams seemed a bit heavy-handed in making his point. Instead of reveling in the contrasts, I found myself longing for the return of the calmer, quieter interludes – a sad waltz, a lazy Irish reel, and an Eastern European lament flavored with paprika – because Grams was more inclined to make the dominant loud sections raucous rather than catchy, though I was certainly delighted by the double-bass section providing whip-crack percussion by snapping their strings. I found myself rehabbing my appreciation for Clyne by listening to Segev's recording of DANCE the following morning.

In person, Segev's playing on the Elgar moved me far more than her excellent recording. Clearly, she was as comfortable with the orchestra as Grams and his musicians were with her. Hardly showy at all, her relaxed and dignified manner welcomed the audience and musicians to immerse themselves in the music along with her. Technical obstacles and difficulties never fazed Segev, so instead of capping strenuous journeys, we seemed to arrive more suddenly and dramatically at peak moments, where the cellist and Grams simultaneously turned up the voltage. The outer movements, the opening Adagio and an epic closing Allegro with no less than five sections, were teeming with rich contours and vivid contrasts. The more homogeneous middle movements, a Lento followed by an Adagio, were object lessons in how an accomplished artist keeps our interest between musical tempests.

Although the Knight wasn't filled to overflowing, a robust crowd was wildly appreciative of Segev's grace and verve. Nor was her encore, the Courante from Bach's Suite No. 3, chosen to reconcile us to her departure. The standing ovation for this sparkly gem was every bit as enthusiastic as the reception for the Elgar, deservedly.

Somewhere in Germany or possibly Austria, Christof Perick, Charlotte Symphony's most ardent champion of Strauss, must have been smiling when Grams deftly navigated the many delights of Aus Italien. This youthful symphonic poem, premiered in 1887 while Strauss was in his early 20s, committed the folly of stealing "Funiculì, Funiculà" for the cornerstone of his final movement when composer Luigi Denza could readily sue him for the theft. But the inventiveness of the young genius is unalloyed in the previous three movements. Opening Strauss's travelogue, "In the Country" isn't bucolic in the manner of Copeland or Beethoven. Its serenity, filled with gravity and sadness, builds to yearning drama and then to majestic triumph. Surprisingly, for a movement titled "Amid the Ruins of Rome," the music becomes livelier and turbulent, more like Strauss's later heroic tone poems – for as he wanders amid the remnants of the past, he conjures up the glories.

Most impressive and precocious for me was the penultimate "At the Shore of Sorrento" movement, written more than a quarter of a century before Claude Debussy's La Mer and no less accurate in sketching seagulls with the woodwinds and rippling waters with a harp. Grams had the Charlotte Symphony as immersed in Aus Italien as they had been in the Elgar, and the ebullience of the orchestra in the closing "Neopolitan Folk Life" was irresistible, no matter how cheesy you might find Strauss's "Funiculì" thievery. Hearing this still familiar tune played on bassoon and then as a march was just plain fun.