40+ Stage Company Explores the Endurance of Hopes, Dreams, and Magic in Rhonda’s Rites of Passage 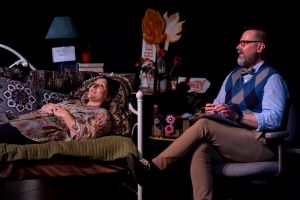 Written by Grace Winn Ellis and produced in its world premiere by 40+ Stage Company in Winston-Salem, Rhonda’s Rites of Passage is an exuberant romp through a middle-aged woman’s experience of self-actualization.

After half a lifetime of subverting her own interests to those of her family members, Rhonda Lee Morgan responds to a dare from her spicy friends and embarks on a classic hero’s journey.

Rhonda encounters enemies and obstacles as well as kind helpers and a soupçon of magic while on the road to trying to get accepted into a yearlong apprenticeship program at a prestigious, if slightly down-at-the-heels, New York theatre company.

Rhonda is warm and motherly. She takes care of everybody, and this is reflected in scenic designer Jennifer O’Kelly’s set. The playing area takes up the entire width of the Mountcastle Black Box but sustains a snug feeling with harmonious clutter and copious throw pillows. Costumes by Frenchie Slade continue the coziness with Rhonda’s fluffy, sweaters, textured fabrics, and comfy-looking, soft-gold running shoes (I want them). Add Shawn Hooper’s subtle lighting and Hen Lagesse’s stage management to the mix, and you’ve got smooth transitions throughout the many scene – and mood – changes.

The fallacy that Rhonda must overcome is the belief that she has to earn her place in life by serving everyone around her. When her boss calls and asks her to work on Saturday, she goes in. Her son, Denny, wants to stay in school on his parents’ dime. Her daughter Sylvie wants her to quit work and become her fulltime babysitter, so that she (the daughter) can teach yoga at the gym.

The number of people in Rhonda’s life who – either consciously or unconsciously – conspire to keep her in her place is staggering. The character of Aunt Ida (Berrans) reminds her to be modest, selfless, and help others, not herself. Dr. Myers (McMinn), her shrink, suggests not-so-subtly that her desire to pursue her passion at 45 just might not be practical. Nearly everybody, even the well-meaning ones, tells her that she’s too old to follow such an impractical dream.

In the opposite corner, we have Coach Sparks (Grace), who exhorts her to look out for No. 1, and her former teacher, Weiss (Hawkins), who wants to go almost too far to help her. She urges Rhonda to remind the head of the admissions committee at the theatre how Weiss has helped him out in the past.

Berrans was hilarious in the role of Rhonda’s perpetual-student son, who only calls when he is in trouble or wants money. He’s too busy rehearsing with his rock band and wiping his nose to study or get a job, but he’s not too busy to demand his parents take care of him – especially Rhonda. Berrans’ posture and mannerisms were 100% sulky but cocky late-adolescent male.

McMinn as Martin plays a pivotal role with his perfectly timed and delivered pronouncement at the end of Act I, but where McMinn got to shine brightest was in the part of Longstreet, the artistic director of the New York theatre where Rhonda aspires to intern.

Playwright Ellis has given the character of Longstreet an impassioned rant about the conflict between money and art, which he energetically expands into a tour-de-force moment, escalating that battle until something quite ridiculously magical happens.

McMinn also gets to be the conveyer of magic in another scene as videographer Rafe. Rafe helps Rhonda with her audition tape and gives her a keepsake from his lost love that will help her on her way. Together they find a precious, corny song that fits her voice and personality perfectly. To paraphrase: "The orange is ripening, squeeze it, squeeze it. The day is dawning, seize it, seize it."

The central conflict of the play is clearly delineated. Will Rhonda fall back on the old, self-denying ways that caused her to defer her dream 25 years ago, or will she finally catch the magic, spread her wings, and fly?

Rhonda’s Rites of Passage is a fun and original way to explore these ongoing questions, and a sympathetic look at the plight of those in the middle of life, the so-called “sandwich” generation.

It’s also a good reminder that when we finally give ourselves permission to do all the unreasonable things that we want to do, the universe has a way of knocking down the obstacles on our path and holding out a helping hand.

Rhonda's Rise of Passage continues through Sunday, October 9. For more details on this production, please view the sidebar.