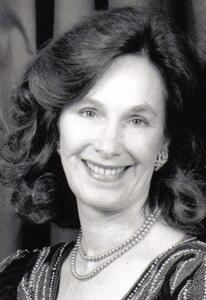 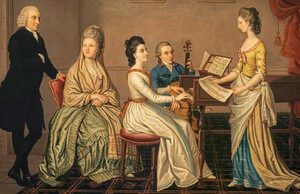 Baroque & Beyond launches its 15th season on Oct. 9th with a program of music popular among the drawing rooms of late 18th Century London. As a center for music publishing and innovative instrument building, particularly with regard to pianoforte design, London drew composers and virtuoso performers from throughout Europe. Public orchestral and large-scale theatrical entertainments were matched by an equal number of formal and semi-formal private concerts. These became important social events among the fashionable elite, often featuring the works and performances of prominent musicians, and attaching prestige to the households where they were held.

Keyboard sonatas with the accompaniment of a violin and cello were especially in demand. Haydn wrote about a dozen such sophisticated and engaging trios (appealing to both professional and amateur musicians) during his second visit to London (1794-96). The delightful A major trio comes to life on John O’Brien’s c.1782 copy of a Walther fortepiano. The instrument’s responsive voice allows us to appreciate how the violin and cello, though accompanimental, are nevertheless integral members of the ensemble. They provide essential tone color, texture, and rhythmic gesture to Haydn’s ingenious harmonic manipulations and contrasting lyrical and catchy folk-like phrases.

Folk songs, particularly Scottish folk songs, were very much in vogue in London at the close of the 18th Century, in part the result of a thriving Scottish music culture. Wildly romantic images of an exotic Scotland from Sir Walter Scott’s Waverly Novels, and the atmospheric paintings of Henry Raeburn helped fuel the fascination. Haydn’s initial settings for William Napier (a Scot settled in London) honor the simplicity of the national song, rejecting, as the preface explains, the “affected graces and variations” of “bad taste or caprice.”

The lullaby "O! Can Ye Sew Cushions?" is one of many songs collected (and often expanded or revised) by Robert Burns for James Johnson’s Scots Musical Museum volumes. The tune is a popular one, treated to many different settings, including Benjamin Britten in 1940. "Greensleeves" is a very old tune popular in both England and Scotland. The old words associated with the tune tended to be coarse in nature, sung by the chivalrous highwayman Macheath in Gay’s The Beggars Opera (1727). The sanitized version here comes from Allan Ramsay’s popular collection Tea Table Miscellany (1723-37).

Carlo Antonio Campioni’s duets and trios were extremely popular for more than two decades, particularly in London, where issues were disseminated widely. They reached all the way to Virginia to the young amateur violinist Thomas Jefferson, who, having asked his music vendor to acquire “everything” Campioni had composed for the violin, played an important role in the preservation of his music.

By invoking Jefferson as an important patron of the arts, we are also reminded of his intimate relationship with the institution of slavery. And so it feels appropriate to include a song from the Napier/Haydn collection sung from the perspective of a slave, “torn from that lovely shore” of Senegal and taken to the “bitter snow and frost” of Virginia. There has been much debate as to whether "The Slave’s Lament" was in fact written by Robert Burns, and if so, does this rescue the reputation of the beloved Scottish icon who once considered working on a sugar plantation in Jamaica a viable career option? The Slave’s Lament in D minor is a poignant, moving song which at the very least forces us to face the grim realities of the time.

Wherever the Czech composer Jan Ladislav Dussek lived, he had a knack for finding himself ‘in the thick of things,’ a tendency which often resulted in the need to suddenly seek residence elsewhere. It was his close ties to Marie Antoinette and members of the French aristocracy that necessitated his move to London c. 1789, where he lived for (a record) 10 years. He soon became a sought after teacher and pianist, performing a number of times with Haydn at he Solomon subscription concerts, as well as playing an important role in London’s developments in fortepiano design. Like Haydn, Dussek understood fashionable London’s taste for elegance and smooth lyricism as well as catchy tunes, and especially Scottish ones. Op. 20, No. 3, does not directly quote folk music, but we’ve added to our program the middle movement of Dussek’s Sonata Op. 31, No. 3, which is one of many embellished versions of the very popular song "Auld Robin Gray." Written by the Scottish poet Lady Anne Lindsey in 1792, with the original tune by Rev. William Leeves, it is the classic story of a young woman whose young lover goes off to make his fortune only to return and find her married to an older man out of duty to support her parents. All her misfortune is borne with good Scottish fortitude.

While not in keeping with the more antiquarian approach to the national Scottish song tradition, elaborate instrumental arrangements and settings were also very much in vogue. Beethoven (and Haydn in his later settings for Thompson) took this approach with fully realized keyboard parts and a very active violin and cello. You may recognize the tune from "O! Can Ye Sew Cushions?" transformed into "Oh Sweet Were the Hours," which with its chorus of “wine, wine, wine” is clearly no longer a lullaby. "Oh How Can I be Blythe and Glad?" comes from Robert Burns' poem of 1788, "The bonnie lad that’s far awa'." Beethoven gives it a fairly rollicking setting as the lover sings how “winter winds and driving snow “are nothing to her “tears of joy when he comes home.”

The concert will be introduced by beloved Chapel Hill resident and longtime friend* of Baroque & Beyond, and soprano, Florence Peacock. She will sing Malotte’s "The Lord's Prayer."

*10/6/22: We had erroneously listed Florence Peacock as the founder of Baroque & Beyond.