Celebrating the Absurd: XOXO Presents The Maids at the Mint Museum 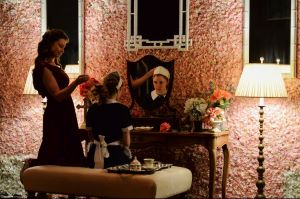 Everyone seems to have opinions about Absurdism. Some audiences are confused and disillusioned with the seemingly formless plot, and others regard the dramatic style as "pretentious." Of course, many theatregoers love its stylized performance qualities and ability to make them ponder the strangest of questions. Regardless, it is one of the less performed kinds of theatre for these very reasons. Theatre companies often have a fear of audience reactions to such shows, a risk not many producers are willing to take. Furthermore, there lies a great challenge in creating a meaningful experience out of the bizarre and incoherent. This was the pursuit of XOXO's production of Jean Genet's The Maids.

In order to create the right environment for any production, a creative team must consider the message the theatrical space will set. Although it is not certain what fueled XOXO's decision to partner with the Mint Museum for their show, this particular space provided a sterile yet intriguing atmosphere. There was no front of house display, the theater itself is small and conference-like. It felt like the audience was there to see theatre, to immerse themselves in the world of the play without any other distractions or spectacle.

This was confirmed by the elegant set design of Will Rudolph. The ceiling and a couple of the rails were adorned with soft tulle, providing a feminine and hazy feel to the space. Madame's bedroom, the play's only setting, was intricately designed. There was no doubt in my mind that this was a wealthy woman's room. The audience was left to pick up clues about who this character could be in the smallest of details: flowers, jewelry, furniture, and clothing. As we looked upon these items, sisters Solange (Kadey Ballard) and Claire (Kate McCracken) walked across the space. They interacted with each other in their own realm, bathed in pinkish light. The effectiveness of the lighting design, also by Rudolph, was truly admirable. The theater is equipped with relatively little lighting instruments, as it seems more of a conference space. Still, it was one of the most moving elements of the production, creating stark contrasts between elegant wealth and murderous shock. The costumes, designed by Beth Killion, added another layer to the already-fascinating world of the play. The technical elements existed between time periods, stylistically blending in and out of the past, a trend that carried into the performances as well. While this blending suited the Absurdist nature of the show, an even firmer commitment to that choice may have added more depth to the immersion director Matt Cosper has sought to create.

The performances of all three members of the cast were equally strong, holding their own well against each other. The plot follows Claire and Solange, who serve as maids to their wealthy, slightly neurotic Madame (Jennifer Adams). The sisters plot to kill their mistress in elaborate ways, spinning a tale about power struggles and mortality. Adams' Madame was despicable but fantastically witty. Her commanding presence served to add vigor to the production and revive the plot at times when the show's thematic content grew heady. McCracken and Ballard's dynamic as sisters was less convincing, but both had powerful individual performances. XOXO's focus on breath and gesture work was evident in this production. This cast succeeded in creating moments full of visceral emotional impact.

XOXO's production of The Maids is not only for those who love the Absurd. Audiences will leave the theater having experienced something that will make them ponder. Perhaps they will ponder the technical design, perhaps the gestures, but they will leave pondering. That is what great art does.

The Maids continues through Sunday, August 14. For more details on this production, please view the sidebar.