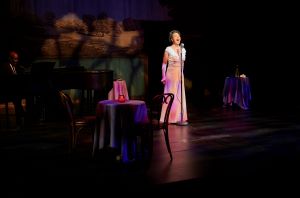 Those are the words I was left with at the end of Ebony Repertory Theatre's production of Lady Day at Emerson's Bar & Grill, directed by Wren T. Brown, part of the National Black Theatre Festival being held in Winston-Salem this week. Upon entering the Gerald Freedman Theatre at the University of North Carolina School of the Arts, audiences were greeted by a microphone centerstage illuminated by a single spotlight. I was told to sit near the front of the theater, which, admittedly, was a new experience for me, but I soon found out it was because I was playing the role of an audience member in one of Billie Holiday's final gigs.

Calling Lanie Robertson's Lady Day at Emerson's Bar & Grill merely a play or a musical feels reductive as it was more of a concert experience with monologues between songs, going through a set list as if it really were a jazz show at a bar. These monologues were given by Karole Foreman as an aged, emotionally exhausted Billie Holiday retelling her life experiences, starting with the lighthearted and ending with the tragic.

Foreman was joined on stage by only one cast member, Damon Carter, who played Jimmy Powers, Holiday's accompanist and also served as musical director for the production. Carter deserves a special shoutout as he is a spectacular pianist and played each song live. He also made an impact in portraying the quiet Jimmy, who took on an almost parental role trying to keep Lady Day on track between each song.

As for Foreman, she truly brought Holiday to life through her performance. Her voice was excellent for the role, bringing out the unique qualities of Holiday's half-talking, half-singing tone, a texture that is almost impossible to reproduce well. The monologues also took on a singsong quality and had their own rhythms that made them feel like musical in and of themselves. Foreman had the audience's undivided attention because of her engaging performance in these moments, even talking to specific audience members – like me, who she said looked like one of Holiday's parole officers.

Foreman's portrayal of Holiday was aided by Kim Deshazo's costume design and Anthony Gagliardi's hair and wig design. A portrayal of Holiday would not be complete without her iconic flowers behind her ear, and the dress Foreman wore was just like Holiday herself: elegant, but not gaudy. Edward E. Haynes, Jr.'s scenic design and Donna Ruzika's lighting design also worked together to make the stories told in the play even more effective, both in monologues and in each song. The two performers were surrounded by a few tables, and with only a spotlight on Foreman, the room felt cold and distant whenever Holiday was meant to be cold and distant. When she began to open up, more warm light flooded the stage, making the small set come to life alongside her.

Lady Day at Emerson's Bar & Grill starts with Holiday telling her "friends" (the audience) some of the lighter stories of her youth with the dry humor that comes naturally to those who have performed their entire life and have faced every roadblock imaginable. She's tired of singing the same hits night after night and she does not want to be seen as some kind of star because, as she says, "Nobody is better than you unless you think they are." But, she realizes that tragedy has become a common theme in her life. Every time something happens, though, the show must go on. When her parents died, she had to get back on stage right after. After she was released from prison, she had to give a performance at Carnegie Hall, one of the most famous venues in the country. Foreman's amazing performance showed how each problem added to the weight on Holiday's shoulders, becoming more and more distraught and confused as time went on.

There was one moment near the end that still sticks out to me. After going through a storm of emotions, Foreman's face became calm as and she began to tell all the things Holiday wished she could have done in her life. She wanted to have children and cook in the kitchen and own a club because that was her "heaven." Maybe she could have gotten those things if her past lovers had wanted to have children instead of getting her hooked on narcotics, or if she was allowed to perform freely the way she wanted instead of being restricted because she was a Black woman. In this moment, it became clear that misery must be a part of her, and it could not be changed.

As the lights went out with those final words, I felt great sadness over the life of Holiday. It is easy to see the lives of legendary musicians through rose-colored glasses, but Foreman and Carter showed that it can never be that simple. Foreman was able to portray a lifetime of emotions through a single look or motion, putting love and care into every word she spoke and sang. Carter's portrayal of Jimmy, although it may have seemed insignificant at first, ultimately showed that Holiday's music was the only thing capable of keeping her grounded, even with all the troubles she may have associated with it. It was an unforgettable performance, and I applaud everyone involved for creating something so moving and profound.