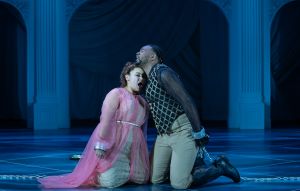 Italian for "Great Fox," Volpone, with music by John Musto and libretto by Mark Campbell, is a comedy inspired by the classic Ben Jonson play of the same name (1606). This Volpone premiered at Wolf Trap in 2004.

Guest conductor John McKeever, a UNCSA alumnus with a Doctor of Musical Arts in Orchestral Conducting from the University of Colorado Boulder, conducts the UNCSA Symphony Orchestra. And what an orchestra it is! They played the challenging score with equal amounts of feeling and technical skill and never overwhelmed the singers.

Guest artist Eve Summer, the stage director, is also a producer and choreographer. The latter skill shows in the way the singers/actors moved around the stage in gorgeous swirling patterns and hilarious “fight” scenes. Particularly funny was a "sword" that is barely visible.

The opera is a fizzy, funny romp through a world of vivid characters – each played by a standout artist. The director’s choice to set these memorable characters in a world of grace and beauty served to enhance their humanity on one hand while throwing their venality into sharp relief on the other.

There are enough puns and one-liners to tickle, but the humor is more situational than farcical, and the singers did a great job of sustaining the jokes from one scene to the next.

The scenic design by Jessica Trementozzi is a coolly elegant world of black, white, and shades of gray with warm gold accents, which contrast nicely with the hot emotions of greed and lust that emanate from the characters. Part of the fun was watching the scene changes with clever set pieces that defined the space and changing colors on the graceful draperies (lighting design by Schuyler Bento).

Volpone, a wealthy libertine, and his manservant, Mosca ("fly"), have been running a con on three of Volpone’s friends: Voltore ("vulture"), a lawyer; Corvina ("raven"), mother of Bonario; and Conaccio ("crow"), frustrated husband of the young and chaste Celia, a former nun. For a year, Volpone has pretended to be dying, as his three friends vie for his great fortune. Volpone extracts gifts from them, and Mosca gets tips, adding to their already overflowing treasure trove. As Volpone promises each of them that they will be his only "air," Volpone and Mosca are planning to take the money and sail from Venice to Genoa.

The house servants open the show, moving like a Greek chorus and singing a ridiculous dirge about the imminent demise of their master. Angelina Bassi as Castrato bravely let her voice crack, André Peele as Nano was a completely silly chef, and Spencer DesChenes as Epicine rounded out the three wily stooges, who were consistently humorous without ever mugging.

DesChenes doubles later in the production as the Prison Matron who bullies two young lovers.

Mosca arrives on the scene and Volpone prays to "Great God Gold" in "Thank you, Mosca." In his nimble baritone, Hall sang, "Art. Love. Sex. Nothing can compare. … though the last one comes close." This scene also introduces a running joke that is the melismatic intoning of the name "Genoa."

With Bradford’s warm, expressive tenor, Mosca would have been a lovely leading man if gold were not his only love. Bradford displayed his instrument in full and lush force in his Act II aria, "When a life has ceased, " an ode to the humble fly who is always the first to benefit from a death. It was supported by delicious buzzing, swarming music from the pit.

The music, in its variety of styles, was delightful throughout. The first act ends with the company singing a syncopated "Congratulations" as the three friends congratulate themselves on their apparent victory. Act II ends with a punchy rock-tinged vocal fugue, "Attention all, a verdict has been reached."

The female characters were particularly compelling. Celia, richly sung by Zentner, while put upon by both Volpone and her husband, nevertheless finds the agency to choose her own way and her own love. Romana as the mysterious Erminella ("ermine"), commanded attention with her frankly sensual presence. She charmed judges and villains alike, and tenderly sang a lullaby in her lustrous soprano. Horn was commanding physically and vocally, plotting and betraying her son in her shimmering voice as Corvina.

Zentner and Alston, as Bonario, shared a gorgeous duet in Act II, "Bonario? Yes. Is she gone?" Alston was appealing as the idealist son of the scheming Corvina. These two were charming together as the young lovers.

Lee, as the lawyer Voltore, was appropriately oily and conniving. Cornaccio, Celia’s overbearing husband, was well sung by Maize.

Costumes by Annika Low help define the characters. Romano was a vision in two Erté-inspired ensembles with voluminous three-quarter length coats over column dresses. In the second act, Bradford’s costume gets a fluttery, colorful cape, subtly transforming him him from fly to butterfly. Maize’s costume has a short, wing-like, crow-colored cape.

Lastly, a word about the venue: Intimately scaled at 177 seats with clear sightlines and acoustics, the Agnes de Mille Theatre is a great place to hear opera and see dance. The orchestra sits in a deep pit that helped it consistently support rather than cover the singers. The sound design by Sandy Garcia, is very well-balanced, which this company richly deserves.

If you think you don’t like opera, I challenge you to attend this one. The opera is sung in English, with vocal preparation by international artist Daniel Inamorato.  It’s fast and funny, and the music, although modern, is completely accessible and hummable.

Volpone continues through Sunday, April 24. For more details on this production, please view the sidebar.