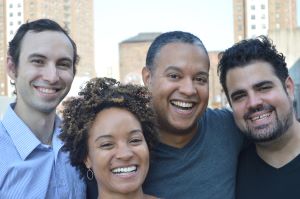 The Harlem Quartet was back in North Carolina over the weekend and stretching into Monday, February 21, playing concerts in Greensboro, Charlotte, and Raleigh, and offering outreach programs for a retirement community and two educational organizations as their visit came to a close. Some of the music was familiar, as the ensemble has been performing here and there in our state for well over a decade. Thus some chamber music enthusiasts in cities where they've been often heard have developed both affection and enthusiasm for the vibrant foursome and the programs they offer with such passion and incisiveness. With generous support from the Hon. Mary J. C. Cresimore, Chamber Music Raleigh presented two back-to-back Sunday concerts in the NC Museum of Art's SECU Auditorium, a space that sounds better than ever since its not-too-long-ago renovation.

Playing were violinists Ilmar Gavilán and Melissa White, violist Juan-Miguel Hernandez (a former member, subbing this week for Jaime Amadór), and cellist Felix Umansky (bios of all of whom many be found here and here). They work together like the proverbial well-oiled machine, and they seem to have more sheer fun playing chamber music than just about any ensemble you could name. That they play so well and with such consummate precision and with keen incisiveness and always overwhelming musicianship and artistry makes this a very special ensemble, indeed, and one that invariably delights its audiences – audiences that are not invariably representative of your customary conservative chamber music set. On this occasion, there was some applause between movements, and then that very fact elicited still more applause in recognition of those attendees' enthusiasm. Hooray!

The short, intermission-less program began with Mozart's "Dissonance" Quartet in C, K465. Program notes by Joseph and Elizabeth Kahn remind us of how wild and wooly this piece must have seemed to Mozart's audiences. It seems tamer now, but the drama in the introduction remains as striking today as it must have been back then, for there's as much suspense and emotion in those opening bars as in some of the late symphonies or operas. Hearing this four-movement work played so vibrantly and with such total commitment made at least one listener think that it might well have been enough, had the visitors given only this piece and then gone home – yes, it was that good.

But there was more, and what followed was – as the headline suggests – something quite different. First up was a setting for strings of an African dance, notated by the first violinist's father, Guido López-Gavilán (b.1944), one of the mainstays of classical music in Cuba. This piece, in turn, is one of the Harlem's most distinctive and distinguished musical calling cards, and "Cuarteto en Guaguanco" was again enthusiastically received here, as has been the case on previous occasions.

Three excerpts from Wynton Marsalis' At the Octaroon Balls were next. Yes, the jazzman composes, and the selections offered demonstrate his inventiveness and skill, ranging from "Rampart Street Row House Rag" to "Creole Contradanza" to the remarkable "Hellbound Highball" (which may be heard here in all its radiant glory).

The encore, as it were, was another train piece, this time by our own sometime resident Billy Strayhorn, the world-famous "Take the A Train" (which was known as the Duke's "signature composition" – by Billy). Here's a Harlem video – with their now-regular violist on view.

Thus the program gamut ran from Mozart to jazz with some Afro-Cuban rhythms and New Orleans howling thrown in for good measure.

They're wonderful players to watch as well as to hear, individually and collectively, and fill-in violist Hernandez fit back in like a glove, despite his decade-long absence from the ensemble. (As he said at the reception, he knows the rep!) In the jazzy pieces, Umansky slapped his cello as if it were a bass, and it spoke for him sonorously, indeed. The two top voices seemed cut from the same rich fabric – it must have been damask, at least – and thus from bottom to top this was a fabulous ensemble to behold. Three cheers!

And a great, great time was had by all. Don't miss 'em the next time!