The Greensboro Symphony Orchestra Journeys Through Beethoven and Other Favorites 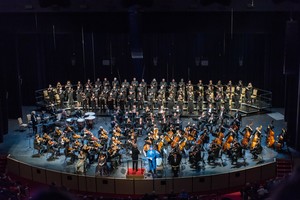 What can one say about the Symphony No. 9 in D minor, Op. 125 ("Choral") by Ludwig van Beethoven that hasn't already been said? Is it the composer's greatest work? One of the artistic pillars of Western civilization? The first symphony to employ human voices – both choral and solo? An influence on almost every composer since its first performance? These statements are all true.

Still, it is a problematic work. Clocking in at over 70 minutes, it is a test of endurance for all involved. The Greensboro Symphony Orchestra, led by music director Dmitry Sitkovetsky, maintained focus and energy through the work with amazing tenacity. Each movement is complicated and difficult to follow, although the brilliant ending tends to make one forget about the struggle of the journey.

The first movement begins shrouded in mystery as if in a void, with the main theme slowly coalescing from fragments that have been haltingly offered. Once assembled, the theme breaks out with violent passion. That's just the beginning of the dramatic labyrinth into which Beethoven leads the listener. GSO's playing captured the complexity of the movement, alternating between the lyric and the dramatic to good effect.

Surprisingly, the second movement flies (some listeners of a certain age will remember that this music was used at the end of the Huntley-Brinkley Report): Sitkovetsky's fast tempo held the players' feet to the fire. The headlong motion becomes even more animated in the Trio. The alternating episodes of the two sections resulted in a satisfying, energetic frolic.

The slow movement is found in the third position. While Sitkovetsky's version was not as slow as some, the orchestra's playing offered some relaxation and contemplation after the first two stormy movements.

The finale's introduction (Wagner called it the "fanfare of horror") erupts, shattering the calm brought by the previous movement. The music continues, searching for the "right" tune, examining the opening measures of the previous three movements, as well as hints of the upcoming "Ode to Joy," before the fanfare returns. What a delight it was to hear baritone Marcus DeLoach stop the madness with Beethoven's words "Oh Friends! Not these sounds!"

What follows is Schiller's poem, sung to Beethoven's "Ode to Joy" tune. De Loach's joyous sound, occasionally joined in by the chorus, was a winner. Then a series began featuring different arrangements of the four soloists and the chorus. Tenor Rodrick Dixon provided a full-voiced dramatic sound with thrilling high notes. Mezzo-soprano Nancy Maultsby offered gorgeous colors, adding a rich middle to the proceedings. Soprano Lyubov Petrova added the frosting to the four-tiered cake.

The last movement is the longest of the four, and it is loaded with orchestral, choral, and quartet interplay. The Greensboro Symphony Master Chorale, well-prepared and remarkably spirited for "only" 60-some voices led by Jonathan Emmons and James Keith, sounded great. Sitkovetsky topped off the evening's music with an accelerando into the final measures that was exhilarating.

Before Beethoven, the evening opened with the iconic "Fanfare for the Common Man" by Aaron Copland, which was reused by Copland for the opening of the last movement of his third symphony as well as in movies and TV shows; a version was recorded by at least a couple of rock bands, including Emerson, Lake & Palmer, and used as the introduction to one of the Rolling Stones' tours in the U.S.

The piece was performed without introduction, with Sitkovetsky launching straight into the music. This performance used the original instrumentation: four trumpets, three horns, three trombones, tuba, timpani, bass drum, and tam-tam (a huge cymbal of sorts). The three-minute work provided a showpiece for the impressive brass and percussion sections of the GSO; both played with strong heroism.

The 1812 Overture by Pyotr Ilyich Tchaikovsky utilized most of the above forces and added a couple of percussionists to the original trio: timpanist Peter Zlotnik, who also saw lots of action in the Beethoven, principal Arnold Wiley Sykes III, and assistant principal Beverly Naiditch were joined by Doug Howard, Danny Frye, and Eric Willie. This work, too, is well known, heard by audiences in many contexts – 4th of July, Disney World, and rock bands.

The music battles between the Napoleonic French and the Russians, complete with tunes from both countries, but Russian eventually beats the French national anthem "La Marseillaise" to shreds. The performance was great fun for the entire audience.

Not everything was perfect – some might have found the tempo of Copland's music a bit too slow, and there were a few flubbed entrances. In addition, the Trio in the second movement of the Beethoven was possibly too fast. I couldn't hear the first movement's main theme return in the final movement – but perhaps this is a problem with the "enhanced" sound system of the Tanger Center. Maybe they are still fine-tuning it.

As Lisa Crawford, President and CEO of the GSO stated, "this concert has been planned for three years" for a celebration of Beethoven's 250th birthday celebration in 2020. The GSO's powerful presentation of three staples of Western classical music reminds us how important live performances are in our lives.