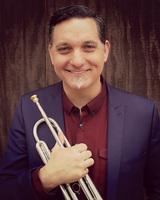 The following preview has been provided by Triangle Brass Band.

The Triangle Brass Band is excited to feature Superstar Trumpet Soloist, Rex Richardson, on its American Celebrations concert on December 4th, at Christ Baptist Church in Raleigh.  Renowned as a champion of new, genre-busting music featuring the trumpet as a solo voice, Yamaha Performing Artist Rex Richardson was named the 2008 Brass Herald International Personality of the Year and has been called "one of the finest virtuosos of our time" (Brass Herald, 2018).   A veteran of the acclaimed chamber ensemble Rhythm & Brass, jazz legend Joe Henderson's Quintet and Sextet, William Russo's Chicago Jazz Ensemble, and the world-renowned Brass Band of Battle Creek, his hundreds of soloist appearances include festivals and ensembles on six continents, such as the Phoenix Symphony and Thailand Philharmonic Orchestras, the U.S. Army Field Band and Tokyo Symphonic Winds, England's Fodens Brass Band, and the U.S. Air Force's Airmen of Note Jazz Ensemble.

Music to be performed by the Triangle Brass Band includes Robert Jager’s Esprit de Corps, a tribute to the United States Marine Corps Band, the Finale from Giannini’s Symphony No. 3, and the dramatic Suite from West Side Story, music of Leonard Bernstein.  Mr. Richardson is featured on 3 World Winds, a concerto by noted trumpet master Allen Vizzutti, Charles Booker’s arrangement of Thad Jones’ gentle ballad, "A Child is Born," and several holiday classics, including "Silent Night," "Three Kings Swing," and "Santa Claus is Comin’ to Town." Mr. Richardson will perform on B-flat trumpet, piccolo trumpet and flugelhorn, on the various concert selections. The program includes other festive holiday music, with tunes such as "The Holly and the Ivy" and "A Christmas Festival." The evening promises to be an awesome outing for the Triangle Brass Band with their virtuoso guest artist!