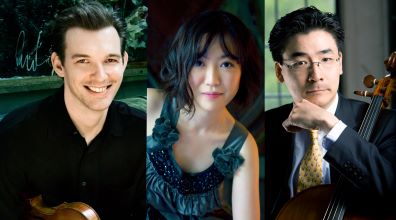 Duke University's Department of Music hosted the Horszowski Trio as Artists in Residence during the 2019-2020 school year, one which will be long remembered for its many unique challenges. Although in-person classes were suspended across the world, the trio was able to continue offering mentorship and performance at Duke through online learning and livestreamed performances. Saturday evening's concert provided some relief from the past year's uncertainty, offering catharsis to the artists and audiences by allowing us to return, live and in person.

For Vera by Duke graduate student Ryan Harrison premiered first at this concert, having been selected by the Horszowski Trio from Spring 2020's virtual composition residency as the work they would rehearse and perform. Harrison explained shyly that the work was inspired by his previous studies in psychology, noting Dr. Heinz Lehmann's interviews with a woman named Vera who suffered from debilitating schizophrenia. For Vera is jarring, full of "crunchy," dissonant harmony and disjointed rhythm. Structured in five short movements, it is loaded with emotional ebb and flow, with occasional jagged, percussive motions. The trio's interpretation of the work was not inherently sad or troubled, but shaded with nuance that painted a complete picture of someone whose story might otherwise have been lost. The trio always worked as a unified team, even when the cello and violin lines crossed each other uncomfortably, or when the piano took the solo voice and the strings blended into background chords. Jesse Mills (violin) and Ole Akahoshi (cello) delivered lush sounds that tricked the ear into hearing a full string section, but also captivated with their occasional soloistic moments, matching and complementing each other even through wildly varied ranges and more contemporary playing techniques. Whether they played pizzicato (strings plucked with fingers), spiccato (bouncing of the bow off the string), or col legno (using the wooden side of the bow against the strings), they always seemed to match their sounds.

Scott Lindroth, who recently stepped down after his 13-year tenure as Vice Provost for the Arts at Duke, also premiered his composition T120. This work metaphorically depicts the transitions that the pandemic has forced upon us, as its conception does; Lindroth described his initial, cloistered work that was slowly introduced into a limited social setting - rehearsals - until it was finally released to the larger public. A work in two movements, T120 presents rhythmic and melodic motives in a very calculated way, and then reexamines them through an emotional lens. The first movement, "Light and precise," began with a rhythmic line on the violin that, unfortunately, was not as precise as expected, but energetically bubbly throughout. It was lively and interesting, moving through exciting permutations that evoked a sense of everyday hustle and bustle through funky, catchy rhythms. The second movement, "Shock, then patient and quiet" was indeed much more emotionally evocative, taking more time to unfold in haunting, ethereal high strings and long, reverberating resonances in the piano. The combination of frenetic activity and stillness blended into an enthralling performance full of great depth of sound and tonal beauty.

Robert Schumann's Trio in D minor, Op.63, one of his more well-known works, rounded out the program. Packed with contrasts, the work exemplifies the journey through difficult situations, ending with a sense of triumph over great adversity. It also exemplified the performers' talent, showing how well they know not only their own instruments but each others' playing. The strings were always balanced, through breathy soli sections and passionate, almost orchestral-sounding swells. Rieko Aizawa's piano, likewise, added depth through a variety of contrasts, from the first movement's complex and searching energy all the way through the fourth movement's appreciative optimism. The ensemble examined this work with as much care as the contemporary compositions, allowing it to meander, develop, and evolve.

The only real issues I found in the trio's playing the whole night were Jesse Mills' distracting motions in his body and facial expressions while playing, and perhaps the start of Lindroth's work. All three pieces equally investigated the variety of emotions present in the human condition, especially the more subtle ones: trepidation, hopefulness, gratitude, and fear of being misunderstood. The musicians were all able to express genuine, intangible sentiments, despite the sometimes unsettling languages used to do so. As far as programming themes go, the on-paper complexity of the works may have been intimidating, but ultimately seemed to encapsulate the emotional turmoil of the last year and a half in a very relatable way.