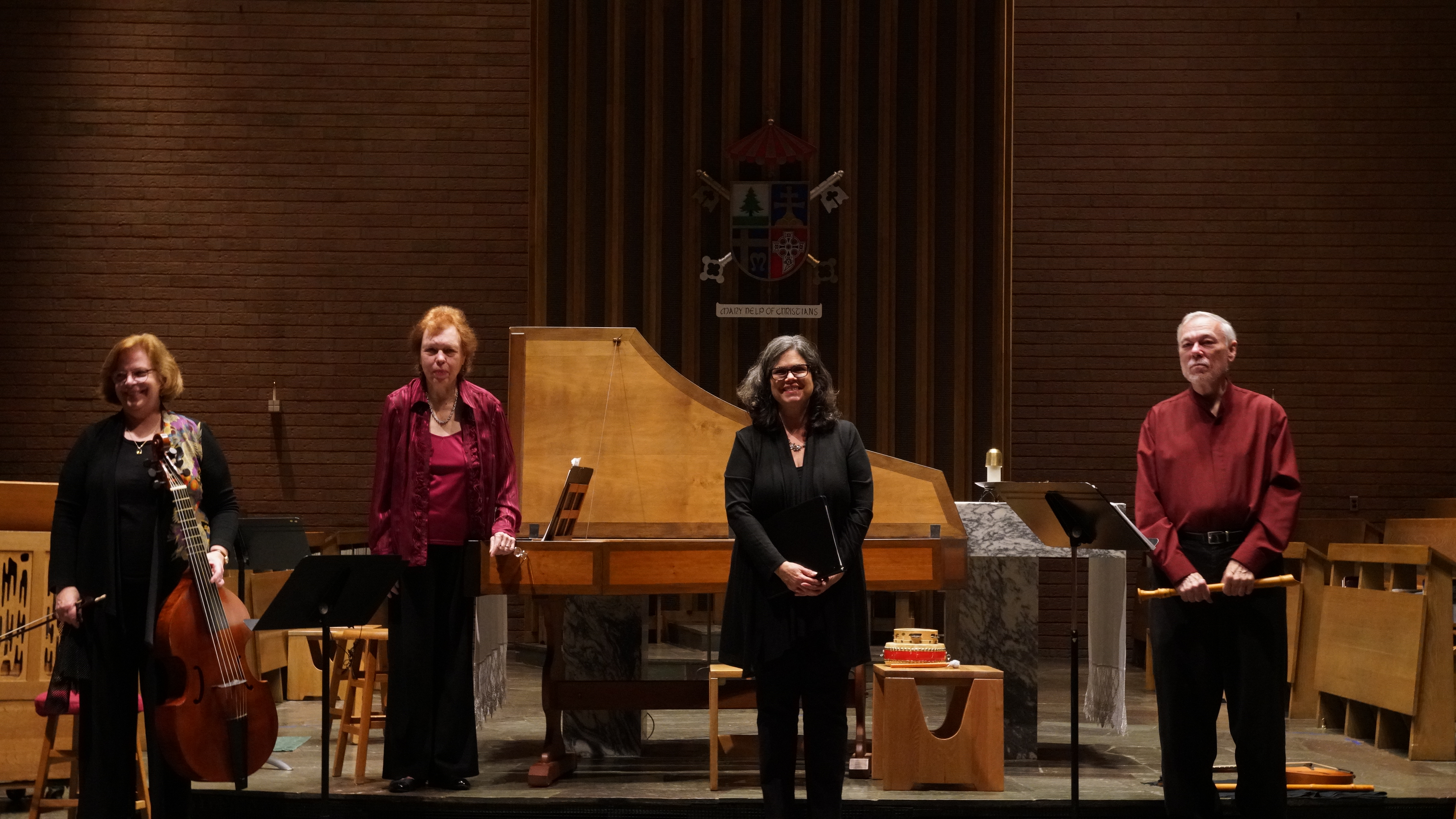 Carolina Pro Musica presents the first concert of 2021 with a delightful show featuring music in England. The show will be available online February 27, 2021 at 7:30 PM.

The program features music of Henry Purcell, an English composer that incorporated Italian and French elements in his compositions, but created a uniquely English form of Baroque music. He is generally considered to be one of the greatest English composers; as no native-born English composer approached his fame until Edward Elgar, Ralph Vaughan Williams, and Benjamin Britten in the 20th century.

To understand much of the theatrical music of Purcell, Handel and even J.C. Bach, one must know stories of past cultures as that was the interest in trying to resurrect ancient drama. One of Purcell’s often used forms of composition involved the ground bass - a bass line of a limited number of notes repeated throughout a song. Purcell sometimes modified these ever so slightly. Four of Purcell’s songs on this concert employ this mesmerizing technique. Purcell and Handel make use of the flute or recorders in imitation of creatures or even a quarrel, as can be seen in the fighting recorders in the closing work. Purcell died relatively young and there were no other native-born composers to carry on the work. It was immigrant composers who made England their home and continued the composing.

George Frederick Handel composed the first version of Acis and Galatea while he was living at Cannons (the seat of James Brydges, 1st Duke of Chandos) during 1717-1718. While living in Italy he had written a similar work. This, however, was Handel’s first dramatic work in the English language and was influenced by the English pastoral operas of Johann Ernst Galliard and Johann Christoph Pepusch. The flute sonata in E minor by Handel is included in his complete works although there is doubt as to its authenticity. Some believe it was written by J.A. Hasse, a well-known European composer whose wife performed with Handel.

Johann Christian Bach was the youngest son of Johann Sebastian. He studied music with his father and after his father’s death studied with his half-brother C.P.E. Bach. After a brief time in Italy, he moved to London (1762) where he became known as the “London” Bach. He enjoyed a career as a performer and composer of all types of music. His operas were in the new style without the da capo aria as was popular in the earlier period.

Nicola Matteis came to London in the early 1670s and according to the diarist Roger North, had a city merchant as a sponsor, who schooled him in the ways of currying favor from the gentry (by allowing them to accompany him in parlor recital and other minor performances). His playing astonished everyone. Matteis enjoyed great artistic and commercial success with his published music, notably four books of Ayres (1676, 1685). Many of his compositions were written upon a ground bass.

Johann Christoph Pepusch was born in Berlin. He studied music theory under Martin Klingenberg, cantor of the Marienkirche in Berlin. At the age of 14, he was appointed to the Prussian court where he gave music lessons to the future Frederick William I of Prussia. In about 1700, he settled in England. In 1726, Pepusch founded The Academy of Vocal Music with others; in around 1730-1, it was renamed The Academy of Ancient Music. He remained Director of the Academy until his death in 1752. During a period of twenty years, Pepusch directed the musical establishment at Cannons, where he was employed by the 1st Duke of Chandos. For a few years he worked alongside George Frederick Handel.

Gottfried Finger was a Moravian Baroque composer. He was also a virtuoso on the viol, and many of his compositions were for the instrument. He also wrote operas. Finger was born in Olomouc, modern-day Czech Republic, and worked for the court of James II of England before becoming a freelance composer. His 12 Sonatas for Diverse Instruments, Op.1, date from 1688.

The music of Purcell is sprinkled throughout this remarkable show, the Flowering of the English Baroque, which will be presented as a virtual concert on Carolina Pro Musica’s YouTube channel. There is a direct link from www.carolinapromusica.org.

Due to Covid-19 Pandemic, a donation is requested to assist with streaming the events: $16 general, $8 seniors and students. Donations can be made on the organization's website.