A Superb Wind Symphony and the Man Who Inspired It 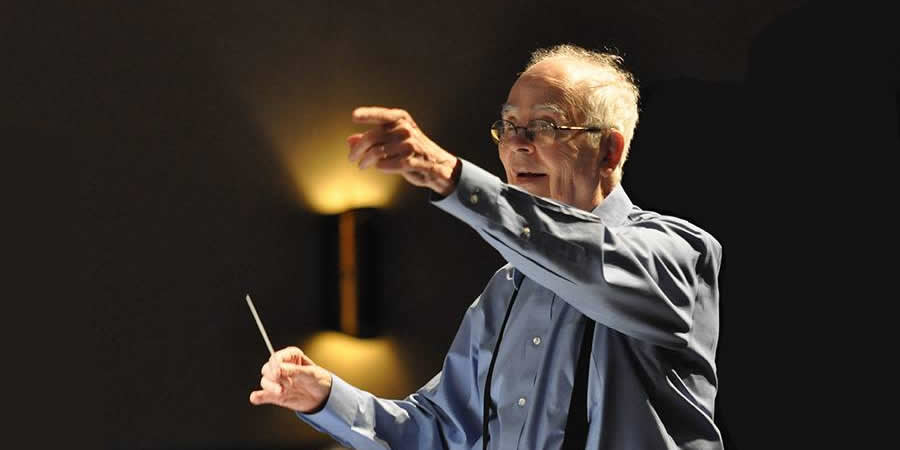 First, a disclaimer – Critics are supposed to be like judges in our legal system: having no bias for or against those whom they judge. I must admit to bias in this case, having been a student of Dr. Paul Bryan ("PB," as he's affectionately known), having played under his baton, and having benefitted from his having adjudged me to be the winner of a friendly competition for the post of what was then known as "Student Carillonneur," required to play the 50-bell instrument in the tower of Duke Chapel every day for two years when undergrad school was in session. So, when this concert was announced in celebration of his upcoming 100th birthday (the actual date is March 7), I knew I wanted to be there.

To address the musical criticism element of this writing first, it's clear that the Duke Wind Symphony (once known as the Duke Concert Band) is a first-class musical ensemble, in the mold of the finest collegiate groups with international reputations such as the Eastman Wind Ensemble or the University of Michigan Symphony Band. Conductor Dr. Verena Mösenbichler-Bryant is vivacious, energetic, and inspiring, with a baton technique to match. She was also the person who planned this concert, bringing over 100 alumni back to campus – former members from PB's long tenure as conductor (1951-1988). When the alums joined the current ensemble on Baldwin Auditorium's stage for the concert's second half, there was barely enough room left for a conductor's podium. The logistics surrounding this effort were herculean, but the number of alumni who returned to participate was evidence of the affection and appreciation in which Bryan continues to be held by his former students and his faculty colleagues.

Rather than comment extensively on each of the works performed, the following paragraphs deal more with Bryan's association with these compositions.

The concert opened with Robert Ward's "Jubilation - An Overture." This well-known work, composed in 1946 and revised in 1958, was a staple of Bryan's repertoire, long before Ward joined the Duke faculty after leading the North Carolina School of the Arts. The two musicians were also good friends.

Next came a 2019 march, Elysion, by the Austrian composer Sebastian Schrami. The Austrian connection: PB established semester-long programs for the Duke Wind Symphony in Vienna, during the 1970s and '80s; present ensemble conductor Mösenbichler-Bryant, herself Austrian, conducted the first performance of this work in Shladming, Austria, last year. Of particular note in tonight's offering were the perfectly-ordered crescendos and diminuendos, a feature not often found in traditional marches.

Pendulum, a 2018 composition by Steven Bryant, the conductor's husband, includes a second movement titled "Nocturne (in honor of PB)." The melody of this movement was first written on a napkin in Bryan's home on the occasion of his 98th birthday; it features a solo euphonium, the instrument which PB continues to play almost daily. Pendulum is a significant addition to the repertoire, not only for the lyricism of the "Nocturne," but for the exuberance of the 3rd movement, "Exclamation!," and the colorful tone clusters and panoply of percussion voices in the 5th movement, "Zeal."

The trumpet section joined the evening's hall of fame in the fourth movement of Vittorio Giannini's Symphony No. 3. Why this music? Because, in Giannini's words, "(it) was composed on a commission by the Duke University Band and its conductor, Paul Bryan, during the summer of 1958." In its masterful score, Giannini, who became the first Chancellor of the NC School of the Arts, created a rhythmic and tonal palette which sounds as if Leonard Bernstein must have been acquainted with it when writing some of his own scores.

An intermission served as time for the alumni musicians to make their way onstage, creating an ensemble of Mahlerian size. Their first offering: Henry Fillmore's 1933 march, "His Honor," which was on the program for PB's first Duke Concert Band concert on March 15th, 1952. This was followed by the world premiere performance by Duke faculty member Anthony Kelley's "History's Whispers (Fanfare in Blue)," composed especially for this concert. The thoughts which accompanied the creation of this all-too-short work are evidenced by Kelley's own words, a part of the evening's program notes:

"I composed a 'fanfare in blue' because recently, P.B. and I have enjoyed some conversations about blues and vernacular music, and since the premiere will happen on the last day of Black History month, I figured a touch of 12-bar-Blues might add a bit of texture to the event. I also endowed the piece with special codings throughout: The first instruments we hear are the Euphonium and String Bass (the instruments of P.B. and that of his beloved wife and Duke legend, Dean Virginia Bryan). I wrote a piece 200 seconds in length, with the second half containing an epically heroic 100-note blues solo for the Euphonium. The tempo of the piece is the quarter note at 100. The side drum obsessively articulates a reference to a march that P.B. composed with one of his friends." Bravos to Kelley for creating what might have been a "niche" piece but for the fact that the listener isn't aware of those "special codings" because "History's Whispers" succeeds simply because it's such good music.

Next came music by Percy Grainger, the internationally-known composer and pianist: his setting of "The Annunciation Carol," as edited and enlarged from the set of parts in Duke's music library by Mösenbichler-Bryant. Why Grainger? Because Bryan brought him to Duke to play some of Grainger's music as well as to play Grieg's celebrated Piano Concerto, as arranged by Grainger for piano and concert band. (It was an event significant enough that I still have a copy of that April 8, 1958, program. Grainger used music, but needed no page-turner because he had devised a system with music on a roll not unlike a player-piano roll, almost out of sight at the front of the Steinway's pin block, the music advanced by means of a foot-operated pedal.)

The concert entered its final phase with a "return with us now to those thrilling days of yesteryear" theme. First came the march referred to in Kelley's program note above. Revealing another side of PB's mind, this music is titled "March 'Boya'." It was composed by Robert Trevarthen and Bryan, but only those "in the know" could translate this title. If those under the age of 18 will stop reading at this point, I'll reveal the secret meaning of "Boya," as insouciantly proclaimed by PB himself: "Blow it out your ass."

Three works remained on the program: Johann Strauss Sr.'s "Radetzky March" and the Duke Alma Mater and the 'fight song,' "Blue and White." Of course, Bryan had conducted these works too many times to count, but the real connection was that he was onstage to conduct them now, his wheelchair having been guided to the podium, where he was assisted to a conductor's chair to reign over the massed ensemble, only seven days before his 100th birthday.

If his age has made it difficult for him to stand for long periods, his mind is still sharper than most. When he takes the baton in hand, the years fall away as the never-forgotten skill and musicianship take over. He didn't just "beat time," but did what he has done at Duke, and in Austria, Italy, Hungary, Germany, and the Czech Republic: he made music; made music and friends for life, made music to inspire and enrich the lives of all who played and listened to it. Thanks to Mösenbichler-Bryant and her many helpers, to Steven Bryant and Anthony Kelley for their new music, and to the Duke University Wind Symphony for letting all of us share this tribute to a man who deserves it not because he's 100 years old, but because he's 100 years young, still inspiring musicians young and old to speak that most universal of languages.