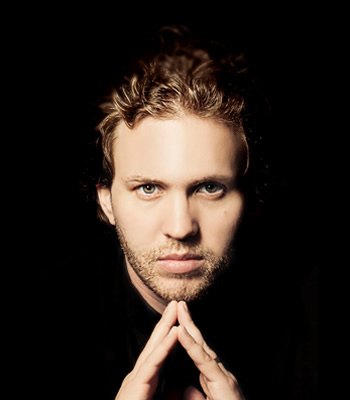 What do you get when you combine gorgeous melodies with extreme physical power? Any Rachmaninoff piano work, but especially his Piano Concerto No. 3. Performed by pianist Natasha Paremski, this wild ride is the centerpiece of the NC Symphony's latest series of programs, led by Austrian-born guest conductor David Danzmayr. Both artists have performed with the NC Symphony before (in fact, both in the 2017-18 season), but their acclaim is spread internationally. Danzmayr is currently the chief conductor of the Zagreb Philharmonic in Croatia but also spends time in Columbia, Ohio, as director of the ProMusica Chamber Orchestra – and practically everywhere in between. Paremski, who has been professionally performing since the age of 9, plays with orchestras, as a soloist, and as a chamber musician throughout North America, Europe, and Asia. Unsurprisingly, the NC Symphony, with these guests, created an excellent program.

Rachmaninoff's third Piano Concerto, in D minor, Op. 30, will test any great pianist in many categories – it is over 40 minutes of physical endurance with rapid cadenzas and fierce chordal melodies, punctuated in between by moments of languid expression. Paremski rose to this challenge with grace. The first movement begins with an inquisitive melody played in octaves by the piano, which soon explodes in a dazzling fury of notes. There were a few moments where the orchestra and Paremski seemed to be disconnected, but that was soon rectified as the concerto went on. The music's capricious, organic flow from one theme to the other was mostly led by the piano – in fact, taking off into the next mood as the orchestra follows. The first movement's powerful cadenza saw Paremski skillfully drawing the melody out from harsh, rapid-fire chords. The passionate Intermezzo led directly to the Finale with an accelerando, through which Paremski and Danzmayr were quite glued together. Cadenzas in a stream-of-consciousness style jumped from one theme to another, similarly to the first movement but perhaps even more surprising. A final, sudden push to the incredible coda brought the (nearly sold-out) audience to their feet immediately.

Contemporary era Russian composer Lera Auerbach's Icarus opened the second half of the concert. The level of programmatic relation to the title's ancient Greek myth could be determined by the audience, but the ancient Eastern tonality is suggestively present in certain moments. Rumbling, accented low strings (the NC Symphony's cellos and basses were wonderful here) set a stage full of tension. In fact, the whole piece is riddled with anxiety, especially towards the end, as dissonant clusters ascend at a painfully slow tempo, evoking Icarus' doomed climb to the sun.

Richard Strauss' Suite from Der Rosenkavalier, a favorite of musicians and audiences alike, is full of comedy and intrigue, just like the opera. The NC Symphony's brass shone the most here, with a lovely bright timbre throughout. Danzmayr's conducting, particularly for the joyful waltzes, was vibrant and full of strong rubato. Even the more serious sections of the Suite maintained a joyful bounce, easing the tension of the program's previous music for a glorious and sentimental finale.

This program repeats in Raleigh on Friday and Saturday, February 28 and 29, in Meymandi Concert Hall. See our sidebar for details.