Baroque & Beyond Concludes Season with Works by JS Bach, Telemann, and CPE Bach 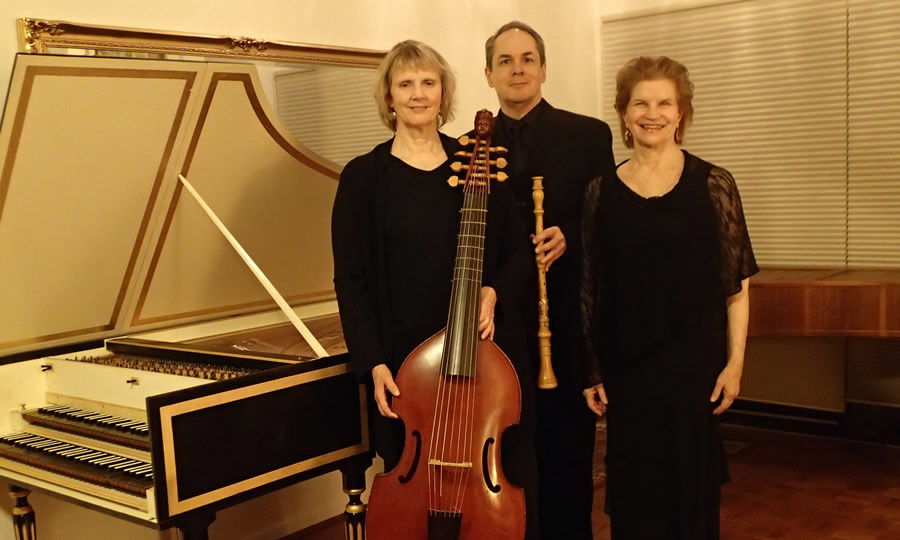 All in the Family – the extended Bach family, that is. Baroque & Beyond concludes its regular Chapel Hill season on March 8 with a concert of works by Johann Sebastian Bach, his colleague and close friend Georg Philipp Telemann, and Carl Philipp Emanuel Bach – son of J. S. and godson of Telemann.

The performing ensemble is Zephyr, a versatile ensemble featuring baroque-era wind and string instruments with harpsichord. The ensemble focuses on the rich repertoire of baroque music from the seventeenth and eighteenth centuries. Zephyr's wind player, William Thauer, is an accomplished musician on various baroque and classic oboes, including oboe d'amore and oboe da caccia, as well as various baroque recorders. Zephyr's string player, Gail Ann Schroeder, is a consummate musician who specializes in instruments of the viol family, from treble viol to viola da gamba. The ensemble is rounded out by harpsichordist Beverly Biggs, who performs on her double-manual French harpsichord, one of several keyboard instruments in her collection.

The program includes a sonatina and two trio sonatas by Telemann; a harpsichord fantasy and viola da gamba sonata by C.P.E. Bach; and a solo sonata and trio sonata by J.S. Bach.

Tickets ($20) for All in the Family are available in advance from Preservation Chapel Hill at 919-942-7818 or https://www.preservationchapelhill.org/baroque-beyond. Tickets will also be available at the door.

The concert venue is Holy Trinity Lutheran Church at 227 East Rosemary Street, Chapel Hill, NC 27514. (This is the new sanctuary.) Parking is available near the sanctuary and in multiple parking lots/garages within a block or two of the church.

For more information about the baroque period, our musicians, and the Baroque & Beyond concert series, visit www.baroqueandbeyond.org.

Baroque & Beyond – North Carolina, now in its 13th season, produces period-music concerts on instruments of the period under the direction of Artistic Director and harpsichordist Beverly Biggs. It has earned the affection of its audience and the respect of its peers in providing music of the baroque era, with occasional excursions into the classic era. Period instruments and historical performances practices are a hallmark of the concerts, along with interesting and innovative programming. The series is produced under the nonprofit umbrella of Preservation Chapel Hill, which has a rich history of supporting historical concerts and the arts.

William Thauer, baroque oboe and recorder. Praised by the Boston Globe for his "elegant oboe playing," William Thauer performs with Baroque & Beyond, the North Carolina Baroque Orchestra, NCBO Chamber Players, Mallarmé Chamber Players, and Raleigh Bach Soloists. He has been a featured soloist on the Bach Series at Duke Chapel, a longstanding member of the Dallas Bach Society, and a guest performer with the Houston Bach Society, Washington Bach Consort, Magnolia Baroque, Charlotte Bach Akademie, Bach Society of Charleston, Bach Vespers at Holy Trinity (NY), Grand Harmonie (MA), and Denton Bach Players (TX). Prior to moving to North Carolina, he performed frequently with The Handel and Haydn Society, Boston Baroque, Concert Royal, and l'Orchestre Baroque de Montréal. He has recorded for the Atma, Reunion Studios, and Virtuosi labels, and has written articles on oboes and their repertoire for recordings on the German label, Ars Produktion.

Gail Ann Schroeder graduated from the University of Michigan with a Bachelor of Music degree in Music History. She furthered her performance studies on the viola da gamba at the Royal Music Conservatory of Brussels, Belgium, with Wieland Kuijken, obtaining her First Prize and Higher Diploma, with distinction. She subsequently taught viola da gamba, pedagogy and directed the viol consort at the Brussels Conservatory from 1988 to 2002. Ms. Schroeder has performed extensively as soloist and with numerous ensembles including the Huelgas Ensemble, Catacoustic Consort, Combattimento Consort Amsterdam and the Alabama Symphony . She has participated in numerous radio and television productions, and on CD recordings for such labels as DHM, Sony Classical, Ricercar and Erato. Since returning to the USA in 2006, Ms. Schroeder has been in demand as a teacher and ensemble coach at workshops for the Viola da Gamba Society of America, the Amherst Early Music Festival, Mountain Collegium and has participated in the French Baroque Project at the University of Alabama. Currently living in North Carolina, she teaches privately, free-lances on viola da gamba and is artistic director of Asheville Baroque Concerts.

Harpsichordist Beverly Biggs is Artistic Director of the Baroque & Beyond early-music concert series based in Chapel Hill. A freelance harpsichordist, she has performed with the North Carolina Symphony, NC Bach Festival, NC Baroque Orchestra, and Chamber Orchestra of the Triangle. She lived for many years in the Pacific Northwest, where she served as founding artistic director of Connoisseur Concerts and Allegro, directing and performing for several long-running series like the Northwest Bach Festival, Period Music at The Met, Music in Historic Homes, and the Royal Fireworks Festival & Concert; and touring in the U.S. and Canada. She holds performance degrees from Oberlin Conservatory and Southern Methodist University. Her mentors include the late Gustav Leonhardt, Alan Curtis, and Margaret Irwin-Brandon. She is featured as a soloist and collaborative musician on recordings with Bravura Discs, Alienor Records, and Arabesque. She has also performed U.S. and world premieres of contemporary works for harpsichord duo. www.beverlybiggsharpsichord.com