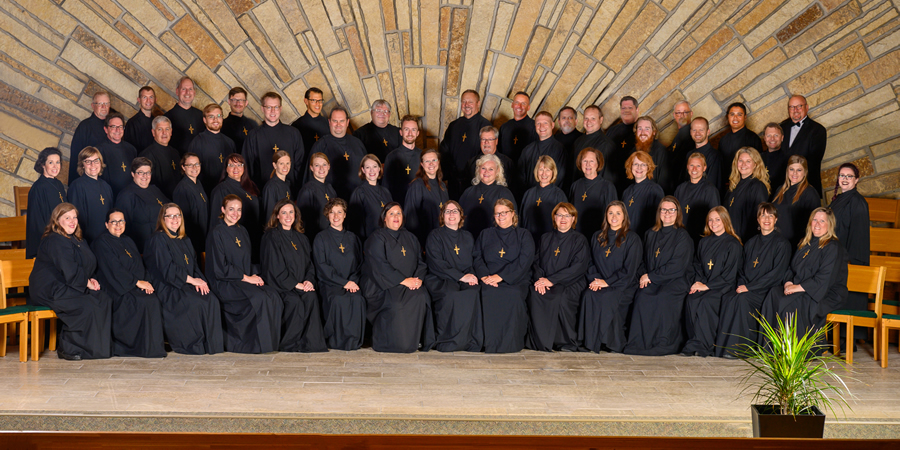 In an evening reminiscent of one in Washington, DC in the "Luther Year" of 1983 (the 500th anniversary of the Reformer's birth), when thousands of  Lutherans filled the Roman Catholic National Shrine of the Immaculate Conception with music and drama, the National Lutheran Choir (hereinafter, NLC), under the direction of David Chewien, drew an audience which filled all but the farthest reaches of the transepts to Raleigh's Holy Name of Jesus Cathedral for an eclectic program entitled "So Much to Sing About." The music was interesting and well-sung, augmented in three works by additional singers from sixteen local parishes representing several religious denominations. Organ and piano accompaniments played by unidentified musicians, as well as various vocal soloists, were not identified in the printed program.*

The program began, with the choir singing from the rear gallery, with Kenneth Dake's setting of "Sweet Hour of Prayer" (not usually found on the list of great Lutheran hymns, but beloved by many and emblematic of the broad range of musical styles embodied in this program). The group's well-blended sound was immediately evident, with only a few slightly-flat notes from the soprano section, which redeemed itself quickly in the next work: C. Hubert H. Parry's magnificent British double-chorus coronation anthem, "I was glad when they said unto me." For reasons of architecture, it wasn't possible for the two choruses to have space between them; that dimension was lost, but all eight parts were still there, now joined by the voices of the massed choir of local singers. The organ's ponderous sound unfortunately obscured much of the choirs' combined efforts, especially in the concluding section in which only the sopranos' high B-flats escaped unhindered.

Then it was time for the first of the evening's congregational hymns, as arranged by the famed long-time director of the St. Olaf Choir, F. Melius Christiansen. His setting of "Lobe den Herren," adapted by Cherwien to allow for congregational singing of two of its four stanzas, showed that the cathedral's long reverberation doesn't prevent singing hymns at a good pace, as the audience (many from nearby Lutheran parishes) filled the large space with their singing. They continued with a brief antiphon (Ps 133:1) composed by Cherwien, its text stating the evening's them: "How good and pleasant it is when kindred live together in unity." This antiphon served as "traveling music," as the choir processed down the side aisles towards the front of the nave. While still in the two aisles, the choir sang the Kyrie from the Sunrise Mass by Norwegian composer Ola Gjeilo. This haunting antiphonal work, conducted by Cherwien from the nave's center aisle, is entitled "The Spheres," with its phrases indeed encircling the sacred space. Its final section was particularly evocative, with its hints of Krzysztof Penderecki and Arvo Pärt. While one may quibble about the proper pronunciation of eleison, the sounds were beautifully sung.

Changing musical gears again, the program's next music was one of Felix Mendelssohn's a cappella psalm settings, "Jauchzet dem Herrn" (Psalm 100). (The program showed "Bartholdy" as his surname, unhyphenated, but he's most often known in the musical world by his birth name.)

The opening and closing four-part sections, for the full choir, were gorgeous. The middle sections, appointed to be sung by 8 solo voices, did not fare as well, being on the weak side in the huge space that they were to fill. Mendelssohn's unaccompanied sacred works are too rarely heard these days, which is unfortunate because they are miniature gems of the choral repertoire. Thanks to Cherwien for including this one!

More quick changes of pace followed, as we heard a Caribbean paraphrase of John 20: "Hallelu, let the people all sing!," by Edouard Toppenberg, arr. By Rufo Odor (featuring well-done rhythmic handclaps by the audience) and Larry Fleming's arrangement of the hymn "Give me Jesus," accompanied on piano.

In a difficult-to-achieve use of musical groups in three widely-spaced parts of the nave, Alfred Fedak's setting of the hymn-tune "Picardy," arranged with a recent text by Sylvia Dunstan entitled "Christus Paradox," was heard with the NLC at the front of the nave and the massed choir voices at the rear, and the Fisk organ in the gallery high above. To keep this all together, Cherwien didn't attempt to "conduct," but rather gave a large, clear beating of time that was visible to all. The resulting "surround sound" was one of the evening's most effective sonic moments.

Next, we were treated to music not listed in the program: "E'en so, Lord Jesus, quickly come," the best-known work by Paul Manz, Cherwien's most famous predecessor as Cantor (the historic Lutheran title for a parish organist/director of music) at Minneapolis' Mount Olive Lutheran Church. Perhaps because this Advent work is so much a part of today's Lutheran music DNA, it received the finest conducting and performance of the concert.

The final parts of the program brought a Ken Medema gospel song "Lord, Listen to Your Children Praying," arranged by Dake, and the Sanctus and Benedictus from Ralph Vaughan Williams' a cappella Mass in G minor. Then the "travelling music" antiphon sung by all, as Cherwien made his way to the organ to introduce and accompany the singing by audience and choirs together, of another quintessentially-Lutheran hymn, "Now Thank We All Our God."

Cherwien's preludes on hymn tunes are widely performed, and exciting to hear. It was thrilling to join in the singing, both unison and harmony reaching the heights of the cathedral's vaulting.

After the hymn, from the rear of the nave, the NLC and a tenor soloist sang the familiar words of the hymn "O Love that will not let me go," with recent music by Timothy Angel. The balance between choir and the high-above-in-the-gallery organ was problematic, but the a cappella third stanza was beautifully sung. There was better balance between choir and organ in the final stanza, the singers' tessiturae being higher. Next came Alexander Gretchaninov's Nunc Dimittis, with impeccable English diction, followed by the massed choir's rendition of the gospel tune, "Guide My Feet," arranged by Avis Graves for chorus and piano.

After a well-deserved round of applause, the NLC sang an encore: another of F. Melius Christiansen's chorale settings: "O Day Full of Grace," to the Danish tune "Den signede Dag." This Pentecost hymn, long popular in the Scandinavian-American parts of the Lutheran communion, was a fitting and heartfelt close to the NLC's program.

There was a logic to the program's sequence of musical works, but that logic was a textual one, rather than a musical one. The constant changes of style seemed disconcerting, as if one were watching a foreign film with subtitles which changed their language every few minutes. The inclusion of a longer work (perhaps the entire Gjeilo mass, or the entire Vaughan Williams mass) would have obviated this disjunct feeling. Nevertheless, the NLC's adeptness at moving rapidly from one musical style to another is a credit to them and to their conductor.

(One final thought: The naming of choral groups can rival T.S. Eliot's "The Naming of Cats" in interest. The National Lutheran Choir comprises 58 singers, mostly, if not all, from Minnesota. It's no more "national" than the former National Lutheran Chorus, based in Washington, DC, many decades ago. If it were truly representative of all Lutherans in the U.S.A., it wouldn't be nearly 100% white, for that matter. So why "national?")

*A note under a listing of congregations who participated in the massed choir cited Karl Zinsmeister of White Memorial Presybterian Chuch as conductor and John Jahr of Raleigh's Good Shepherd Lutheran as organist. We are gratedul to NLC's Adam Reinwald for bringing this to our attention.