Bach Sparkles under the Hands of HIP Musical Artists 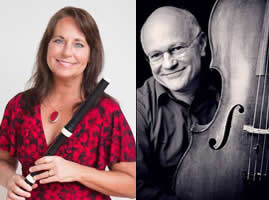 The HIP Festival Orchestra, made up of members of the NC Baroque Orchestra and Mallarmé Chamber Players, presented a program titled "We ♥ Bach" at First Presbyterian Church. It featured three of the sparkling Brandenburg concerti (Nos. 4, 5 and 6) and the Orchestral Suite No. 2 in B Minor, S.1067.

The gathering of superb Baroque period musicians was directed by the universally acclaimed Jaap ter Linden. After a long history of historically informed performances through out Europe, as well as in Japan and Australia, he has resided in the United States since 2016.

Bach did not travel widely as many of his fellow composers, but he collected numerous scores from those who did travel and studied them avidly. He was not then and is not in today's retrospect known as a significant innovator. However, his mastery of form, harmony, melodic musicality, and counterpoint is recognized and admired universally among musicians and audiences as well.

Although most of his duties in Leipzig had to do with church work, there was also the Collegium Musicum, a series of weekly community secular concerts. The Orchestral Suite No. 2 was likely composed for one of these around 1738-39. It may have been the last secular orchestral work he composed.

The featured soloist was the remarkable flutist Kathie Stewart. Her masterful and energetic control amazed from the stately "Ouverture" through all six dances to the breath-taking "Badinerie."

"Our music owes everything to Bach." ‒ Nikolai Rimsky-Korsakov

During Bach's years in Cöthen, his duties focused on keyboard and secular instrumental music. It is likely that the six concertos we know today as the Brandenburg were composed in this setting. Later Bach put them together to satisfy a commission from Christian Ludwig, Margrave of Brandenburg.

Brandenburg Concerto No. 5 in D Major, S.1050, featured Stewart, violinist Janelle Davis, and harpsichordist Jennifer Streeter. The flute, violin, and harpsichord contrast with the string orchestra to begin. Toward the end of the first movement the harpsichord launched into an amazing lengthy cadenza. Streeter's jaw-dropping performance led into the warm and beautiful Affetuoso second movement. The flute and the violin played together at times and in imitative passages almost pursuing a fugue at times. In the third movement a lively gigue and fugue engaged the three instruments again in a happy ending.

"Next to him, all others seem like children." – Robert Schumann

Brandenburg Concerto No. 6 in B flat major, S.1051, is scored for six strings and harpsichord but, notably, no violins. The soloists were violists Suzanne Rousso and Joey O'Donnell. The supporting instruments were two viols di gamba, two cellos, and a violone. The energetic canon that starts the first movement had a gentle rolling effect which, it seemed, could have gone on forever. In the second movement, Adagio, the two viols da gamba sat out completely, allowing the two violas and continuo to do a gentle lullaby as a trio sonata. Then the closing allegro brought the concerto, and the set of six, to a happy calm conclusion.

"[Bach's music] fills me with awareness of the wonder of life, with a feeling of the incredible marvel of being a human being. The music is never the same for me, never. Each day it is something new, fantastic and unbelievable. That is Bach, like nature, a miracle." ‒ Pablo Casals

The closing selection on the program was Brandenburg Concerto No. 4 in G Major, S.1049. The soloists were Francis Blaker and Kathie Stewart, recorders, and David Wilson, violin. All three solo instruments were engaged in all three movements. The first movement had the recorders starting off in the lead, but the violin jumped into their dialogue with a fantastic display of range and agility. The second movement, Andante, allows the three soloists to interact equally and in balance with the full orchestra. The closing presto movement was pure Bach genius: fugue, remarkable counterpoint, and complexities that challenge the best.

Bach's sonic imagination was seemingly limitless. These ingenious orchestral works demonstrate the depth of his musical genius and ability to speak to us across generations.

"Bach's œuvre? A colossal achievement, a kind of gothic cathedral of vast and wonderful carvings that defy the imagination." – Camille Saint Saëns

For a companion review of this remarkable concert, click here.