Pagliacci Still Has What It Takes 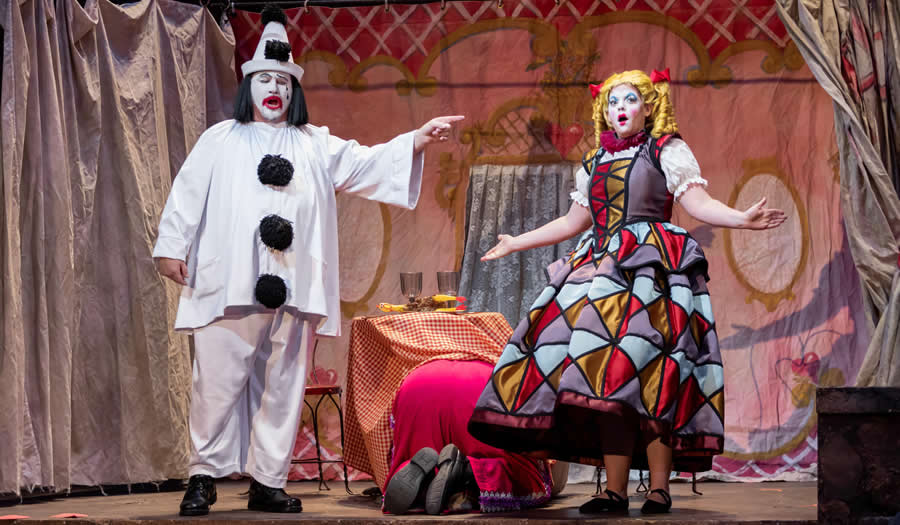 The North Carolina Opera has put together a treat of dramatic intensity with a very fine production of Pagliacci, currently on view at Memorial Auditorium. The cast, the orchestra and the chorus deliver all you would ask in this powerful barn burner.

Ruggero Leoncavallo composed nine operas, most of which were his music and his libretti. The only one that achieved significant recognition was his second, Pagliacci (Clowns, or Players), written in the verismo style and based on an actual event from his own family history. It had several things going for it. First, it was a masterful dramatic realization both musically and textually. Its premiere in Milan was conducted by the remarkable young Arturo Toscanini, who also conducted the world premiere of Puccini's La bohème in that same year (1892).

It never hurts an opera to have a sensational dramatic tenor aria that you can't get out of mind, and Canio's "Vesti la giubba" certainly fits that bill. In 1904 it was recorded by Enrico Caruso. It sold over a million copies and the recording retains the vibrant quality of Caruso's voice and the dramatic richness of Leoncavallo's expression of a wide range of moods, from manic humor to murderous rage. In this famed aria, Canio muses on the challenges of playing a comedic role while his heart is breaking.

All these factors play a part in the solid footing Pagliacci has established in opera repertoire world-wide. A large crowd assembled Friday night to reaffirm the public's continued love and appreciation of this grand music.

A wide range of artistic talents and technical skills were required in putting this multi-facetted production together. The cozy set depicting a rural Italian town was designed by Constantine Kritikos and provided by the New Orleans Opera Association. It takes a lot of people and a significant amount of cooperative technical labor to put together an opera performance, people like stage director, lighting designer, production manager, costume coordinator, wig and make-up designers and much more. Then it needs talent and training to make sure every detail is covered.

Pagliacci is cast in a Prologue and two Acts. Tonio, the clown, introduces the play in the Prologue and reminds the audience that actors feel love and joy as well as disappointment and sorrow just like anybody else. Tonio was sung by baritone Kidon Choi who has appeared at the Metropolitan Opera in Madama Butterfly, La fanciulla del West, and Otello. His rendition of the Prologue was touched by subtle humor and reached a soaring climax as the Prologue curtain fell.

Scott MacLeod has been NCO's excellent chorusmaster since 2013. In this production the villagers who are big fans of traveling shows were played by members of the chorus. They welcomed the troupe to their little community enthusiastically. They were amused, they were shocked, they were off to Vespers at Church and were excellent throughout. They were trained actors and actresses in crowd scenes as well as outstanding choral singers. It was a special joy to have the KidZNotes Children’s Chorus on stage.

The NC Opera Orchestra was led by Keitaro Harada, who did an excellent job of keeping the long ends of the orchestra pit and the middle. but deep, stage activity all together and on the beat. The  orchestra made a gorgeous lush sound and was always conscious of balance between singers and orchestra. Harada made his NCO debut in 2011 conducting Benjamin Britten's The Turn of the Screw and returned last season for Carmen. He is currently the music and artistic director of the Savanah Philharmonic in Georgia.

American tenor Carl Tanner played a solid and robust Canio in today's production. I believe he put just about all he had into "Vesti la Giubba." Frankly, I was surprised to feel a warm tear trickle down my cheek. He was seen previously as Samson in the NCO concert performance of Samson et Dalila.

The unfaithful Nedda was played by Melinda Whittington, who made her NCO debut as Ada in Cold Mountain a few years ago. She was outstanding as the confused and unhappy young wife.

Silvio and Nedda reaffirm their love in a soaring duet near the end of Act I and Silvio persuades her to run away with him after the evening show. Silvio was sung by Takaoki Onishi who made his NCO debut as Morálès in Carmen last season.

As the play moves along Canio, playing Pagliaccio, loses all control of his bitter jealousy and fatally stabs Nedda. When Silvio rushes to intervene, Canio disarms him and stabs him. Turning to the audience he announces, "La commedia è finita!"

The show was well-balanced, moved along at a comfortable pace and was a satisfying pleasure.

This opera repeats Sunday, January 26. See our sidebar for details.