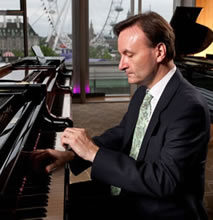 A performance of either of Johannes Brahms' two piano concerti is an occasion not to be missed. Before hearing it at Meymandi Concert Hall in the first of two concerts (it's to be repeated on Saturday, January 25th), however, the audience was treated to an overture (Overture No. 1 in E minor, Op. 23) by the little-known but being rediscovered Parisian composer Louise Farrenc. This is a stand-alone overture, rather than the opening section of an opera or other major work; it's brief ( c. 6' ), well-crafted (save its dependence on scale passages in its final section), and owes a debt to Felix and Fanny Mendelssohn for its harmonic language. Previously unknown to me, the NC Symphony's spirited performance made me want to hear more of Farrenc's music, which includes several symphonies. Thanks to Maestro Grant Llewellyn for adding this new/old work to the repertoire.

Next came Franz Schubert's curious Symphony No 4 (in C minor, D. 417). Written when Schubert was only 19, it shows a composer who is already a master of his craft, but who is still searching for how best to express himself. He is experimenting with tonality changes, with rhythms, with dynamics — in short, he is trying to find out just what kind of music is his voice, and only his. This symphony, called "Tragic" simply because Schubert at some point wrote that word on the concluding page (with no explanation), is in four movements; only the first might be felt to justify that appellation.

Llewellyn's concept of this symphony was convincing. Each movement presents challenges of interpretation; the NC Symphony met these challenges superbly. The opening Adagio molto - Allegro vivace, echos Beethoven, for whose funeral Schubert had been a torch-bearer the year before his own death. Its lively articulations and sudden dynamic changes were the first evidence that this performance was special. The following Andante was a study in contrast, with the strings now lyrical and the woodwinds spinning out slow 8-bar phrases that were beautifully-done, enough to warrant forgiveness for the brief moment of minor intonation problems. The third movement, while called a Menuetto, is also marked Allegro vivace; its quirky opening rhythm, combined with that tempo, suggested a minuet danced with two left feet, but it was nevertheless scintillating. The final movement, definitely not "tragic" in mood, danced along through strings/winds dialogues and experimental changes in tonality. A fine performance in every respect of one of Schubert's less-often-performed symphonies.

After intermission, the renowned Stephen Hough took the stage for the concert's featured work, Brahms' Piano Concerto No. 2 in B-flat, Op. 83. Hough, who is as close to being a "Renaissance Man" as one can be in this era of unbridled knowledge, brought a rather Lisztian approach to Brahms' piano score, infusing it with more rubato than one usually expects, coupled with a percussive "Sturm und Drang" technique often associated with this composer's Piano Concerto No. 1. Llewellyn, a childhood friend of Hough, was attentive to the pianist's every bending of a phrase, the two musicians "in sync" with each rubato caress of a rhythmic line.

Llewellyn is an excellent collaborator with concerto soloists, and tonight was no exception. The orchestra contributed their share of pyrotechnics in the second movement Allegro appassionato, then followed the lead of principal cellist Bonnie Thron as her gorgeously-heartfelt solo opened the third movement Andante. Even with a tempo on the fast side of "andante," this slow movement's mood was finely shaped by Hough; when it closed with a return to Thron's 'cello solo interwoven with the piano's filigree, time was suspended for a moment. Indeed, that moment could have been longer, as Llewellyn moved immediately into the jocular finale, which danced like one of Brahms' Hungarian dances and was adorned by an immaculate decrescendo where orchestra and piano alike combined in the long sequential series of phrases, each more quiet than the one before.

[Asides: 1. The Steinway concert-grand's middle register seemed in need of voicing, as it was less bright than the instrument's excellent treble and bass registers. 2. Hough should reconsider his habit of ending each movement with an overly-dramatic recoil from the keyboard, even when a movement ends with a sustained chord. 3. In addition to Thron's solo, principal French hornist Rebekah Daley's solo (which began the Brahms concerto) showed the high level of musicianship and technique which permeate this orchestra.]

As the audience rose to its feet to acknowledge the performers at the concert's close, conductor and pianist exchanged a hug: a collaborative greeting celebrating a noteworthy (no pun intended!) musical collaboration.

As mentioned, this performance repeats Saturday, January 25. See our sidebar for details.