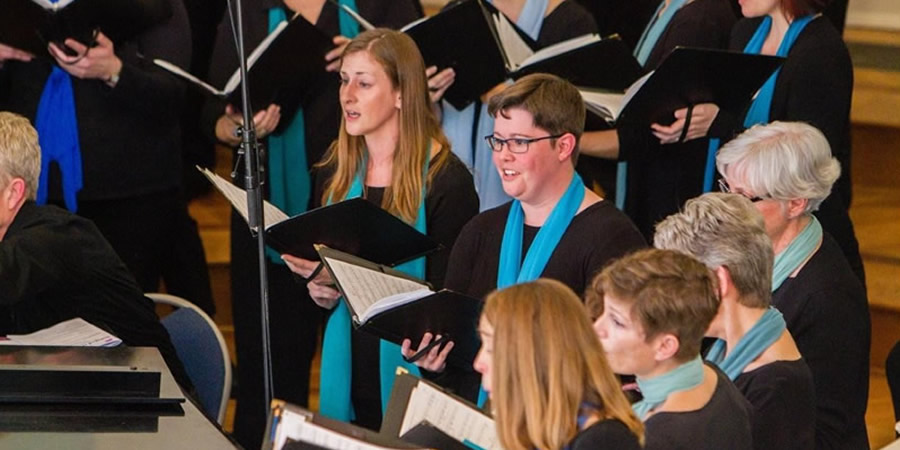 As I walked into Chapel Hill's University Methodist Church on Saturday afternoon before the concert of the 60-member Women's Voices Chorus, I immediately experienced the animation of audience members visiting with each other in keen anticipation of this program. Attendees were there for various reasons, for this marked the debut of the Chorus' new conductor, Laura J. Sam, a prominent choral music educator in North Carolina. Further interest of audience members resulted from the participation in the concert of Carrboro High School's twelve-member Women's Ensemble, carefully prepared by their conductor Valerie Puhala.

The concert became an experience for the singers to confront the difficult national and global issues of our time. The program, entitled "Breathe Hope, Sing Hope," served as an opportunity for choristers young and old and the audience to be heartened not only by the texts but also by the musical style and interpretation of the compositions. In the preface to her program notes, Sam writes: "The shackles of despair, war, and separation fall as we sing of hope, peace, and connection. Our songs are composed in the language of souls, expressing themes of justice, grace, love, and compassion. Our music today asks of us and our listeners essential questions: What do we choose to build: walls or paths? Do our words ignite fires of anger or do they plant seeds of peace? Where is our respite when the world fills us with despair? How does love transcend barriers of separation and death?"

The program consisted of twelve works, all by fairly recent women composers, with one gentleman collaborating with a woman. It is interesting that the majority of their birth years fall from the late 1950s and late 1960s, a time of considerable turbulence in the U.S. Of the thirteen composers whose works were performed on the program, all were born between 1949 and 1980. Their works provided a delightfully diverse selection of contemporary works for voices, some a cappella, others accompanied by a variety of instruments, including piano. Deborah Hollis is to be commended for her accurate and supportive role at the piano.

The program opened with an introductory selection in which the two choirs surrounded the audience on all four sides of the sanctuary of Chapel Hill's United Methodist Church to sing, "A Path to Each Other" by Jocelyn Hagan and Timothy C. Takach. This configuration symbolized in an impressive way its succinct text: "Each word a stone / We can build a wall / Or a path to each other."

Once on stage, they proceeded with various combinations of singers, some accompanied by instruments. The first one, "My People Are Rising" by Carol Barnett, involved an alternate voice by violinist Erika Atchley, one of the outstanding freelance violinists in the Triangle. Her golden-rich sound played a role reflecting the text sung by the Women's Voices Chorus (WVC). The structure of its key in G was based on a modal scale of origin from the Middle East and/or India, containing four half-steps equally spaced within the octave. The painful qualities expressed in that scale paralleled those qualities in the text. Victoria Nelson joined with a doumbek, a drum from the Middle East.

Another work sung later in the program, "The Peace of Wild Things" by Sean Ivory, made use of a viola as a counter-voice to the feelings in the text. Jacob Hermsen, violist, teacher and freelance player in the Triangle, also produced a rich, beautiful tone.

The WVC Chamber Choir was joined by cellist Joyu Lee, who contributed nicely to "Nada te Turbe" by Joan Szymko. Finally, the last use of common and unusual instruments occurred in Carrboro High School's Women's Ensemble's performance of "Lineage" by Andrea Ramsey, whose score included two doumbeks. These drums, played by two unnamed individuals, added considerable vitality to the work that was sung so well by the young people.

The instrumental additions went a long way in the expression of feelings found in the text, for they "sing" and reflect pure feelings without words.

Besides the opening choral selection, in which the two choirs surrounded the audience, later in the afternoon's selections, they joined again for a medley of "Swing Low, Sweet Chariot," a well-known spiritual, arranged by Rosephanye Powell. Appearing nearly in the middle of the program, it felt like an old friend in the midst of the beautiful array of newly-composed pieces.

In addition to "Nada te Turbe," WVC performed "I Sing That My Voice May Be Heard" by Gwen McLeod Hall. Since the latter piece appeared third on the program, that was the first time in the concert we heard the chorus sing a cappella. The richness and depth of character of their sound made me sit up on the edge of my seat with pleasure. The piece titled "1941" by Andrea Ramsey speaks to the separation of a parent from their son, apparently near the beginning of U.S. involvement in WWII. The very active rhythms found in the first portion of the poem recede toward the end into very somber musical reflections. Rachel Spencer, soprano in WVC and the Chamber Choir, the soloist in Judith Watson's "Shule Agra," energized the piece sung by the WVC Chamber Choir with its dynamic phrasing.

The final three pieces on the program featured themes of light, peace, and the promised land. "Faith is the bird that feels the light" by Elizabeth Alexander also featured Spencer as soloist; her spirited voice added a lively dimension to the piece. "The Tree of Peace" by Gwyneth Walker and "Now Let Me Fly," arranged by Stacy V. Gibbs, concluded the program with deeply moving messages of hope, sung from the hearts of the singers.

In this program, Laura Sam has read well our collective psyche.

The remarkable Women's Voices Chorus is embarking on its 27th season. Founded in 1989 by Mary Lycan, she remained as conductor for 14 years, sharing her enthusiasm for literature for women's voices along with unearthing a number of unknown but beautiful works during her tenure. Her innovative programming left an indelible mark. She also published an article, "Repertoire for Women's Choirs," in the April 2000 issue of Choral Journal. The second conductor of WVC, Allan Friedman, in his tenure of 12 years, increased the chorus' musical skills in addition to composing a number of works for the Women's Chorus.

We in the community do welcome the group's third conductor, Laura J. Sam, and look forward to the many skills and gifts she has to offer the Women's Voices Chorus as it continues to provide a place for women to share the joy of singing together, promote choral works by and for women, and strive to continue increasing its high standards of musical excellence.

This program is supported by the Orange County Arts Commission and by the North Carolina Arts Council, a division of the Department of Natural and Cultural Resources.