Kitchen Returns to St. Stephen's with a Bravura Recital 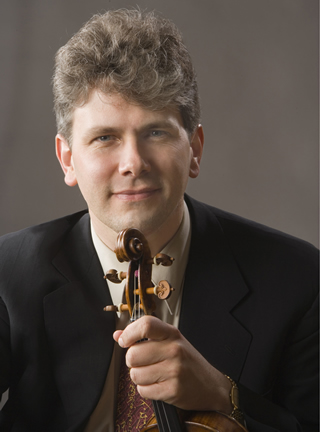 Nicholas Kitchen is no stranger to Durham's St. Stephen's Episcopal Church. As a child of the parish, where his father has long been resident musician and his mother, a noted violinist and pedagogue, he has frequently been featured in the church's annual concert series, often in tandem with another parishioner, noted pianist Andrew Tyson.

Kitchen is no longer the boy-wonder violinist who assisted his father at the organ console; now 53, he is a world-renowned violinist playing a "del Gesù" Guarneri violin, a teacher at the New England Conservatory (NEC), the first violinist of the Borromeo Quartet, a husband and father, and a peripatetic musician who returned from multiple concerts in Hong Kong only three days ago ‒  and who will soon perform in Mexico after some time at his home base in New England.

For this marathon program (more than 90 minutes), Kitchen was joined by pianist Sean Gallagher, a NEC colleague who brought his own set of stellar credentials as a performer and a teacher. His considerable pianistic skills were especially evident in demanding sonatas for violin and piano by Beethoven and Fauré.

In introducing the artists, the parish's rector, the Rev. Robert Kaynor, commented on the transforming power of music: how it changes those who create it, perform it, and listen to it. The audience's collective riveted attention gave proof of the power of the music on this program: Theme and Variations (1932) by Olivier Messiaen, Sonata No. 7 in C minor for Violin and Piano by Ludwig van Beethoven, Introduction and Rondo Capriccioso in A minor, Op. 28, by Camille Saint-Saëns, Rhapsody No. 1, Sz. 86 (1928), by Béla Bartók, Sonata No. 1 in A for Violin and Piano, Op. 13, by Gabriel Fauré, and "Tzigane" by Maurice Ravel.

In the pre-concert discussion, the musicians talked about Messiaen's predilection of thinking about music in terms of color and how that was brought out in his 1932 work. The violin's melodic line was joined by the piano's colorful harmonic "halos," sometimes even crystalline in the sonorities they produced.

In his 2012 review of Kitchen and Tyson's performance of the Beethoven Sonata No. 7, the late William Thomas Walker wrote, "Listeners needed 'seat belts' to hang in with the duo as they soared through the fast movements." This was true in this performance, with the caveat that too much of the violin's sound was overwhelmed by the piano's volume. The most successful movement was the third, the Scherzo, where the major mode takes over from the work's root key of C minor and the musicians echo each other in a folk-tune-like melodic interplay.

Saint-Saëns' well-known showpiece (which Kitchen first played at age 15!) brought the recital's first half to a brilliant close, highlighted by what can only be called Kitchen's "dancing fingers." As one violinist commented about the cascades of notes, "you can't even THINK that fast!"

Opening the program's second half with the Eastern-European flavor of Bartók's Rhapsody was a way to illustrate how similar musical elements can appear in otherwise disparate works: the Hungarian folk-tune in the Rhapsody echoed the folk-like tune in the Beethoven Scherzo. It was beautifully played by both artists.

The second half's centerpiece was the marvelous Fauré sonata, all the more a compositional tour-de-force when we realize that it was this composer's first-ever attempt at writing for violin. While the brilliantly-played fast movements were again in need of less piano volume, the second-movement Andante was the highlight of the concert. As the sun's light dimmed and the brilliant colors of St. Stephen's imposing stained-glass windows faded, the colors of Fauré's music took their place. Kitchen's Guarneri was equal to the music's challenges, bringing out the lyricism of the French Romantic language with wonderful caresses of the bow. Even Messiaen would have approved as this music's palette of sound was brought to life.

The concert closed with Ravel's famous "gypsy" work, which begins with an extended passage for violin alone. What a gorgeous sound in the welcoming acoustic of St. Stephen's nave! The work's conclusion brought the audience to its feet with a well-deserved ovation.

A closing note about instrumental balance: pianists need to recognize some facts about physics when performing collaboratively with a violinist (or other instruments, for that matter). A violin is some 18" long and has four strings; the average concert grand piano is between 6' and 9' long and has some 230 strings. A violinist can play, at most, four notes at once (well, almost at once); a pianist can play at least twelve notes at once. A violin has no sustaining pedal; the piano has one, which can serve to increase its sonority. It's basic physics: there is simply no way that a violin and a wide-open-lidded grand piano can balance well when both performers are playing at their utmost full fortissimo. The solution is simple: close the piano's lid to its shorter setting. This recital was by no means unique it its balance problems; I heard the same Fauré sonata performed at UNCG a few years ago, where the violin was swamped by the resident nine-foot Steinway grand. End of lecture, but this is an ongoing problem which should be addressed.

Kitchen will return to St. Stephen's on March 29 with his Borromeo Quartet for an all-Beethoven program. CVNC's William Thomas Walker will be remembered at this event. See our calendar for details.